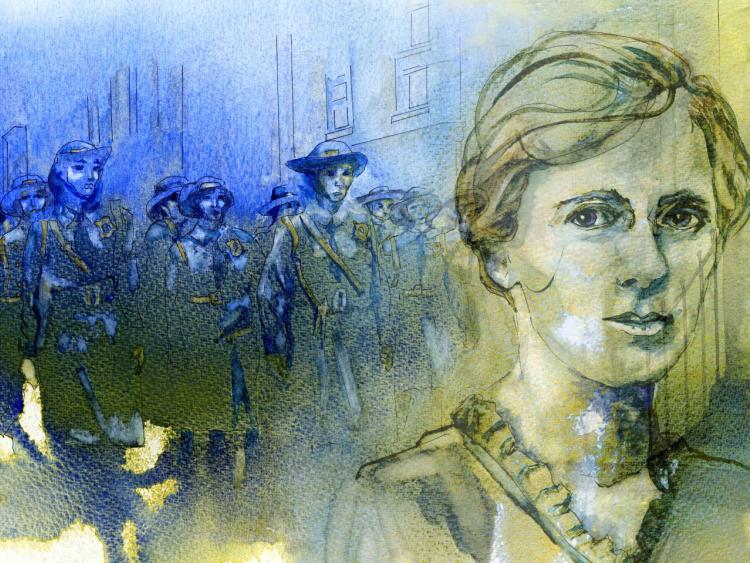 Continuing with the schedule of centenary themed exhibitions, the launch of ‘Kathleen Kingston – the strength of a woman from Birr’ will take place in Áras an Chontae, Tullamore on Thursday 27th October at 6:30pm. The exhibition will feature images printed on linen and cotton by artist Hazel Greene, a visual artist and designer, based in her studio in Shinrone.

Hazel Greene trained in the Dun Laoghaire Institute of Art and Design (1994-1998). She was awarded Accessory Designer of the Year 2015 and in 2016 was accepted as a member of the Council of Irish Fashion Designers.

Hazel explains; “When I set out to find a subject for my 1916 project, I was delighted to come across Kathleen Kingston, a woman from Birr, my local town; who went to school in the Convent in Roscrea, as I did; and who moved to Dublin, again as I did; and who sold women’s clothing in Nassau Street as I do now – I reckoned this was a story I could tell.  As an artist who works in textiles, I thought I’d tell this story in the textiles you would have found in Kingston’s shop.”

Kathleen Kingston was baptised Catherine Mary and born into a prosperous shop keeping and land owning family in Birr. There was a strong Celtic movement in Ireland at that time.  This Celtic movement appealed greatly to Kathleen and she joined Irish language classes, held in Green Street, Birr, run by the Gaelic League.  It was here she met Cathal Brugha (born Charles William St John Burgess, educated in Belvedere College, Dublin) who travelled around Ireland with his work and in support of Irish culture.  Cathal and Kathleen were married two years later.

Now known as Caitlín Brugha, neé Kingston, she joined Cumann na mBan.  Widowed in 1922 with six children under the age of 10, Caitlin went on to campaign and won two Dáil elections, 1923 and 1927. In accordance with Sinn Féin policy of the time she did not take her seat in Dáil Éireann. Caitlin opened and ran a successful men's clothing store, Kingston's Ltd. in Dublin for many years. Caitlín Brugha, neé Kingston died in 1959, aged 80.

The exhibition will be opened by her grandson Professor Cathal Brugha.  Georgie Kingston, Kathleen’s niece who lived with her, and who is the daughter of Kathleen’s brother Charles, a previous Offaly County Secretary, along with many other family members, will be attending the exhibition launch on Thursday 27th October at 6:30pm.

‘Kathleen Kingston – The strength of a woman from Birr’ exhibition will be open weekdays from 9:30am to 4pm.  The exhibition is free and will continue until Friday 18th November in Áras an Chontae Tullamore. All are welcome to attend. For more information please visit www.offaly.ie/2016