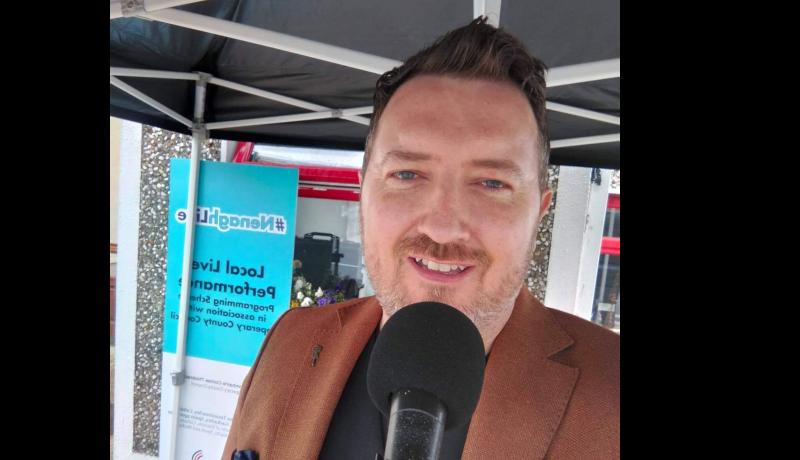 Colin Kenny, known to country music fans nationwide as 'the singing barber', is back with new music this week, as the Banagher man releases his latest single, Rockin and Rollin.

The latest cut to be taken from his official debut album, Annie, Rockin' And Rollin' is set to continue Kenny's rise to prominence as one of the country scene's newest singer/songwriters of note. Co-written with Tipp man Brendan Carroll, the track's feel-good, nostalgia-tinged vibe comes at a perfect time as venues begin to reopen and 'live' music once again becomes an intrinsic part of so many peoples' lives.

For Kenny, based in Borrisokane where his recently opened hair studio is located, getting back in front of his fans again - in real life - has been a beautiful feeling...

"There's no feeling like it! And every time you get to introduce a new song, especially when it's an original and one that you've had a hand in writing, you're reminded of that thrill that comes with having a 'live' audience in front of you. There's a certain kind of buzz that comes from connecting with people like that, and it's nearly impossible to replicate. I was back out this weekend as part of the Nenagh 'Live' event when it came to Borrisokane on Sunday, and then an acoustic session in the Green Bar that evening as well, and I'll tell ya, it's good for the soul," Colin said.

While Kenny is now back bringing smiles to faces in person again, playing tunes like new single Rockin' And Rollin', and previous hits You've Got That Something, Will You Dance With Me, Annie?, I'm A Country Singer, and more from his own catalogue, it was his regular Facebook 'Live' shows that did so much to keep peoples' spirits up through the difficult and often lonely times of the last year and more. And even though he's back on the road again now, he has no plans to call a halt to those intimate performances.

"Definitely not," he said, "They've become a very important part of what I do now, and they're a great way of connecting with fans as well. With an actual gig, it's not always possible for people to travel to see you, but when you do something online, you can have fans joining you from all corners of the country at once, and that's a lovely feeling. What has happened a lot as well, is that I'd play some of my new songs for the first time during these online shows and that's proved to be a great and very rewarding way of bringing new material into my set-list. So that's something that I plan on continuing, for sure."

Rockin and Rollin', the brand new single from Colin Kenny (co-written with Brendan Carroll) will be available on all platforms from Friday, October 1, and is available to pre-add/save now. The single is also available to request from radio stations nationwide. You can follow Colin on Facebook at Colin Kenny Music.

MEMORY LANE: Out and about at 'The Chain Gang' at The Palace in Tullamore (2010)