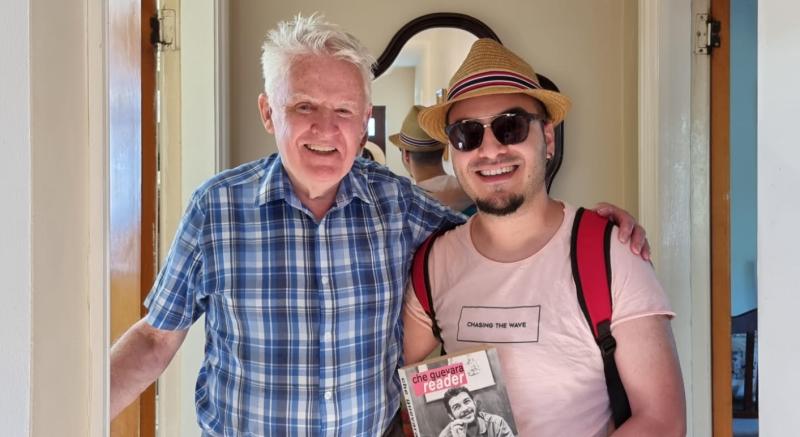 Cagdas with the owner of his Galway accommodation, Larry, who presented him with a book on Che Guevara

We left Tullamore on Sunday early morning of July 18 and preferred to travel by train to the City of the Tribes. Traveling by train in Ireland is both comfortable and safe. The only downside of this journey is that train transportation in Ireland is relatively expensive. At a time when we feel the effects of global warming and witness the world disasters, the public transportation has to be provided more and the impact of individual vehicles on our lives has to be reduced. For this reason, it should be organized public transportation better and this service should be offered to people as cheaply as possible. This is important not only for the benefit of the public, but also for the future of the world. Of course, I must state that I made all these evaluations without ignoring the destructiveness of industrial production. It's not a good sign that my second summer in Ireland has been surprisingly hot.

We arrived at Galway train station at 11 o'clock. Enjoying the sun, we took a long walk towards Dun Roamin where we stayed. As we passed Eyre Square/Kennedy Park, we let ourselves go to the crowd we missed. In Galway, we found everything we missed a lot during the pandemic. The intensity of the people and the music played in the square was like a therapy against the stress of a whole year. By this means, we remembered once again that human beings are inherently social creatures. As I walked the historic streets and passed by Oscar Wilde and Eduard Vilde's statues, the legendary words of the great poet Oscar Wilde in The Ballad of Reading Gaol were reviving.

Yet each man kills the thing he loves

by each let this be heard,

some do it with abitterlook,

thecowarddoes it with a kiss,

the brave man with a sword!

While I was walking around the historical streets of Antalya, the same line of poetry revived in my mind, and I was feeling like touching the thousands of years old stone walls. What you call history is the messages your ancestors left in the bottle. That's why it is quite important to protect the historical texture of a city. Galway, with its long coastline and narrow streets, reminded me a lot Roman Emperor Hadrian's Antalya. Galway was founded by 14 merchant families at the time the Normans ruled the region. It can be said that the foundations of the city were laid in 1124. The Latin name of the city is Galvia. The inhabitants of the city are called as Galwegian. The city also has the nickname "City of Tribes" (Cathair na dTreabh) because of the fourteen merchant families called the "Galway tribes" who ruled the city during the Hiberno-Norman period. The families that built the city are: Athy, Blake, Bodkin, Browne, Darcy, Deane, Font, Ffrench, Joyce, Kirwin, Lynch, Martin, Morris, Skerrett. One of the families draws attention in particular. It is Patrick Lynch who was born in Galway in 1715 and one of Che Guevara's ancestors.

The place we stayed was very close to the coastline, the area known as Salthill. As I was walking towards here, I saw Che Guevara's poster on a lighting column on the street. This poster references his Galway roots.

That's why I talked to Dun Roamin's owner, Larry to know about it. We were very happy with the place we stayed and especially the location. Being quite close to the city center is a great opportunity to do research and answer your questions. Accommodation was very affordable, including breakfast. I was also amazed the old Irishman Larry's determination to work and his communication with people. I can say that I have gained great experience in every communication I have, especially with older Irish people. Maybe we make a big mistake when we describe people with various adjectives. The Irish are very young in spirit and I learn a lot from them every time. When I asked questions about Che, Larry showed me what he brought as a souvenir from his Cuba travel. He also gave me a book he brought from Cuba about Che's life so that I wouldn't get bored while spending time in the room. Everyone I spoke to and asked in the city said that there was no museum or cultural center that reflects the spirit of Che, whose origins were in Galway. Despite this, I care that Galway is the intersection point of his historical spirit and an important name that shapes the world history. when I passed under the Spanish Arch, I was fascinated with young people dancing under the arch.

With black men, white and beautiful women, they passionately reminded us of the Irish spirit, despite the world going badly. This passion under the hot sun should be a lesson to all racists. In the city, where the wind carries salt water to our lips, it was very special to hear the cry of seagulls and the vivacious sound of people in pubs. While trying to warm up in the cold waters of the ocean and walking around this city we fell in love with every moment of time we spent there. Among all these poetic memories, also we took a fantastic time travel inside the Galway City Museum. The most impressive part of the museum was the section where artifacts from the Easter Uprising and the Civil War were exhibited. Seeing the uniforms and weapons of all these men and women who believed in their idea transports one back to that unique moment of the rebellion. It was a nice feeling to observe the architectural gifts that people left to nature and humanity while visiting one of the largest cathedrals in Europe after the museum.

The cathedral was built in 1965 using local limestone. The cathedral, which has Renaissance and Gothic features, also draws attention with its huge dome and curved arches. The cathedral acoustics is incredibly good and various concerts are held here. At that moment, I imagined St. Antuan Catholic Church in Istanbul and the concert given by Gevende Turkish band in this church. It is quite tragic that Turkey is now far from this beautiful atmosphere. When leaving Galway on July 21, Dun Roamin's owner and a big fan of Elvis Presley, Larry wanted to give me the book he lent me. Although I reminded him that it was a precious memory for him and that he had gotten the book from Cuba, he insisted that I accept this gift. The sharing and kindly spirit of the Irish people once again gave me a unique memory that it will be never forgotten.