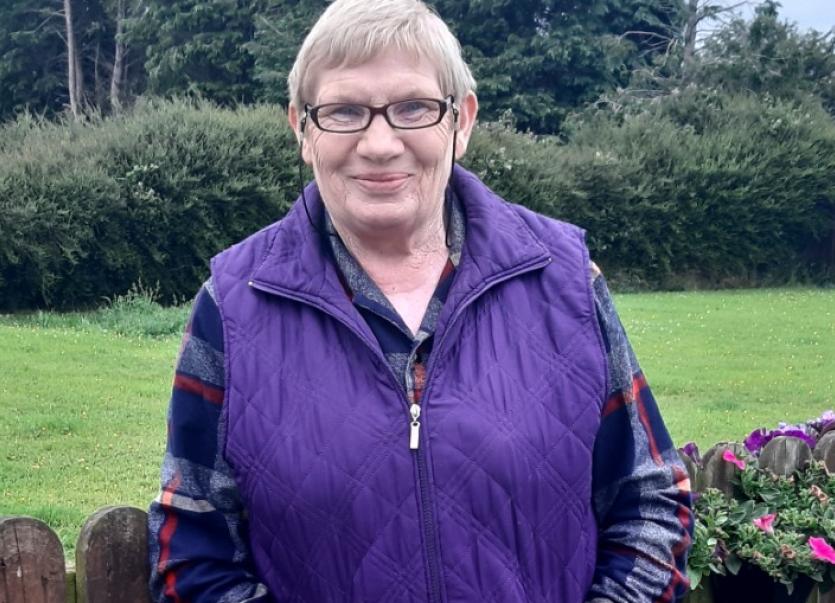 I came from Killoneen, Daingean. My mother was Maureen Gorman, my father was Tom Christle they got married and had six children, Josie, myself, Kathleen, the late Michael (who died tragically in Australia in 1988), Jeanette and Maureen. In the same year that Michael died I had a bad stroke which affected my mobility and cognitive function. Thankfully I recovered with support of family and friends and was left with a slight disability. Thanks also to the great staff of the Irish Wheelchair Association in Ballinagar where I attend.

My mother and father worked very hard raising all of us. We had a small farm of six cows and had our own milk and butter. I remember my mother churning the butter. We also had hens and used to collect the eggs. We grew our own vegetables, potatoes and cabbage. As kids we worked hard picking potatoes and my mother thinned beet. My mother was a great cook and was well known for her brown bread recipe. But unfortunately the recipe was not shared with any of the family. I remember her so well selling fresh brown bread and scones around the Daingean area and they were very popular. My mother also taught as a substitute teacher in Killeigh school, both the old and new school buildings when required. We also kept greyhounds and were fortunate to have a greyhound called Honeypot Lady who was probably the most prominent, winning a big prize and I remember huge celebration after.

I went to school in Daingean and Esker and we had a long cycle to get to school and discipline was much stricter back then. I went to a dance on Easter Sunday and met this red curly haired man. His name was Tom Egan, we hit it off very well. When we were “going out” we travelled to dances in the Harriers and the Central ballroom and to the pictures and out for meals in Tullamore.

Tom and I got married on 31st March 1975 and moved to Lockclose, Killeigh. My late husband Tom came to Killeigh when he was 13 years of age. He would have been in Killeigh for 60 years. He had a great memory for recollecting stories. My first introduction was to the Conroy family, Liam and Annie, recently deceased. They were great neighbours. We were very proud when our only daughter Martina was born a year later.

I love Killeigh and where I live now in Lockclose it has a real community spirit and all the neighbours are wonderful. This was especially evident when my late husband Tom was left with paralysis from the waist down arising from a sudden onset back injury. Following months of rehabilitation in the National Rehabilitation Centre in Dublin (a phenomenal hospital), the community arranged for purchase of a mobility scooter for Tom. This was presented by the then owners of the pub, Matt and Kathleen Doyle. This was also the venue for my 60th birthday and late husband Tom’s 70th,. These are lovely memories to have. The pub is now owned by Carol and Willie Grennan. We are lucky to have this local amenity available to us.

My late husband Tom worked in Cappincur Joinery, Kilroys’s, High Street, and with local farmer John Kearney. He once relayed a story about ringing a bull and how he avoided being injured by climbing over a gate. He would have been well known from his time in Kilroy’s putting up television aerials. He always had a story to tell about any area he had visited. He was good at fixing lawnmowers, bicycles and chainsaws. When we moved to Killeigh Tom was involved in the labour of the building of the Macra hall and the Killeigh group water scheme. He also was actively involved with the cemetery committee prior to onset of his disability. We had a turf bank and before the time of turf cutting with machinery, I remember him cutting the turf with a slean and bringing it onto the bank with a barrow. All the neighbours would help each other with the drawing of the turf home especially the ones who had a tractor.

I recall with fond memories of the McCarney’s furniture sales that use to come to the Macra hall each month and as a family we loved to go through the bric-a-brac and furniture, you would go down the previous evening and “spot the good stuff” and then the following day in the hope of purchasing items which appealed. Everything was reasonably priced and many a bargain was secured.

Killeigh sports was an event we all looked forward to and drew in crowds from the locality. The wheel of fortune was very popular with everyone watched the spinning of the wheel in anticipation of your ticket being drawn and collecting a prize. In earlier times there would be dances held in the Macra hall afterwards, they were great times. There were also the GAA fundraising auctions which we supported. I loved to attend the matches in the local GAA field and the rivalry of Daingean and Killeigh, and remember the late Mick O’Rourke who did umpire at the matches in Killeigh. In the early days of telephones Mick and his wife Ann, who were neighbours at the time, were very generous in allowing us to use their phone to contact relatives.

The post office provided a valuable service where you could collect your pension and purchase your stamps. It was the centre of all social networking where you could catch on all the local going on’s in the village. Joseph and the late Brigid Plunkett did a wonderful job on running this and when it closed it marked a great loss to the local community. They were true ambassadors to Killeigh village.

In these times we have the local town link which connects between Portlaoise and Tullamore and facilitates transportation to and from the local town. The local shop (Gorman’s) has kept us all in supply of essential items during Covid and are to be commended for their hard work. I also have a local hairdresser, Clare Langton who calls to my house to do my hair. Sure where would you get it …!

We attended the senior citizen parties in Tullamore and would be wonderful if this could be held locally. A local community hall would be a wonderful resource to the area of Killeigh and would enable social networking among the community. I commend the work of the local committee and look forward with the community of Killeigh to the renovation of the hall and participating in social gatherings in the future. I wish the committee all the best with their latest fundraiser which is a raffle with a prize of a new three-bedroom house in Enfield valued at €355,000.

Please visit winahouseinenfield.com to purchase your ticket with a chance to win a brand new A rated, 3 bedroom house in Enfield, Co. Meath