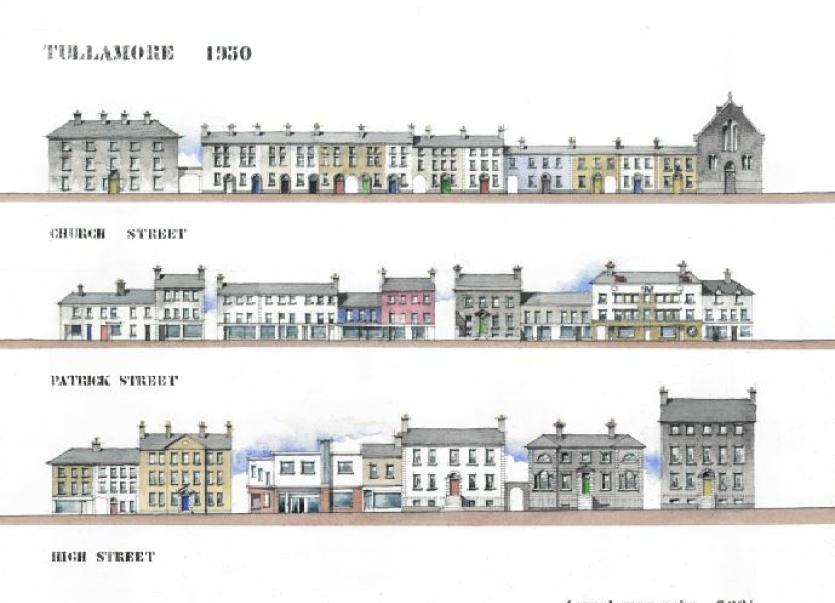 Tullamore has always taken pride in its architectural heritage.

Recently we have seen the well executed restoration for residential purposes of historic buildings on High Street and Store Street by enthusiastic householders. The soon to be opened conversion of the former Kilroys shop on High Street as an Arts and Performance Centre, will hopefully act as a catalyst for similar projects and a restored Acres Folly will add to the amenity of the Lloyd Town Park.

Most of the really important buildings of the town are still happily intact but many are now over 200 years old and their future hangs in the balance. Recent controversies around the removal of protected structures and the proposed designation of others suggest that with a new Town Plan imminent, a discussion on the value of the architectural heritage of Tullamore is timely.

The conservation and preservation of important buildings can:

-Utilise the space, accommodation and sites offered by well located central properties to the best advantage

-Give good example to future builders

Inclusion on the Record of Protected Structures (RPS) has its societal benefits but it comes with costs.Three years ago, a proposal for a large hotel, conference centre and casino on Water Lane came to grief because of its relationship with a protected structure. Rear extensions to modest listed houses have been rejected also.

The reuse of older buildings, particularly those in town centres, is always problematic. Fire and building regulations may make the costs of converting upper floors unviable. Insurance issues can arise for residential access through shops. Inclusion on the RPS adds further complications. As there are no financial penalties for leaving premises idle, the result can be a lack of investment and a self reinforcing spiral of town centre vacancy and decay.

To support the Government’s policy of ‘Town Centres First’ I believe that rather than list a lot of individual structures, a more targeted approach along the following lines might work better:

The exterior and interior of buildings of real architectural importance or historical significance ( The Courthouse, Market House, Old County Hospital, Goodbody Warehouse, War Memorials, former Charleville Estate Office, the churches, banks etc.…..) should be conserved in their entirety and generous grants made available for their refurbishment and reuse and the improvement of their settings. The present listing of two hundred and seven buildings and structures in Tullamore for total preservation should be rigorously reviewed.

The appearance of important streetscapes (Cormac, Church, O’Moore Streets and O’Connor Square for example) should be maintained and improved by designation as Areas of Architectural Conservation (ACA).

ACAs seek to conserve the historic character of a street; though the individual buildings may not be listed. This gives greater flexibility as there is no need for planning permission for internal alterations or reasonable extensions. Designation would channel investments into street improvements.

Promised in the 2010 Town Plan, no ACAs were delivered and their introduction in Tullamore is now overdue. An illustration of three of the principal streets as they were in 1950 shows how appropriate candidates might be selected.

Bookended by the 1785 County Infirmary and the Methodist Chapel, the southern side of Church Street is an impressive and coherent streetscape.with its two and three storey terraced houses and their notable dressed stone door cases. This makes it very appropriate for designation as an ACA.

As a busy commercial street of varying styles and heights, Patrick Street would not be a suitable candidate. There is however a case to be made for the longer term redevelopment of its northern side within the context of a comprehensive civic design plan.

Though containing several important listed buildings, its overall architectural character has been compromised over the years by demolition, extensions and new shopfronts.High Street therefore, would not appear to be a suitable candidate

Finally, ordinary domestic buildings such as those on Emmett Terrace, Chapel St, Convent Road, Store Street or Convent View should be taken off the RPS but identified as being of local interest. There is little need for listing anyway, as it is evident that their owners take great pride in them. The Council could offer a free advisory architectural design service to those who want to refurbish or carry out minor extensions.

Tullamore has always been a vibrant commercial town and cannot be frozen in time. A coherent conservation policy can clarify the role which its intact 18th and 19th c. architectural heritage will play in its future. A study to consider and deliver this should be an integral part of the new plan for the town centre.