What's new on Netflix this April?

A new month means a new batch of releases from Netflix, take a look at the movies and TV shows coming to your screens this month... 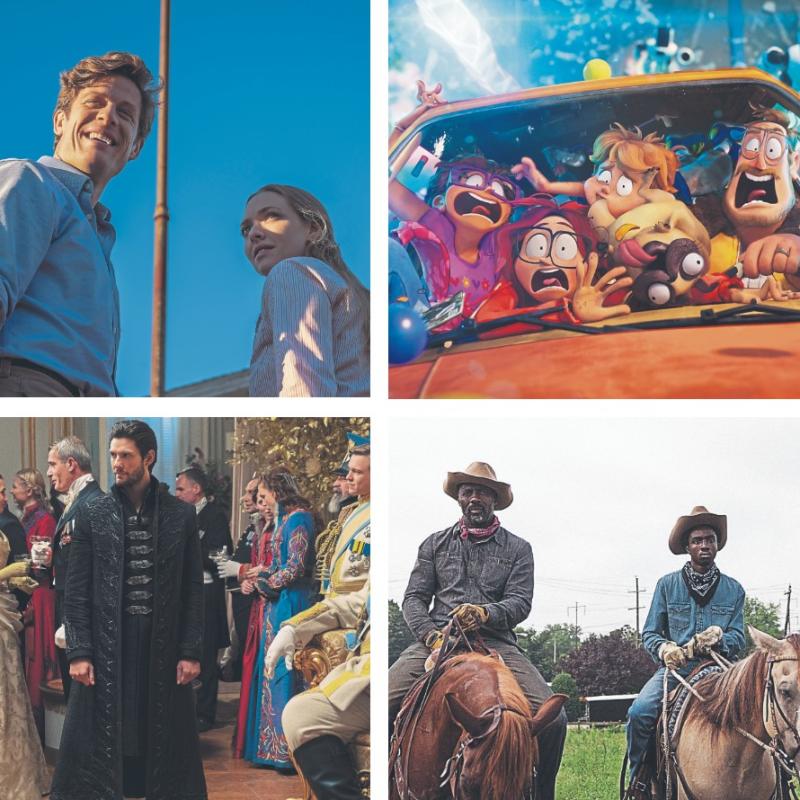 Prank Encounters
Hosted by Gaten Matarazzo (Stranger Things), each episode of this terrifying and hilarious prank show takes two complete strangers on the surprise ride of a lifetime. It's business as usual until their paths collide and their one-day assignments turn into supernatural surprises. Where fear meets funny, Prank Encounters is the most elaborate hidden camera prank show ever devised.

Dolly Parton: A MusiCares Tribute
In a star-studded evening of music and memories, a community of iconic performers honor Dolly Parton as the MusiCares Person of the Year.

This Is a Robbery: The World's Biggest Art Heist
It was the biggest art heist in history: Over St. Patrick’s Day weekend in 1990, legendary works by Rembrandt, Vermeer and others worth over half a billion dollars today were stolen from the Isabella Stewart Gardner Museum in Boston. This four-part documentary series from director Colin Barnicle covers the leads, dead ends, lucky breaks and speculations that characterized the investigation of this still unsolved mystery.

Thunder Force
In a world where supervillains are commonplace, two estranged childhood best friends reunite after one devises a treatment that gives them powers to protect their city.
Starring:Melissa McCarthy,Octavia Spencer,Jason Bateman

Concrete Cowboy
In the new Netflix film Concrete Cowboy, based on Greg Neri’s book Ghetto Cowboy, Idris Elba plays Harp, a man who finds solace in rehabilitating horses for inner city cowboys at the Fletcher Street Stables in North Philadelphia. When he is reunited with his estranged 15-year-old son Cole (Caleb McLaughlin), they both learn valuable lessons from each other and the surrounding community. Ahead of the film’s premiere, Elba talks about what drew him to the project, how he learned to emulate the real life urban cowboys of Philadelphia, and, yup, learning to ride a horse.

Two Distant Strangers
An Oscar-nominated short film written by Emmy winner Travon Free, who directs with Martin Desmond Roe. Joey Bada$$ stars as a man trying to go home to his dog who gets stuck in a time loop that forces him to relive a deadly run-in with a cop.

Why Did You Kill Me?
The latest crime documentary from Netflix sees the line between justice and revenge blurs when a devastated family uses social media to track down the people who killed 24-year-old Crystal Theobald.

Shadow and Bone
Based on Leigh Bardugo's worldwide bestselling Grishaverse novels, Shadow and Bone finds us in a war-torn world where lowly soldier and orphan Alina Starkov has just unleashed an extraordinary power that could be the key to setting her country free. With the monstrous threat of the Shadow Fold looming, Alina is torn from everything she knows to train as part of an elite army of magical soldiers known as Grisha. But as she struggles to hone her power, she finds that allies and enemies can be one and the same and that nothing in this lavish world is what it seems. There are dangerous forces at play, including a crew of charismatic criminals, and it will take more than magic to survive. Shadow and Bone is a Netflix production from 21 Laps Entertainment, starring Jessie Mei Li (Alina Starkov), Archie Renaux (Malyen Oretsev), Freddy Carter (Kaz Brekker), Amita Suman (Inej), Kit Young (Jesper Fahey), and Ben Barnes (General Kirigan).

Things Heard & Seen
Starring Amanda Seyfried and James Norton, this American horror thriller film was written and directed by Shari Springer Berman and Robert Pulcini. It's based on the novel All Things Cease to Appear by Elizabeth Brundage.
An artist and her husband who move from Manhattan to to a historic hamlet in the Hudson Valley, come to discover that their marriage has a sinister darkness, one that rivals their new home’s history.

The Mitchells vs. The Machines
From the humans who brought you the Academy Award-winning Spider-Man: Into the Spider-Verse and The LEGO Movie comes The Mitchells vs. The Machines, an animated action-comedy about an ordinary family who find themselves in the middle of their biggest family challenge yet…saving the world from the robot apocalypse. No big deal, right? It all starts when creative outsider Katie Mitchell is accepted into the film school of her dreams and is eager to leave home and find “her people,” when her nature-loving dad insists on having the whole family drive her to school and bond during one last totally-not-awkward-or-forced road trip. But just when the trip can’t get any worse, the family suddenly finds itself in the middle of the robot uprising! Everything from smart phones, to roombas, to evil Furbys are employed to capture every human on the planet. Now it’s up to the Mitchells, including upbeat mom Linda, quirky little brother Aaron, their squishy pug, Monchi, and two friendly, but simple-minded robots to save humanity. Directed by Michael Rianda (Gravity Falls), produced by Oscar winners Phil Lord and Chris Miller, and Kurt Albrecht, and featuring the voices of Abbi Jacobson, Danny McBride, Maya Rudolph, Beck Bennett, Fred Armisen, Eric Andre, and Oscar winner Olivia Colman, The Mitchells vs. The Machines is about embracing the things that make us unique, learning what it means to be human in a world increasingly filled with technology, and holding tight to the people most important to you when the unexpected hits.