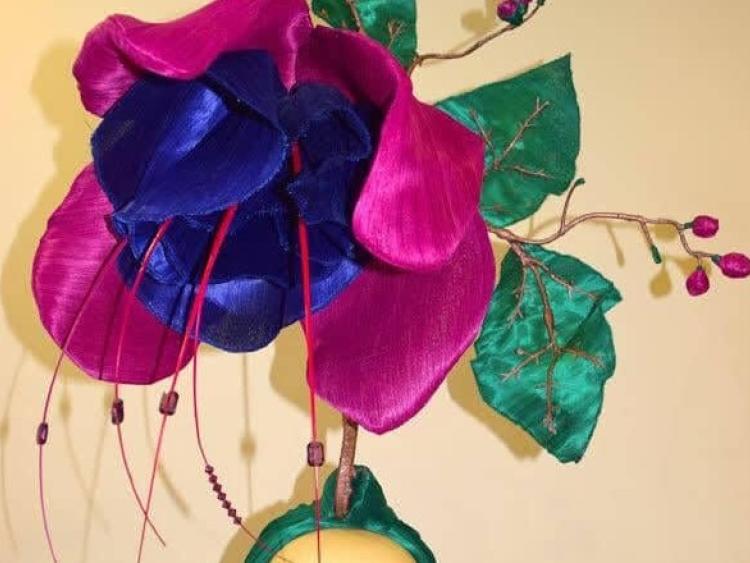 More accustomed to designing intricate, often spectacular, and always unique headwear to be worn by her clients, it’s nonetheless a definite case of ‘hats off’ to Denise Casey this week, as the Offaly milliner celebrated the inclusion of her Deora De piece in the famous London Hat Week.

From a competition which was open to entries from all around the world, Denise was among those specially selected to display an example of her work at this year’s event, which ran from  April 3 to 12.

With milliners from thirty countries involved, including China, Argentina, South Korea, Australia, and the United States, Denise was delighted to have the opportunity to represent Ireland. And indeed, her presence this year was quite the turnaround from just twelve months ago, as she explained.

“Last year I went to London Hat Week as a regular visitor, just like everybody else, to enjoy the marvellous pieces on display and to take part in some workshops while I was there, too. So for me to actually have one of my own designs chosen for display this year, it’s a little unreal."

The design Denise refers to, ‘Deora De’, which is the Irish for the Fuschia flower, was created especially for London Hat Week and took about six weeks to make.

Denise, who first entered the world of millenary only in 2015, used a silk abaca material for her design, while also integrating Swarovski crystals into elements of the piece. She decided on the idea for her piece after learning that this year’s theme was going to be world gardens.

“I entered the competition back in October and got word that I had been one of those who was successful in December. Once I knew for sure what this year’s theme was, the idea of doing something based on the fuschia flower came to me very quickly. It’s a flower that we’d see a lot of, and it’s one that I think has an undeniable sense of beauty to it.”

Denise, who cites Steven Jones and Ireland’s own Philip Tracey as among the milliners whose work she most admires, would love to have one of her pieces worn by Kate Middleton one day.

“Absolutely! I’m a big fan of Kate’s looks. I think, even this early in her life as a member of the Royal Family, she’s already developed a reputation as someone who cares very much about what she wears, and pays great attention to detail on that side of things. She’s well on her way to becoming a style icon, and if I could help her along the way, I’d be happy to."

"I was delighted to have Jennifer Byrne, the Rose of Tralee a couple of years back, wear some of my pieces, and another of my pieces won the Best Hat prize at the Tullamore Show last year, worn by Ramila Trevicka. So yeah, to add Kate Middleton to that list, I'd be grand with that now, to be honest! I think to work with Kate - and something like to be part of New York Fashion Week - they’re both riding high on my bucket list!”