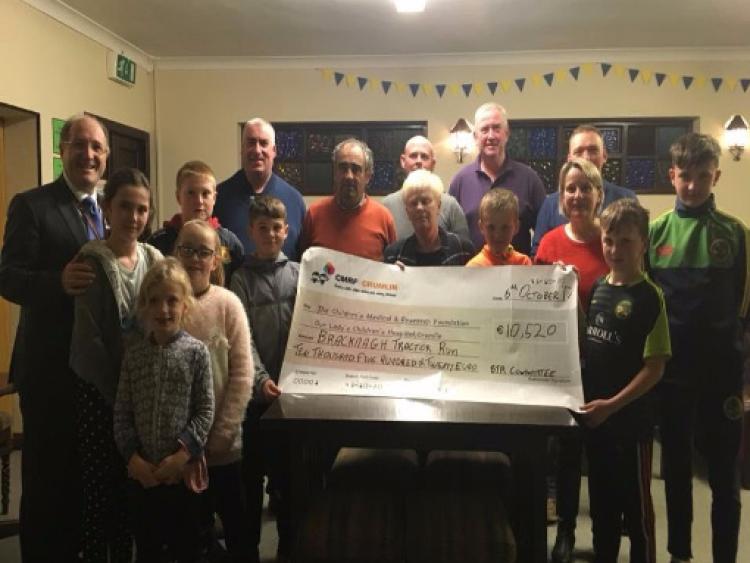 On Sunday, October 1, 142 vehicles converged on Bracknagh for the 5th Tractor Run in the village since the inaugural run in 2013.

The run was a resounding success, and the committee of Dennis Meredith, Pat Carey, James Wallace, Margaret Kelly
Eugene O Neill, John Ging & Douglas Ward would like to thank everyone who contributed to the success of the event, including individuals who filled sponsorship cards, the chefs and servers who kept everyone fed, musicians who kept everyone entertained, traffic marshals, all who brought vehicles, and businesses who made donations or sponsored prizes.

They also paid a very special thank you to Mrs. Murphy, Seamus and Martina for keeping everyone refreshed and allowing the committee to use the venue again.

The money has been counted with €10,520 being handed over to Crumlin's Children's Hospital having been raised by the small Offaly community.

The cheque was handed over on Friday last to Mr. Gerry Daly of CMRF. He explained how funds raised are used to help alleviate the distress and discomfort for patients and their parents in Crumlin.

He told the group that unfortunately fundraising is becoming more vital to maintain services, as budgets are limited and stretched.

Mr Daly commended the community of Bracknagh for raising such a significant amount.