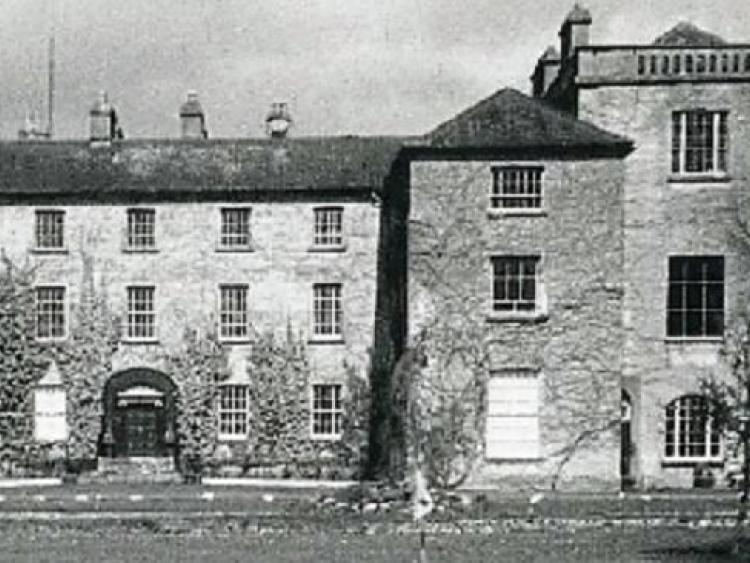 RECENT research into the origins of association football in Ireland has demonstrated that Offaly was – for a brief period – a centre of early soccer activity, involving one of the first soccer teams in Ireland.

The traditional understanding is that soccer was consciously ‘introduced’ to Belfast in 1878, from where the game eventually spread around the rest of the island. The real story, however, is not quite so straightforward. We now know that soccer was played in other parts of Ireland before 1878 and Offaly, Tipperary and Sligo were centres where the code was played in the late 1870s and early 1880s, though it failed to take root and was not sustained.

As early as December 1877, three football matches were played in the Tullamore area, which were almost certainly either played under association rules or rules that were a compromise with soccer. The first was a 12-a-side match played at St Stanislaus’ College, Tullabeg, on Saturday, December 8, when a team from the college defeated a team from Tullamore 5-0. The second was played 11-a-side on Friday, December 14 when the Tullamore team visited Geashill and defeated the villagers 4–2. The third match, on Thursday, December 27, reportedly played in front of more than 700 spectators at Tullamore, was a scoreless draw between a ‘Tullamore XV’ and a ‘Mr Thomasson’s XV’ that was drawn at least in part from the Geashill team.

The rules used in the first match were ‘those of the College’, but described as ‘a modification of those called “Association”’. St Stanislaus’ own version of football was called ‘gravel football’ and was also played at its sister Jesuit colleges at Clongowes Wood. Gravel football appears to have been not dissimilar to association football. It featured dribbling, and while the ball could be punched, it was not allowed to be caught, picked up or carried. Goals were scored when the ball passed between two upright posts, and there was no offside rule. From the description of play and the involvement of Orlando Coote (more about him later) as captain of the Tullamore team, it is probable that compromise rules with soccer would have been agreed. The report of the second match describes a goal being disallowed for offside, indicating association rules.

While these were the only matches that the College played (despite advertising in the Dublin and Belfast press for opponents), Tullamore also played against other teams. By September 1879, the team had constituted itself as a formal ‘dual code’ football club, when a meeting decided that the club should alternate between playing association and rugby rules. This meeting was on September 22, only a few days since Cliftonville – traditionally understood to be Ireland’s first soccer club – had been formed. The press report does not describe the meeting as an inaugural one, so it is possible that the club had been in existence for some time, which would make Tullamore Ireland’s first club. But there is no positive evidence to support this.

The rugby side of the club did not appear to take off. Only two rugby matches are recorded in the press: both against Ranelagh School, Athlone, in February and March 1879. But the association team continued to play, with a 2–0 win recorded against the Banagher Royal School in March 1881, as well as the St Stanislaus’ games.

Another match recorded in Offaly during this initial period of activity was in Banagher in April 1881 between two teams from the Royal School when a ‘Banagher XI’ beat a ‘Lusmagh XI’ 2–1.

There is no record of any matches in Offaly during the 1882–83 season, but the following season the Tullamore club played at least one soccer match, travelling to Dublin in December where it lost by four goals to the newly formed Dublin Association Football Club at Donnybrook.

Tullamore played three soccer games in 1884–85 against Cloghan, Castlerea and a return fixture at home to Dublin Association. After that, however, there is no further record until a football match at the club grounds at Spollinstown against Timolin in January 1887 was said to have drawn an ‘enormous concourse of spectators’, but it’s not clear if this was association rules. In April 1888 they played Belmount, but again under which rules is unknown.

A Parsonstown Football Club was formed in Birr for the 1883–84 season, which played rugby and association rules (mainly rugby) for three seasons, but in November 1886 the club folded. There were also soccer teams in Banagher and Cloghan in 1883–84 and 1884–85, and teams from Cooldarragh and Drumcullen played soccer in 1884–85. From 1885, Gaelic football rules were introduced to the county: Timolin, Eglish, Killyon and Coolderry played under these new rules in March and April 1885. From this time, there are reports of various football matches played by teams in the county from which the particular code is not clear. It seems likely that some were Gaelic football matches, but there are also references to tries being scored and a match played by Coolderry in 1886 was recorded as rugby. In January 1886, a meeting in Banagher debated which football rules to adopt, and a majority chose the GAA rules.

From 1887, the GAA appears to have become more assertive. In July of that year, there were rival athletics meetings in the county: under GAA rules at Birr and under Irish AAA rules organised by the Tullamore Athletic Club, under whose auspices the football teams played. A letter in the Midland Tribune condemned the club for holding an athletics meeting under the rules of the ‘West British Faction’. In April 1888 there is a report of a violent attack on the Tullamore club grounds by ‘a motley gathering of roughs’ ‘armed with hurleys’. By the following month, a Gaelic athletic club had been established in the town. In September, the Tullamore sports, promoted by James Stirling (the Tullamore club secretary), featured an exhibition by the ‘hurlers and athletes who are being formed for the Gaelic Invasion of America’; indicating a switch in allegiance.

What caused this period of soccer activity in Offaly, who was involved, and why did it not last?

It is likely that the driving force behind Tullamore soccer was Orlando Coote, the son of an Anglican clergyman and the grandson of Sir Charles Coote of Ballyfin, Laois. He was born and brought up in England, where he studied at Oxford. At university, he was involved in athletics, and on return home to Kent he captained the local Tunbridge Wells soccer club. From at least May 1877, he was in Ireland, where he worked as a land agent, and took part in cycling and athletics events, representing the Geashill Athletic Club.

Given his football experience in Kent, Coote was surely the instigator of the Tullamore football matches in December 1877, in which he captained Tullamore in the first match and Geashill in the second. He was chosen as club captain for the Tullamore association team in September 1879 and played for Tullamore in the 1880–81 season. At some point around this time he moved to Roscommon, where he founded a football club at Castlerea (which he brought to play against Tullamore in May 1885). Thereafter he moved to Athlone, where he established the Athlone Association Football Club in 1887.

It is more difficult to identify the social background of the other footballers, but it appears that the Tullamore team was mostly commercial and professional men.

One player, Richard Moynan, was described in a match report as ‘a Wesleyan commercial man’. At least two players called Goodbody played for the club, who may have belonged to the local Quaker family that owned a number of businesses in the county, including a tobacco factory and jute works.

One player who can be positively identified is James Stirling, who played in at least eight Tullamore matches in this period, three as captain, and was the club secretary. Stirling had a number of business interests in the town and was involved in the Land League: an intriguing counterpoint to Coote the land agent. Stirling also went on to become a founding director of the Irish Press, along with Edmund Williams of D.E. Williams, Tullamore.

Given the cost of club membership and the need for time off work (most matches were played on Thursday afternoons), it seems likely that the others were similarly middle-class. In terms of religion, the membership appears to have been mixed, with Catholics being the majority, though Protestants were probably over-represented in relation to their overall numbers in the vicinity. The school teams would have been middle-class and Catholic.

St Stanislaus’ College was an elite Jesuit school, attended by about 200 boys, and at this time ‘arguably the top-performing school in Ireland’. As well as providing a secondary education, it prepared boys for entry examinations to the University of London, the Indian Civil Service, the Royal Military Academy and the professions. It had ‘wonderful playing fields’ and emphasised the playing of games: ‘football and gymnastics of every kind are encouraged at the College.’ In 1886, the College, which was in financial difficulties, closed, with the boys all transferring to Clongowes.

The Banagher Royal School, was a small fee-paying school (it was reported in 1879 as only having 14 pupils) that was nominally non-denominational, but had recently come under Roman Catholic management and was attended exclusively by Catholic boys. The school team, unsurprisingly given its size, included staff as well as boys: the headmaster Mr Joyce played in the match against Tullamore.

The failure of soccer to establish itself in Offaly at this time can be explained by comparing the economic and social conditions in the county with those in that part of Ireland where the sport did become established, namely Ulster. A largely rural county like Offaly lacked any significant industrial sector, in which workers were, under the factory acts, entitled to a Saturday half-holiday. Moreover, wages in the county were not comparable to those available to, in particular, skilled workers in Ulster. Belfast, then, had a critical mass of young men with spare time and resources to play sport; and its size and population density facilitated the formation of multiple teams that could be sustained by guaranteeing opposition, competition and rivalry.

In Offaly, only the relatively few professional and commercial men had the time and money to play organised sport on a Saturday or during the week. While Sunday was available for agricultural and retail workers, the organisers of soccer were unwilling to utilise the Sabbath for leisure. In contrast, the GAA’s willingness to embrace Sunday play allowed Gaelic football, after its introduction in 1885, to succeed where soccer had ultimately failed.

The writer of this article, Martin Moore, is a Belfast-based historian and independent researcher. His article ‘Early Association Football in Ireland: Embryonic Diffusion Outside Ulster, 1877–1882’ is published in the Sport in History journal https://doi.org/10.1080/17460263.2021.1873830