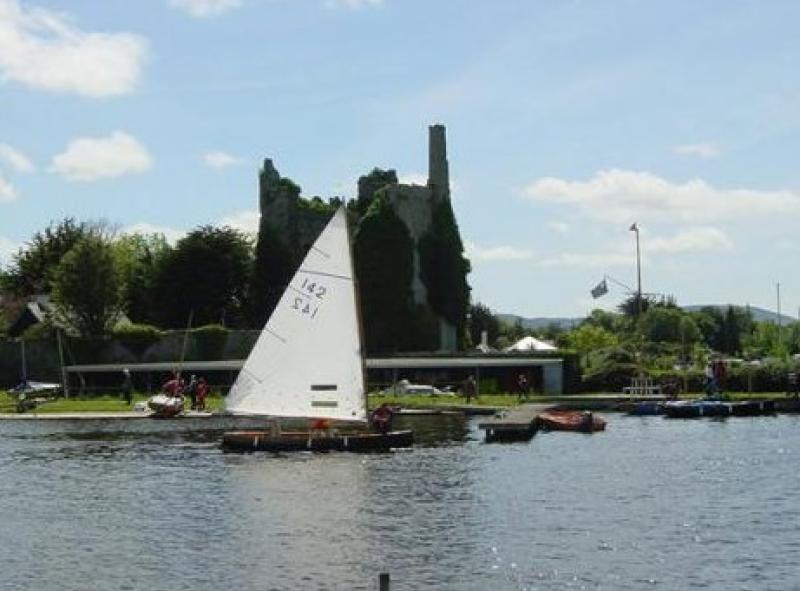 A dinghy sailing in front of the ruined castle in Dromineer harbour.

The village of Dromineer, one of the popular beauty spots on the shores of Lough Derg, is to get an extra twenty boat berths for pleasure cruisers.

Marcus O'Connor, Director of Services, told a recent meeting of Nenagh Municipal District that Waterways Ireland is going to install the extra berths in the village's harbour.

“This is excellent news for Dromineer,” he commented. “Having this extra berthing capacity, which will bring the total number of berths to forty, will allow more visitors to stay in the village.”

Cllr Hughie McGrath pointed out that in 2021 boat touring on the Shannon was more popular than ever. “This in turn created a greater demand for boat berths, with people not being able to stay in places like Dromineer because there were no berths available. I've been told that in Banagher Marina all the berths are fully booked for a long way ahead and there's a waiting list of those who want to moor their boats there. The Shannon's boating traffic is thriving but this is a problem caused by that success. I am very glad to hear there will be 20 more berths in Dromineer. I've been told that other spots on the lake and along the river as a whole are also increasing their berthing capacity.”

Cllr Ger Darcy commented that he likes the tourism marketing concept “Ireland's Hidden Heartlands” and he hopes it prospers. “I think it will prosper because the Shannon is the heart and soul of the marketing concept, and the river has seen a big increase in pleasure craft traffic during the last year. However, mooring spaces are scarce and the problem needs to be tackled.”

Cllr John Carroll pointed out that there's been a lot of positive work carried out in villages and towns in the Lough Derg region, and along the lakeshore. He said Dromineer is an attractive village which has “massive potential. However dereliction in the village is impacting hugely on its image and on its potential development. We need to work with the community to try and solve this dereliction issue. I am sure some visitors don't come back to the village because of the unsightliness of the derelict area. A lot of people have a big soft spot in their hearts for Dromineer and they want to see this visual problem being dealt with.”

Cllrs Joe Hannigan and Rocky McGrath commented that they were delighted to hear the news. “Dromineer is such a beautiful spot,” said Cllr McGrath, “and this will be a big boost.”

Cllr Michael O'Meara praised the Council Executive and Marcus O'Connor for working with Waterways Ireland and producing this positive result. “I know,” he said, “that it's not always easy when you are dealing with bodies like Waterways, but the Council has managed to produce a very good result here.”

Cllr O'Meara added that something needs to be done with a number of abandoned boats on Lough Derg. “If you had an abandoned car on the side of the road it would be moved quickly,” he remarked, “but abandoned boats are allowed to remain in their spots for months if not years. I think the Council should introduce a bye law to deal with this problem.”

Marcus O'Connor told the meeting that a planning application for the twenty new berths will be made later on this year. “These will be Waterways Ireland berths,” he remarked, “which will be policed and looked after by Waterways Ireland. They will have a five day turnaround time. The extra berths will prove very beneficial for the café and the public house in the village, as well as Aqua Splash There will be a significant upgrade of the toilets and showering facility. As you have said, there's an obvious derelict site in the village, something which we are very aware of. There is no doubt but it does detract from the visual impact of the village. Our planning department has been in a number of discussions with the owner with the aim of reaching a solution.”

He said the Council developed the playground on the lakeshore's promenade and it plans to develop a campervan site as well.

Mr O'Connor added that there have been issues in Garrykennedy and Terryglass with abandoned boats, “but those boats were in Council berths not Waterways Ireland berths. Waterways Ireland has a very active policing policy when it comes to abandoned boats.” He promised to come back to the councillors with a bye law proposal which would tackle the problem.