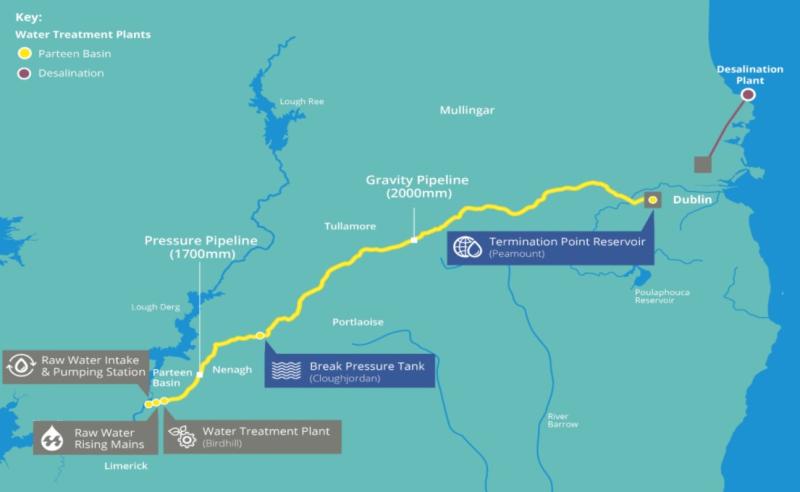 THE Shannon to Dublin pipe project, part of which will run through Offaly, has entered another public consultation phase.

This 13 week consultation period began on Tuesday, December 14 last and will finish on March 14 next.

People can view Irish Water's plan for the pipe project on www.water.ie and at Local Authority Planning Counters.

Irish Water says it will hold Webinars in January and February, details of which will be provided on www.water.ie

Irish Water says all the public's submissions will be reviewed and responded to as part of a post consultation report. The plan will be adopted in 2022.

Following this, a further round of public consultation on the pipe project will take place during 2022.

Irish Water points out that, "The timeline to submit a Planning Application to An Bord Pleanála is subject to the enactment of new Abstraction Legislation."

Irish Water estimates that 40% more treated water by 2044 will be needed in the Greater Dublin Area and Midlands in order to "address current shortfalls with our supplies and to provide a sustainable and resilient water supply which can support housing and commercial growth".

It points out that The Water Supply Project Eastern and Midlands Region (“WSP-EMR”), is an essential project to meet the long-term water supply requirements to 2050 and beyond in a sustainable manner. The project comprises of an abstraction of water from the lower River Shannon at Parteen Basin near the southern tip of Lough Derg, with a new water treatment plant nearby at Birdhill.

Treated water will then be piped 170km to a termination point reservoir at Peamount in County Dublin, connecting into the Greater Dublin Area. The project will also facilitate options to reinforce supplies of treated water to communities from Tipperary to Louth including Newport, Borrisokane, Cloughjordan, Mullingar, Carlow, Portlaoise, Navan and Drogheda.

Cllr Seamus Morris in Nenagh told the Midland Tribune that he remains resolutely opposed to the project.

The matter is of considerable interest and concern to local councillors in both Tipperary and Offaly.

During a recent meeting of Birr Municipal District Cllrs John Clendennen and Peter Ormond said they wanted to meet with a representative of Irish Water and discuss the project in greater detail. They complained of a "lack of clarity" about the matter. They were told by Director of Services Stephane Duclot that it is planned to invite Irish Water to a full meeting of Offaly County Council to discuss the matter.

While many councillors say they are opposed to the pipe, Cllr Morris says he's aware that their views could of course change.

"In their own mind," he remarked, "Irish Water and, to be honest, most politicians of the state, think this project is a done deal (because it has been given statutory status in the National Development Plan)."

The councillor said he was calling on all councillors in both Tipperary and Offaly to make their true positions known, 'to either lie down and do nothing or get ready to take on Irish Water in 2022'.

"I think it behoves every right-thinking councillor in the region to oppose this because I firmly believe this project is environmental vandalism and has the potential to permanently destroy Lough Derg and the river Shannon unnecessarily."