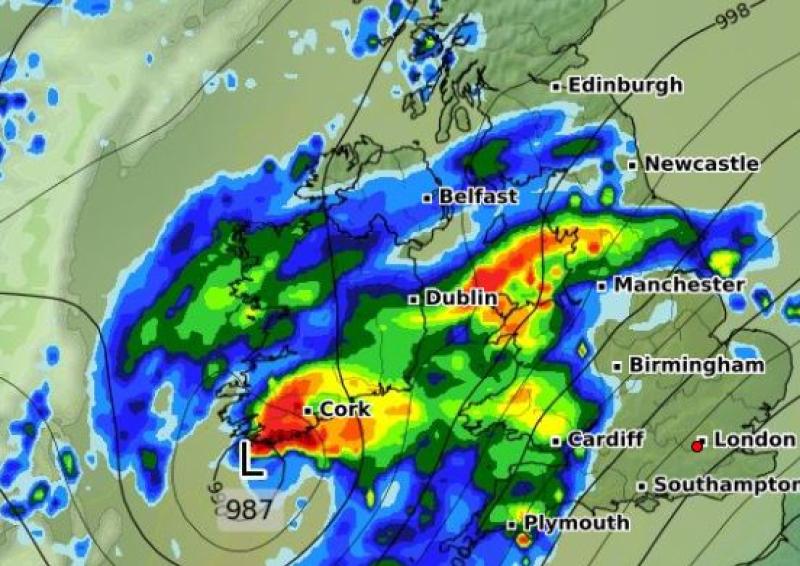 Ireland is set to be hit with more wet weather on Sunday according to the latest Met Eireann weather forecast for Ireland.

Met Eireann has issued a Status Yellow Rainfall Warning for seven counties with the south east set to see the worst of the rain.

According to Met Eireann, Sunday will start wet in many parts, with the risk of spot flooding in the south and southeast where the rain may be thundery. The rain will ease off through the afternoon as brighter spells and showers follow into the west and southwest. However, cloud and outbreaks of rain will linger in parts of the north and east, and some sleet may fall over higher parts of Ulster in the evening. Highs of 5 to 9 degrees, cooler at times in the afternoon, as light to moderate variable winds become northwesterly and increase moderate and gusty.

According to Met Eireann, any residual rain will gradually clear eastwards leaving a night of clear spells and scattered showers. The showers will mainly be mostly confined to northern and Atlantic coasts, with some turning wintry especially over higher ground. Lowest temperatures of 0 to 4 degrees, with some frost and icy patches possible. Westerly winds veer north to northwest and increase moderate to fresh by morning.

According to the latest Met Eireann weather forecast, a good deal of dry weather is expected on Monday along with good sunny spells. Scattered showers will still occur, mainly in the north and northwest but they will ease through the afternoon. Chilly with highest temperatures of just 5 to 9 degrees, coolest in Ulster, with an added wind chill factor in moderate to fresh northwest winds, but the winds will ease light to moderate as they back southwesterly by evening.