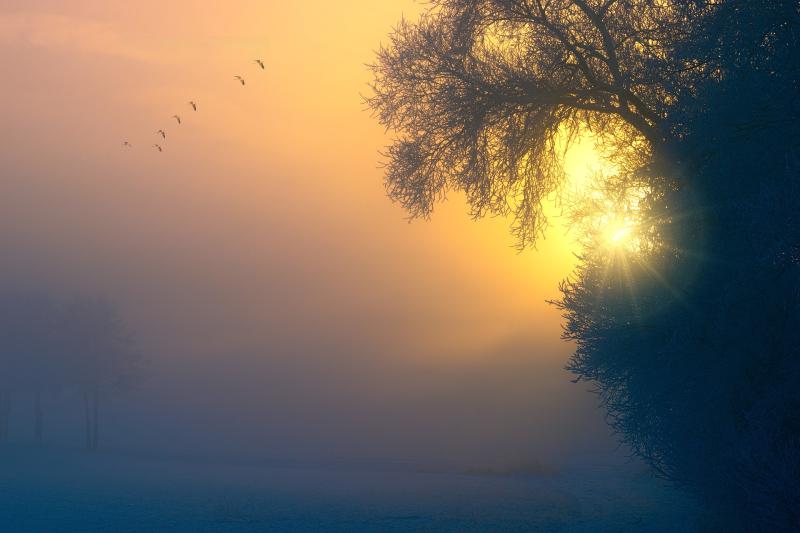 The weather forecast for Ireland from Met Eireann for the coming days is for the weather to continue settled and largely dry as high pressure dominates our weather. However Met Eireann says that rost and fog is expected to form by night, with fog persistent in places during the day.

According to the latest Met Eireann weather forecast for Ireland fog and low cloud may persist in parts of the south and southeast through much of Thursday. A Status Yellow Fog Warning is in place for Ireland up to midday on Thursday. Elsewhere it will be a mainly dry day with a mix of cloud and sunny spells, and with some patchy drizzle possible in the west and northwest. Highest temperatures of 5 to 10 degrees, or even a little cooler where fog persists in light southerly or variable breezes.

Mist and fog will develop again on Thursday night, becoming dense in some parts in the near calm conditions. While most places will be dry, a few patches of drizzle are possible in Atlantic coastal counties. Lowest temperatures of -2 to +3 degrees  with some frost forming.

The Met Eireann weather forecast for Ireland for Friday says that areas of mist and fog will be slow to clear once again through Friday morning, and could linger for much of the day in some eastern and northern parts of the country. Otherwise it will be another largely dry day with a mix of cloud and sunny breaks, and just the odd, mainly coastal, drizzle patch. Highest temperatures will range 5 to 9 degrees Celsius generally but again, a few degrees colder where mist and fog persists, in light southeasterly or variable breezes.

Mist and fog will become more widespread again on Friday night, becoming dense in places. Continuing dry for most with just the odd spot of drizzle, and some light rain at times in coastal areas. Lowest temperatures of 0 to 4 degrees.

According to Met Eireann, fog will clear quicker on Saturday than on previous mornings leaving another mostly dry day for most, albeit cloudier with patchy light rain and drizzle in places. Highest temperatures of 5 to 10 degrees in light southerly breezes. Most places will start dry on Saturday night with variable cloud and some clear spells. Cloud will thicken from the west, however, with outbreaks of light rain and drizzle spreading eastwards across the country overnight. Lowest temperatures of 0 to 5 degrees with mist and fog patches developing.

Any residual overnight rain in the east and southeast will clear away on Sunday morning with brighter, clearer conditions and sunny spells spreading from the west. A few spots of drizzle will still occur during cloudier periods and there is a chance of more widespread patchy light rain and drizzle developing over the southern half of the country on Sunday afternoon. Highest temperatures of 7 to 10 degrees.