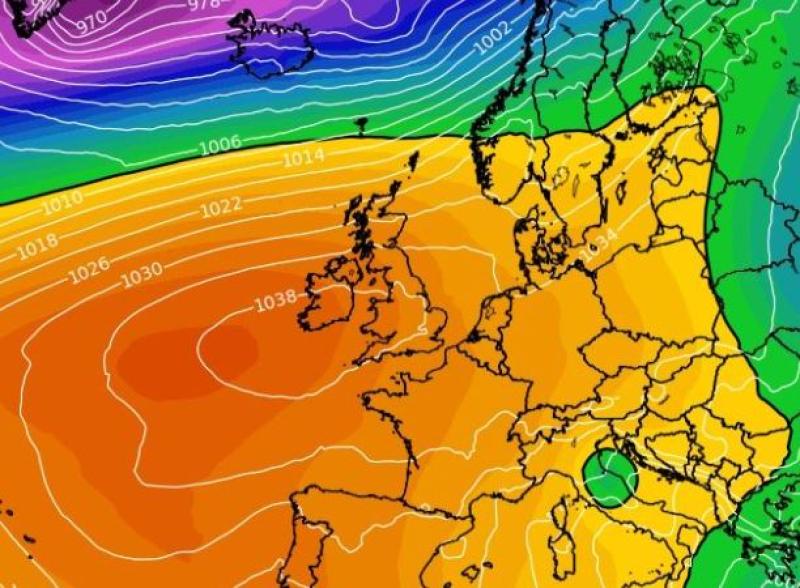 High pressure is set to dominate the weather for Ireland this week with Met Eireann forecasting a big change in the weather compared to the wintry conditions of last week.

According to Met Eireann, it will become gradually more settled this week as a ridge of high pressure influences Ireland's weather as we move towards midweek.

According to the latest Met Eireann weather forecast, any lingering patchy rain will largely clear early on Monday night as fresh and clear conditions extend from the west. However, some mist and fog will form as winds ease light. Temperatures will dip down to between -1 and +3 degrees overnight, leading to a touch of frost over the northern half of the country. Staying a little milder and cloudier in southern areas with patchy drizzle.

According to the latest Met Eireann weather forecast for Ireland, it will be a largely bright and sunny day on Tuesday, with long spells of sunshine. Cloudier conditions with spots of drizzle along the south coast at first tomorrow will clear later in the morning. There may be isolated showers on northwestern fringes later. Southwest winds will generally stay light too, with highest temperatures of around 6 to 9 degrees.

A dry night on Tuesday night with long clear spells and light winds too. This will allow temperatures to drop to -1 to 3 degrees so there will be a touch of frost mainly in the south. Some mist and fog patches also.

According to Met Eireann, Wednesday will be another dry and bright day with long clear spells and plenty of afternoon sunshine. There will be the odd shower or two along Atlantic coastal fringes where it will be a little cloudier too. Highs of 7 to 10 degrees and light winds.

Staying clear and dry for most on Wednesday evening with light winds. Temperatures will drop to around 1 to 4 degrees with patches of mist or fog forming for southern areas overnight.

According to the latest Met Eireann weather forecast for Ireland for Thursday, some of that mist or fog will be slow to clear in the morning. It will become a little cloudier in the afternoon as winds become more southerly. There will be an isolated shower or two for coastal areas with highs of around 6 to 9 degrees.

A cloudy night on Thursday night with a few showers lingering in the predominantly southerly flow. The extra cloud cover will make it a little milder than previous nights with lows of around 4 to 8 degrees. Some mist and fog patches also.

Friday will be a more settled day with some scattered cloud and a few showers. Highs of around 6 to 9 degrees and light winds.

According to Met Eireann, generally settled weather is on the way for Saturday and Sunday with just the odd shower about the coasts.