Hospice Campervan heading for “The Green Fields ‘round Ferbane” 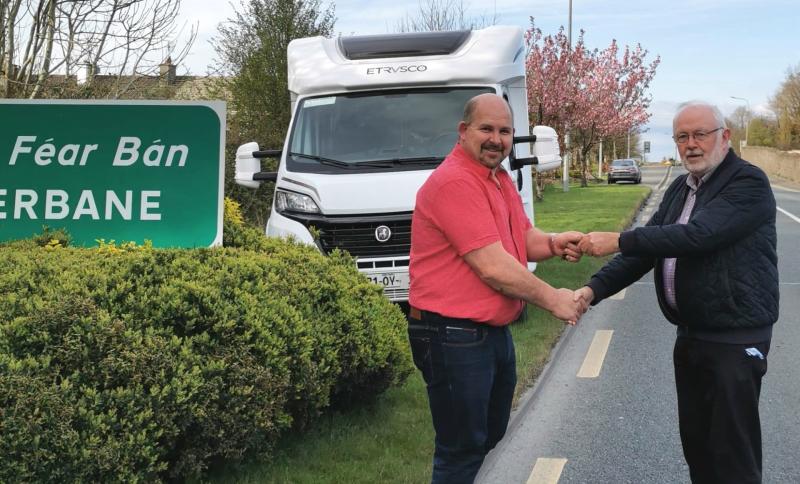 William Flaherty from Ferbane, County Offaly, receiving the keys for his new 5 berth Etrusco Campervan, which he won in the North Tipperary Hospice Campervan draw.

BOBBY Reidy’s Sky Farmers Pub in Newtown was the scene of much excitement recently when, full of excitement and anticipation, the crowd assembled to see who would be the lucky winner of the North Tipperary Hospice Campervan Draw which was run so successfully on the “Winacamper” website.

This was by far the most ambitious fundraising project ever undertaken by the local hospice movement since its foundation over 30 years ago and, as expected, it turned out to be an absolute success raising over €100,000 in badly needed funds.

The draw was organised by the good people from Winacamper and was supervised by independent scrutineer, Elaine Flynn of Slattery Flynn & Co. Accountants, Nenagh, who also drew the winning number. The lucky winner of the magnificent 5 berth Etrusco Campervan was William Flaherty from Ferbane, County Offaly, who couldn’t believe his luck when he received his telephone call from draw co-ordinator Paddy Heffernan.

Before the draw took place, Paddy Cadell, Chair of the North Tipperary Hospice Board of Management, thanked all the 7,995 supporters who purchased tickets and wished everyone the best of luck. He also thanked Billy and Henry from Winacamper for the professional and efficient manner in which the organised and ran the draw on behalf of the Hospice and wished them success in all their future endeavours.

Referring to the local efforts made to ensure the draw was a success, he thanked the co-ordinator, Paddy Heffernan, for the huge amount of work and effort he had put in, and also the local committees in Nenagh, Roscrea, Templemore and Thurles for their work in ensuring that all tickets were sold in advance of the draw.

He reminded people that although this project had been an outstanding success, it still leaves much work to be done to raise the balance of the €400,000 needed annually to finance the many services provided throughout the county both in the Cancer Support Centres in Nenagh, Thurles and Roscrea and the In Home Care services provided to terminally ill patients which has been of such invaluable assistance to so many families over the years.

Speaking after the draw Paddy Heffernan thanked Bobby Reidy for making his premises available for the event. He reiterated the Chairman’s comments in relation to Billy and Henry and thanked all the local papers and Tipp FM for their continued support in promoting the draw since its launch in October 2021.

He made special mention of Caroline Hassett, who through her Instagram page “A House by the Trees” had helped enormously in promoting tickets sales. He thanked also all the staff at Pat Horan Motors who supplied the Campervan and were at hand to help out at all times throughout the campaign. Paddy expressed the hope that, now that the worst of the Covid pandemic is behind us, we can return to the more traditional fundraising events associated with the Hospice Movement starting the Annual Sunflower Days which will be held this year on Friday June 10th and Saturday June 11th.