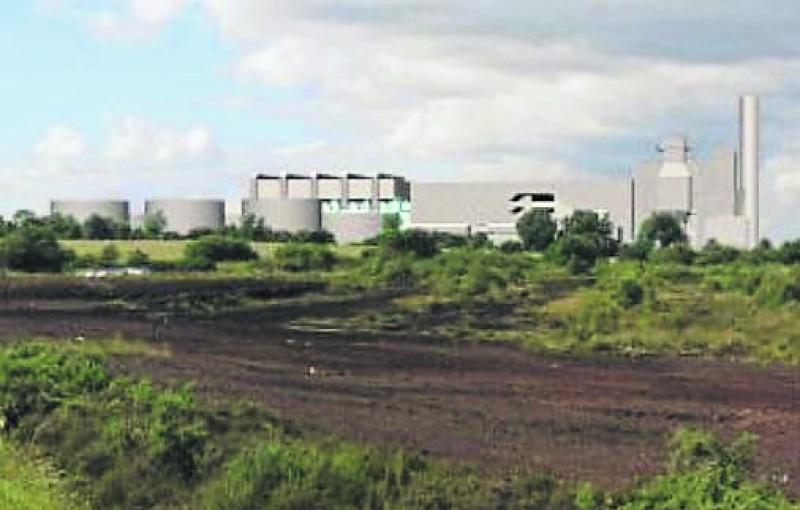 An architect's image of the gas plant proposed in 2010

BORD na Mona has not ruled out the construction of a new gas-fired power station in Offaly.

The proposed project is being lined up for a 25-hectare site at Derrygreenagh near Rhode in the north of the county, according to Cllr Noel Cribbin.

The power plant was first granted planning permission in 2010 but did not proceed.

However, an extension to that consent was granted in 2019 and sources have indicated the electricity generation station, which would be by far the biggest in the Bord na Mona portfolio, is under active consideration.

Other sources close to the energy company said a decision hinges on the projected price of gas on the international market a couple of years from now.

“The company is reviewing options to develop new generation capacity on this site in light of the current pressure on the electricity system,” the spokesperson said.

In September Bord na Mona announced a plan for an energy park across 3,000 hectares of its land in Offaly, Westmeath and Meath.

The company said the park would be a “sustainable development” with direct access to Ireland’s main motorway and fibre networks.

The company aims to co-locate what it calls industrial-scale high demand energy users such as data centres with low to zero carbon energy generators in the park.

The company said the energy park aims to reduce costs and emissions while ensuring energy resilience and security.
The energy park's brochure says: “The Bord na Mona Energy Park will generate 200 MW+ of low to zero carbon electricity from sources which may include wind, solar and gas, and will house energy storage facilities which may include battery and hydrogen.”

As part of its 'brown to green' shift away from peat, Bord na Mona already generates electricity from wind and biogas and has plans for solar.

Speaking at a meeting of the Edenderry Municipal District, the Fine Gael councillor also said international interests were linking up with Bord na Mona for the project.

“This plant is between Ireland, Germany and I think Poland, and that's going to be announced in the next few weeks,” he said.

“This isn't just big for the Midlands, it's big for Ireland. You can imagine what that would be worth to the Irish economy.

“Certainly we wouldn't have worries with rates from now on if we could get something like that”.

Offaly County Council is currently relying on a Government grant, valued at €1.7m for next year, to make up for a shortfall in commercial rates resulting from the closure of the ESB peat-fired station at Shannonbridge and associated Bord na Mona bogs.

Cllr Cribbin said large electricity consumers such as Intel should consider Offaly as a location for plant expansion instead of other parts of the country such as the outskirts of Galway city, which he believes is already congested.

He said Offaly County Council should seek a meeting with Bord na Mona for clarification of the energy company's plans for electricity generation.

The councillor also said he was seeking a meeting with the junior business minister, Damien English TD, so that details of the Derrygreenagh proposal could be confirmed.

Cllr Cribbin said he understood Intel has plans for a chip manufacturing facility which would create 10,000 jobs on a site in Galway.

He said he happened to be in Ballybrit the previous Saturday morning and “you can't get in or out of it” whereas a Midlands site would be just 40 minutes away from Intel's headquarters.

“I know this [Bord na Mona power plant] is 600 MW. If that Intel plant came to the Midlands, that would take up 100 MW.”
The development of a new gas-fired power station would be controversial given the Government's plans for emissions cuts but

Cllr Cribbin has been told Bord na Mona will consider providing the plant to assist with the avoidance of blackouts during the country's continued transition towards a greater proportion of renewable energy generation.

Data centres have come under fire in recent months because of the vast amounts of electricity required to run them but their proponents argue they are essential for the maintenance of efficient, modern communications systems.

Mark Mahon, senior engineer with Offaly County Council, said a tender had gone out for a €75,000 research project on the feasibility of locating data centres at the Rhode site.

Entitled 'Exploring Data Centre Integration With Renewable Energy and Green Energy in the Midlands', the project was described by Mr Mahon as a “cutting edge” study which will seek “to tie a number of threads together”, including energy and hydrogen and the potential for locating data centres.

Mr Mahon noted that Eirgrid's 'Shaping Our Electricity Future' roadmap released earlier that day had made reference to what he said was the “regionalisation” of data centres.

Separately, research is also being jointly undertaken by Bord na Mona and others on the development of a demonstration in hydrogen technology in Rhode. “That's quite technical but I think it's going to be very interesting when it moves on a little further,” said Mr Mahon.

Bord na Mona's power station near Clonbullogue, which is co-fired with peat and biomass, is a 128 MW facility and the company also has a 116 MW gas-powered peaking plant at Ballykilleen.

It has Offaly's largest wind farm at Mount Lucas, a 28-turbine facility with a maximum output of 84 MW. A 21-turbine wind farm is being constructed in the east of the county at Cloncreen and is expected to begin supplying the grid in the last quarter of next year.

It got the go-ahead from planners earlier this year for a 21-turbine wind farm at Derrinlough in west Offaly and has proposals for a 17-turbine facility at Lemanaghan, a project which has run into opposition because of its proximity to an early Christian monastic site.

Bord na Mona has ended peat harvesting and has embarked on a bog restoration programme which aims to reconstruct peatlands as carbon sinks.

Meanwhile, two other wind farm projects in north Offaly, Moanvane and Yellow River, could finally be moving towards construction, Cllr Cribbin told the Tribune on Thursday.

The 12-turbine Statkraft Moanvane wind farm is proposed for private land near Walsh Island while SSE's Yellow River wind farm, which will have 29 turbines, will be on private land between Croghan and Rhode.

Both received planning permission a number of years ago.

Application for large residential scheme is refused in Offaly