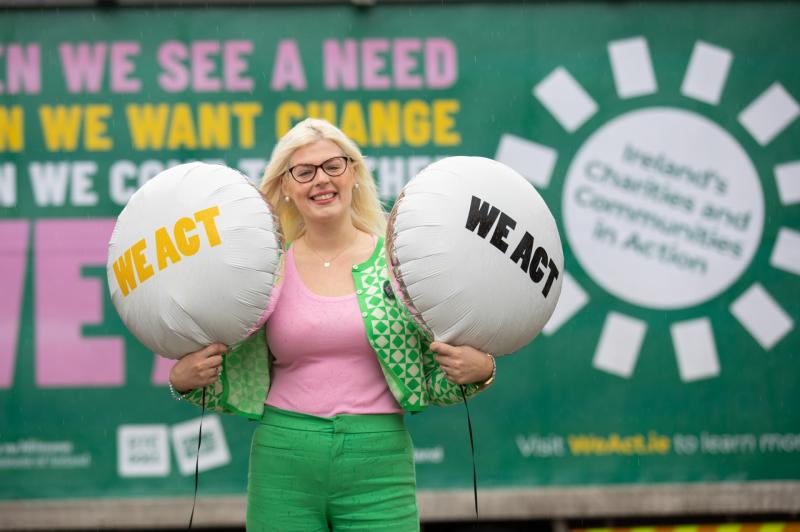 Kirsty Real from Clara, Offaly was involved in the launch of We Act this week, a new national campaign aimed at building on the huge upswell of community activity during Covid-19 to help drive the post-pandemic recovery.

Representing Young Social Innovators for which she is an Advocate, Kirsty featured in a promotional photocall which took place to coincide with the launch of We Act.

Young Social Innovators aims to empower young people to use their talents, insights, passion and creativity to come up with innovative solutions to social challenges.

In addition to the Young Social Innovators, charities and community groups across Offaly are joining and being encouraged to join the We Act campaign. The campaign aims to promote the value and impact of Ireland’s charity and community sector. There are 34,000 organisations in the sector, employing almost 165,000 people and with a further 1 million volunteers.

Commenting on the launch of We Act, the campaign’s manager, Sarah Monaghan, said: “The Covid-19 crisis brought a renewed public focus on the work of our sector. From support lines for older people to laptops for children in emergency accommodation, when we saw a need in our communities – in Offaly and right across the country – we responded to it.

“The pandemic demonstrated that, in times of real need, charities and community groups are at the forefront of our national response. We saw a shift in values towards equality, justice and supports for the most vulnerable in our communities and across the globe. Now, there needs to be a concentrated effort to ensure the innovation, goodwill and community cohesion continues as we recover from the pandemic.”

A survey of 1,000 people in Ireland conducted on behalf of the We Act campaign found:

- 70 per cent of people believe the lives of people in their communities would be impacted if charities disappeared overnight but just 8 per cent believe they interacted with a charity or community group in the past year.

- 63 per cent of people have given to a charity or community group in the last three months.

- Despite the fact that board members in both large and small charities are unpaid volunteers, over 40 per cent of people believe those who serve on charity boards are paid a salary.

A goal of the We Act campaign is to bridge the gap between some of the views raised in the research and create awareness of the value and impact of charities and community groups in Ireland.

“We know from the incredible support during the pandemic that people in Ireland have a huge affinity for good causes and we can see from the research that they understand the role some charities have in providing vital services,” said Sarah Monaghan. “However, a majority of the public feel charity is for someone else. This campaign wants to celebrate the wide breadth of groups who have an impact on our lives every single day – even if we don’t realise it.

“Think of your local tidy towns association, fun run, Men’s Shed, community gardens, youth club, cancer or dementia supports, or animal rescue. All of these have a positive impact on both our lives and our wider community. We hope a better understanding of the benefits of charitable work and volunteering will drive community and voluntary action in communities across Offaly and nationwide, which – in turn – will help drive the post-pandemic recovery.”

The We Act campaign will run over the next three years. It is funded through a grant from RTÉ Does Comic Relief, distributed by The Community Foundation for Ireland.

Denise Charlton, Chief Executive of The Community Foundation for Ireland, said, “The Community Foundation for Ireland works with and supports more than 5,000 voluntary, community and charitable organisations. There are a million stories of the positive impact they have on families, homes and individuals across Ireland, often out of public view. We want to see more people working and staying in the sector, more people volunteering and engaging at a community level, more people knowing what services are out there should they need them, and more people feeling part of something positive and bigger than themselves.”

PROPERTY: House on large site in Offaly up for auction at a very attractive price