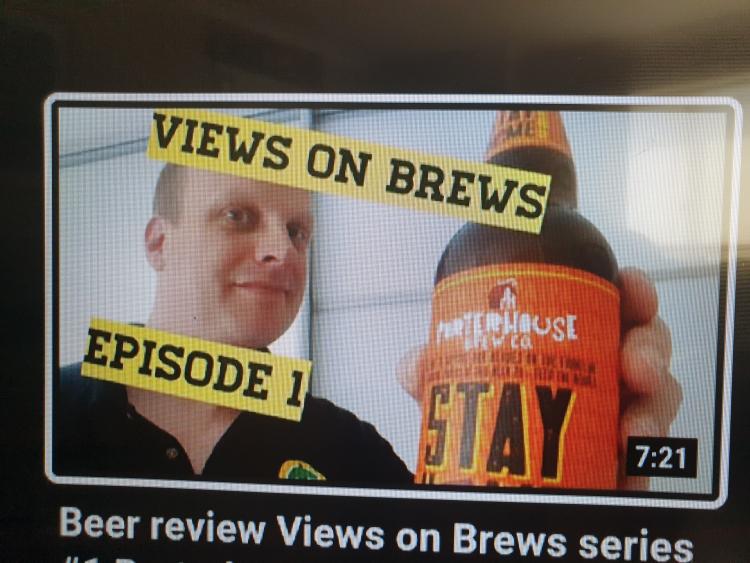 WERE you laid off during lockdown? And what did you do?
There's the gardening, the home repairs, the painting, the DIY, the baking, the Zooming, the eating, the drinking and the Netflix.
We could go on. How about the brewing? Or the YouTubing?
One Tullamore man, Brendan Sewell (he's a native of England, so perhaps that explains the surname) sat down and decided to put himself and his passion online.
He's the weekly craft beer columnist in the Tullamore Tribune and Midland Tribune and his reviews are also published here on offalyexpress.ie
Otherwise, when the world is in anything resembling a normal state, he's looking after the food in the eaterie on the first floor of the Bridge Centre.
Now, in addition to the day job, the occasional home brewing, and his newspaper column, he has become a YouTuber.
'Views on Brews' is Brendan's beer reviewing and home brewing YouTube channel and he set out his stall in simple terms when he launched it on the worldwide web.
“I'll be giving you my views on beers brewed from all around the world with particular focus on Ireland because that's where I live,” he told his viewers.
“I'll be doing a few home brewing demonstrations, or at least how I brew at home. Generally, having a bit of craic on YouTube. I thought I'd give it a go.”
And give it a go he did. The channel is barely a month old and he has already uploaded at least 26 videos, each bursting with content on beer.
How it's brewed, how it tastes, how it smells, how it feels in the mouth. No territory is left unexplored.
For his first YouTube Views on Brews review he dug deep into the beginnings of craft beer in Ireland. Anyone who lived in Dublin in the 1990s will remember Porterhouse emerging on the scene, a curiosity at the time, a rarity which was not replicated for many years.
Now nearly every county has a craft brewer (remember Bo Bristle in Banagher?) but it was apt that Brendan rolled the beer barrel back to where it all began, or as he put it himself, to Porterhouse, “the forefathers of the modern craft beer movement along with a few others”.
He says: “I've always got a place for Porterhouse and I always like their beer as well. Especially the ones they have on tap in the pubs around Dublin.”
For the last two-and-a-half years he's been faithfully tapping out his column for the Tribune and during the Covid-19 lockdown he decided to “whip it up on YouTube”.
After introducing himself, the brewer, the beer, its style, recipe and alcohol strength, he gets down to business with the words “Time to crack it open”.
Even watching Brendan pour the drink is an education in itself; so much depends on the angle, the volume and the glass.
Appropriately, the first beer to feature on Views on Brews was called 'Stay at Home, Isolation IPA', a 500ml bottle whose label he shoved towards the screen and remarked: “Hopefully the camera is focussing in on that”.
He added: “Excuse my camera skills at the minute”. But there were no excuses required because the production values from this father of two were as good as many a YouTuber testing the waters of this hugely popular medium.
He has added music, graphics and a backdrop which displays some of the ingredients which go into making a typical homebrew.
His delivery is off-the-cuff but affable and incredibly informative, all designed to appeal to the senses of scent, taste and sight. Hearing too, because at least once he holds a glass to his ear and takes in the snap, crackle and pop of the ferment he's trying.
Mouthfeel is crucial as well and on occasion he just stops short of gargling the tipple as he attempts to extract every last flavour sensation from the tipple being tested. Have a look for yourself on YouTube.
And 'Slainte!'