GALLERY: Clara puts on spectacular Scare in the Square event 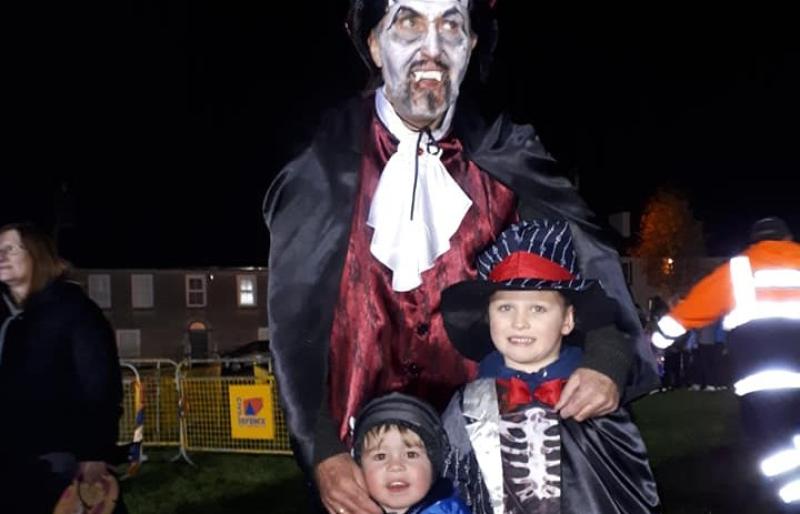 This year’s Halloween Scare in The Square was a huge success again with well over One Thousand people turning out on the Greenfield in Clara for the event.

Dervill Dolan, chairman of the organising committee, said he was thrilled with the turnout and the response from everyone in the community and the kids and adults made a huge effort dressing up in their Halloween outfits to enjoy the fun event which was held on the Greenfield at The Square in Clara this year.

The Scare featured musical entertainment from the Clara Town Band and ‘Special Guests’ on the night included ABBA, George Ezra, Ed Sheeran, One Direction and The Beatles.

Dracula caused a major ‘power surge’ when he appeared from his coffin and all the kids were really frightened that he might hurt Princess Elsa. The quick thinking of the Hocus Pocus Witches, The Hulk, Spiderman, Ironman and the Ghostbusters with great assistance from Celsius Doolan and the lads from Wilker Ambulances was enough to scare Dracula back into his coffin and Princess Elsa was safe again in the arms of ‘Olaf’.

Princess Elsa and Olaf and all the Disney characters were very popular with all the kids and the highlight of the night concluded with the kids and adults dancing to the BABYSHARK song on the Greenfield. MC for the night Barry Flynn with great assistance from his sons Adam and Arron kept everything running smoothly.

Dervill said, "The Scare in The Square’ kids party epitomises everything that is great about the community spirit of the Clara people. Everybody I asked to help were only too delighted to help in any way they could."

Dervill thanked all the people who took part in the event, the Clara Town band, the local Gardai, Offaly Civil Defence, Offaly County Council and Tullamore Municipal District, Clara GAA Club, Fr Keary, Clara Family Resource Centre, Celsius and Mary Doolan, Bemis, Wilker Ambulances, all the people who helped with costumes, the stage, the lights and sound equipment, the tent, parking and stewarding and everyone who helped to make the night such a great success.

"It was a fabulous night and all the kids (big and small) really enjoyed the magic of Halloween night and the kids went home a little scared of Dracula but buzzing with the excitement of it all," Dervill concluded.