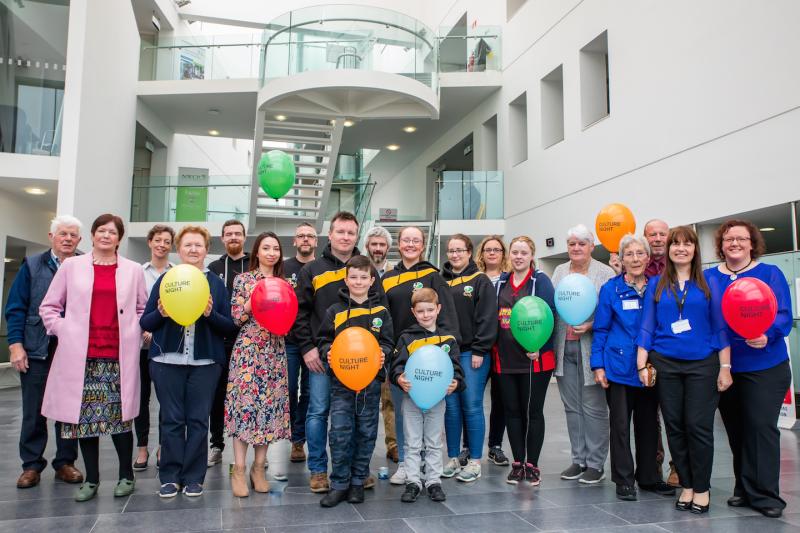 On Friday September 21, people will lose themselves in their imagination and an explosion of creativity as Offaly comes alive for Culture Night, Ireland’s annual nocturnal cultural extravaganza.

Offaly is delighted to be once again taking part in Culture Night and the programme of activities is now available on www.culturenight.ie/offaly

Commenting on this year’s programme of events, Arts Officer, Mary Brady of Offaly County Council said: “Now in its eighth year, Culture Night Offaly is full to the brim - a spectacle of song, music, exhibitions, screenings, dance, virtual reality experiences, talks, tours and so much more with venues and public spaces across the county hosting a programme of FREE entertainment from Banagher, Birr, Clareen, Crinkle, Ballyboy to Lough Boora, Tullamore, Clara, Edenderry and Rhode.

Culture is catching and across the county there will be a spectrum of cultural explorations and unique and high-quality cultural events to experience. Culture Night Offaly recently announced that renowned Irish artist Michael Bulfin will facilitate an intimate and engaging walk at Boora, focusing on his artwork ‘Sky Train’ and creative response to its natural and industrial heritage from 6.30-8pm on the night.

Choral Carousel is an assemblage of the talent of some of Offaly’s school, workplace and community-based choirs with one unique performance of choral delights from classical and pop to rock and gospel including Banagher Trinity Gospel Choir; Le Chéile Singers (Tullamore); HSE Tullamore Staff Choir; Offaly County Council Choir and St. Joseph's National School Choir (Tullamore) at Áras an Chontae, Tullamore from 4-7pm.

Birr Theatre and Arts Centre present the Opening Night of touring exhibition, IN-SITES/ÓN CHEAPACH from 7-8.15pm featuring talks with artists, Monica de Bath, Lisa Fingleton, Gareth Kennedy along with local photographer Tina Claffey exploring how, in different ways, these artists address our relationship with a constantly changing environment. The talks will be followed by a screening of the film Post Colony by Gareth Kennedy. New and existing works in the exhibition reflect on the role of art and ecological practices in highlighting historical and contemporary complexities of land use and is curated by Denise Reddy.

SONIC POLLINATORS composed by Karen Power featuring a live performance with Quiet Music Ensemble takes place at Birr Theatre & Arts Centre from 8.30-9.30pm. Quiet Music Ensemble, an experimental music group create a musical dialogue with Power’s composition of live recordings of bees, plants and their surrounding habitats. In 2017 Power made multiple visits to Offaly to listen to and make full frequency recordings of bees, plants and their surrounding habitats. This performance will create a synthesis between music and nature’s pollinators. The project is a Creative Ireland co-commission organised by Offaly and Laois County Councils.

VRparty, the midlands only VR studio present the incredible world of Virtual Reality / 360°short films from 10am-10pm, with the award-winning Aurora from Pink Kong Studios; Allumette by Penrose Studios, a sad tale loosely based on Hans Christian Andersen's short story, The Little Match Girl. In addition, a 360°sneak peak of Faoladh, a tale of a Celtic boy in the late 9th century Ireland and an impending Viking invasion, and David Whelan’s Titanic, an immersive experience of the doomed ship through the eyes of a survivor.

A fascinating look into the world of David Rooney, well-known illustrator and singer-songwriter takes place at Houghs in Banagher from 8pm. Rooney will talk about his illustrations in the acclaimed 1916 Portraits and Lives book, a collection of biographical essays published by the Royal Irish Academy and based on the academy’s Dictionary of Irish Biography. In addition, there will be a screening of videos combining original music/songs and artwork, and a performance of songs from
his debut album Bound Together.

The launch of The Lea-Green Down, an anthology marking Patrick Kavanagh’s fiftieth anniversary since his passing will be launched in Tullamore Library at 4.30pm attended by its editor Eileen Casey. The anthology attempts to evaluate Kavanagh’s legacy and his influence on contemporary poetry, has original Kavanagh poems as well as over 60 poets featured. The anthology is published by Fiery Arrow Press and partly funded by South Dublin County Council and Offaly County Council.

Culture Night Offaly has so much more to offer with music, performance and Tai Chi at The Growery, Birr’s ‘social’ garden; Curious Taster’s Journey tours at Tullamore D.E.W. Old Bonded Warehouse; folk music inspired by the historical influences of Irish traditional music in America with banjo player and vocalist, Greg Cotter and button accordionist, Mary Flanagan at Leap Castle; Open Air Virtual Art Exhibition draws on the works from Crinkill National School pupils and projected from a 1940’s style Phone Box; short film at Áras an Chontae by artist, Julie Spollen on composer Karen Power’s SONIC POLLINATORS project; multiple genres of music in Edenderry with Music Generation Offaly Westmeath in partnership with Youth Work Ireland (Midlands) and the Edenderry Youth Café showcasing the work of the Edenderry Rockers; and students and teachers from the Eden School of Music performing live.

Minister for Culture, Heritage & the Gaeltacht, Josepha Madigan TD, said: “We are lucky to have a rich and varied culture in Ireland. Culture Night once again provides people across the country with the perfect opportunity to get out and immerse themselves in it for one evening. Visit a venue you might never have thought of visiting before or surprise yourself and explore a new cultural genre."

"With a huge choice of venues open from museums, galleries, theatres and studios to libraries, parks and historic buildings, and even more events programmed, I encourage everyone to come out and enjoy an evening of cultural discovery. Whether it’s a one-off performance or getting a glimpse behind the doors of our beautiful, historic buildings, I hope people across Ireland will take a little time between now and September 21st to explore the programme and plan your own Culture Night.”

Pick up a Culture Night Offaly brochure in your local library and a wide range of venues across the county or download from www.offaly.ie.

Go to www.culturenight.ie/offaly  or Offaly Arts on Facebook for all information on events in your local area. Booking required for some events.

Culture Night is brought to you by the Department of Culture, Heritage and the Gaeltacht and the Creative Ireland Programme in partnership with Offaly County Council.