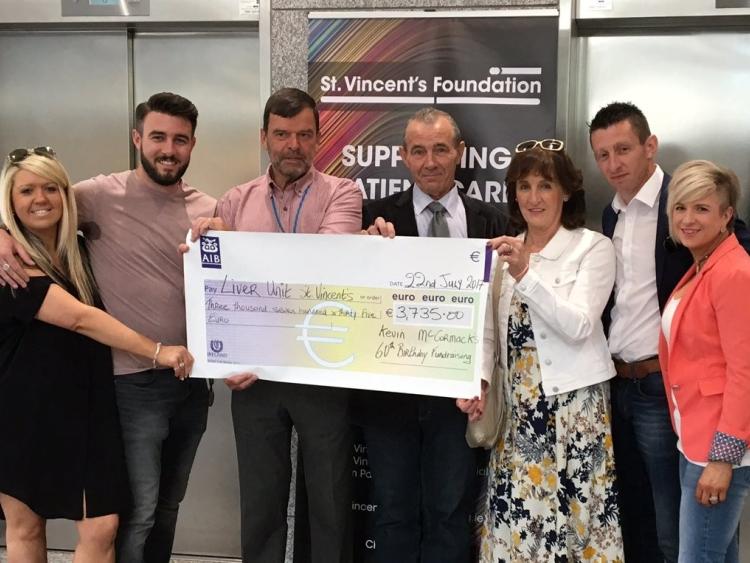 Kevin McCormack with his wife Una and family members presenting a cheque for €3735 to Mr John Hickey from the St Vincent’s Foundation. All monies are used by the Liver Transplant Unit.

Portarlington man, Kevin McCormack came up with a novel way to celebrate his 60th birthday recently by donating €3,735 to the Liver Transplant Unit in St Vincent’s Hospital in Dublin.

Kevin explained, that having been the recipient of a liver transplant last year he felt that he had “won the Lotto when a donor liver became available.” When his family held a party to celebrate his 60th birthday recently he decided, that, instead of receiving presents he would ask family, friends, and former business associates to donate money to the Transplant Unit in St Vincent’s Hospital who gave him a Second chance at life.

Kevin’s health problems began in 2013 when he was diagnosed with autoImmune hepatitis and he developed cirrhosis of the liver. Over the next two years despite receiving intensive treatment at the Beacon Clinic and St Vincent’s Hospital his health deteriorated. He was placed on a transplant list in December 2015 and in February 2016 he got a call from the transplant team to say that a suitable donor liver had become available. Kevin underwent the successful eight-hour transplant operation under Professor Diarmuid Houlihan and his team and remained in hospital for a further two weeks post-surgery.

Kevin returned to his home in Kilbride where under the watchful eye of his wife Una he has made a full recovery. Kevin says he has many people to thank especially the family of the donor who despite their own terrible loss phoned the hospital on four occasions the day of the operation to ascertain how the operation was going, he was very moved by their generosity and concern for his wellbeing. He also thanked all who contributed to his collection for the hospital.

As Kevin continues the road back to full health he made an appeal to all to sign and carry organ donor cards with them as it gave him a second chance at life. He concluded by saying: “I have my Lotto inside of me thanks to a very generous family who I do not know and never met.”