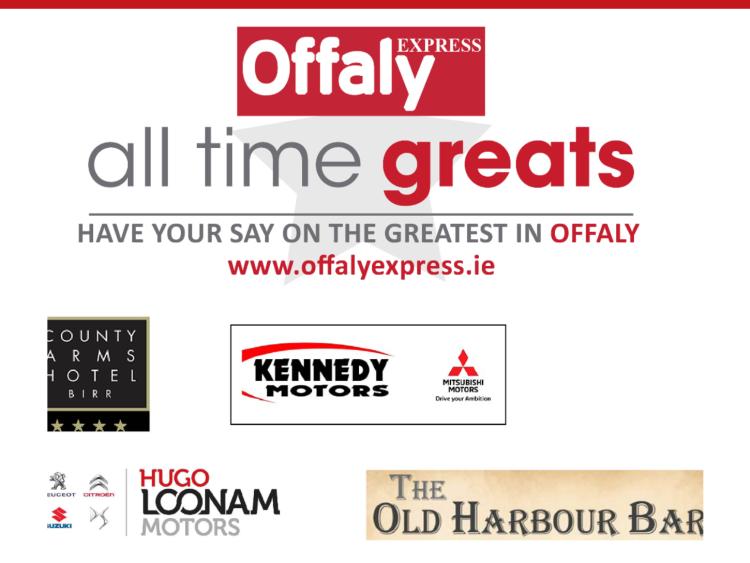 A shortlist of 16 was drafted with some of Offaly's finest exports drawn from the areas of sport, politics, music, television and business duelling it out for votes, and following a week of voting, we now have our quarter-final line-up.

The draw has thrown up some titanic tussles, including a match between footballing greats Martin Furlong and Matt Connor.

Millennium man Brian Whelahan overcame former Taoiseach Brian Cowen with a whopping 75% of the vote in the last 16 round.

Football icon Matt Connor made his way to the quarter-final by beating off competition from camogie great Miriam O'Callaghan in the round of 16.

He is joined by former teammate Martin Furlong and the two Offaly legends will go toe to toe for the Offaly GAA vote.

Golfer Shane Lowry took a shot and drove past Tullamore Dew creator Daniel E. Williams in the round of 16 after a very competitive poll.

GAA superfan Mick McDonagh will go up against Lowry after beating off competition from Mundy in the round of 16.

Legendary jockey Pat Smullen had made it to the quarter-final after overcoming nationalist hero Eamon Bulfin in the last 16 round.

Youth action hero Sister Jenny received the most votes of any contender in the first round as she overcame comedian Neil Delamere.

Following the quarter-finals and semi-final, two finalists will battle it out in one final poll to crown the county's greatest ever person.

You can vote in all four quarter-final matches below: