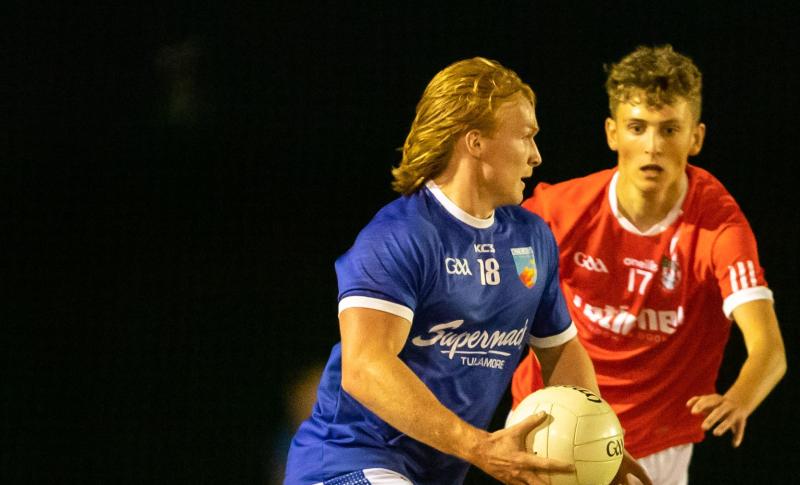 CHAMPIONS Tullamore and the long time dominant force in Offaly, Rhode have been the favourites to contest the Senior Football Championship final from the start of the year. However, they will be on high alert for the tough challenges certain to be posed by Edenderry and Ferbane in the semi-finals next weekend.

Tullamore beat Rhode in a replayed final last year and they have been the two form teams this year, topping their groups and qualifying direct for the semi-finals. Edenderry and Ferbane have gone the quarter-final route and both will mount big challenges.

The accuracy of the impression that there is a big game in Ferbane will be revealed in all its glory in Tullamore on Saturday afternoon.

Ferbane have not set the world on fire at all this year. They were mediocre in the Division 1 Football League final defeat by by Tullamore and have blown hot and cold in the championship. They were fortunate to draw with Cappincur in the first round, lost to Tullamore and got the win they needed against Shamrocks to get into the quarter-finals.

They flirted with disaster in the quarter-final against Clara. Trailing by two points in injury time, they got three points to advance but would have had no complaints if they were ousted.

It is far removed from the form of champions and the results should make Rhode warm favourites for this. They eased out of the group with three wins out of three and their attack will hurt any opposition in Offaly. In Niall McNamee, Anton Sullivan and Ruari McNamee, they have three of Offaly's best forwards, proven winners as well as a bright emerging prospect in Aaron Kellaghan – at the moment, Kellaghan won't shoot the lights out every day he goes out but there will be plenty of games where he pulls the trigger.

Everything points to a Rhode win here. The form of both sides, yet this semi-final is absolutely ripe for an upset and Rhode are sitting ducks. We can be fairly sure of the way Rhode will play – they are a great consistent side and after losing to Tullamore in last year's final, they are hungry to add another one to their collection.

The big enigma in this game is Ferbane. They haven't really performed but they are in the semi-final and there could be one very powerful sting in the tail from them. Their dual commitments with Belmont hurlers are an issue for them but Ferbane are better than they have been playing. They also have very good forwards, potential match winners in Cian Johnson, Joe Maher and Cathal Flynn. They have a strong back bone down the core of their team and they could click.

It is very hard to go against Rhode in this game but they are still missing key players through injury. Niall Darby and Eoin Rigney are cruel losses to their defence while they have a few ageing players, ones in the Winter of their career. The way Rhode keep coming back year after year, their sheer consistency has been phenomenal and they will be confident of reaching another final. The possibility of them running out of steam, however, is also a live one and this game is a lot harder to predict than the results suggest.

In some ways, there is a bigger potential for an upset in the meeting of Tullamore and Edenderry but the reigning champions and title favourites have been very steady so far this year.

They topped their group with three wins out of three and now face an Edenderry side who have performed well and whose only defeat was a narrow one against Rhode in the first round.

Without being brilliant, Edenderry did what they had to do in the quarter-final against Shamrocks. They weren't at their best, only clicked into top gear in bursts but they got on top in the second half and were able to pull away for the win.

Impressions, without real tangible evidence, can often leave people with egg on their face. There is an impression that Ferbane have a big game in them and this could be blown out of the water by Rhode on Saturday. It is also hard to escape the belief that there is something missing in Edenderry at the moment. On the surface, they are motoring well, they are getting the results and they certainly have the players to win the Dowling Cup.

However, they haven't been fully convincing and it remains to be seen if they can find the extra gear that they will need at this stage of the championship. We can put our finger on one thing that Edenderry have been missing this year and that is their star forward Cian Farrell. The sharp shooting forward has been out with a cruciate injury but is not far from getting back. He was named to start against Shamrocks but didn't feature and Edenderry won't be taking any chances on his fitness.

If he is not right, they won't play him but with an extra two weeks under his belt, he could feature at some stage. If he does, Edenderry will be a much tougher proposition – his value to them is immense and he is one of the best forwards in Offaly. Even without him, Edenderry will have a chance in this one and will run Tullamore close.

Tullamore, however, have been impressive this year. They have been badly hit with injuries. John Furlong, Oisin Keenan-Martin and Cormac Egan haven't played in the championship this year. Furlong and Martin won't but Egan came on as a sub in Tullamore's easy win over St Patrick's in the U-20 football final last week. He showed no ill effects from his hamstring operation and he will feature in this game, probably as a second half sub.

This is a big year for Tullamore. Football is on a high at all levels in the club and they desperately need to retain a senior title. Tullamore haven't managed to do that since 1926 and that is a huge blemish on the record of a club of its size. History doesn't matter really in football terms but it is a factor and it does put some pressure on this team.

They can't afford any other injuries but Tullamore remain the title favourites and with good reason. They play such an effective brand of football. They are so solid, so competent and their work ethic is great to watch. Yet they have flaws and Edenderry could expose them. Some times Tullamore struggle to put teams away and leave the door open for them. They don't kill off games and it doesn't seem to be in their nature to inflict big beatings on teams.

This is likely to be a tight game and Tullamore are vulnerable but at the same time, it is hard to back against them advancing to another final.