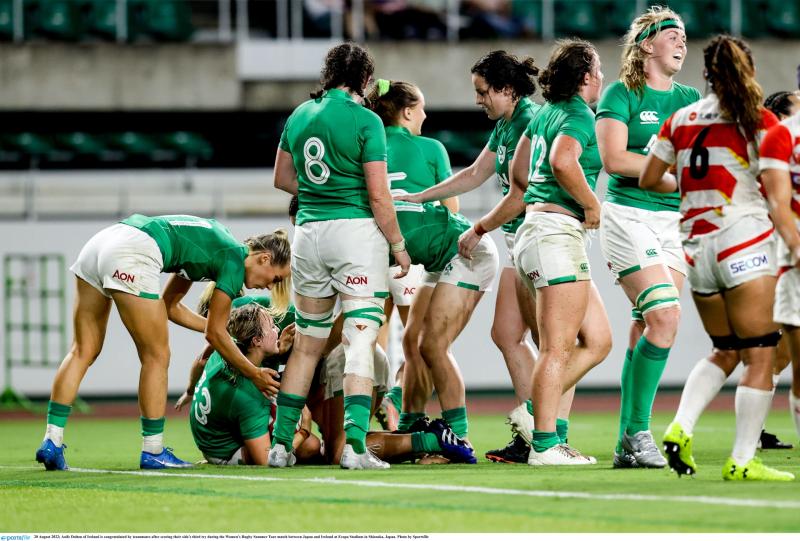 Aoife Dalton is congratulated after scoring a try for Ireland.

THE health of womens' rugby in Offaly was illustrated with a very strong representation on the Irish side who had a big win over Japan last Saturday.

An experimental Ireland had a very convincing and impressive 57-22 win over Japan in their first Summer Tour Test in Shizuoka, Japan.

Their team included two established players from Offaly while there were debuts for two more. Kilcormac woman, Nichola Fryday, one of Ireland's top players in recent years was the captain while Tullamore's Ailsa Hughes, now playing her club rugby with Railway Union, also started.

There were debuts for Aoife Dalton and Leah Tarpey with Dalton playing the full game. Dalton got a try in a dream debut while Tarpey, from Kilcavan in Laois but playing her club rugby in Tullamore, came on as a second half replacement.

All four players started their rugby careers in Tullamore. Hughes played camogie for Tullamore and Offaly before concentrating on rugby. Fryday is now playing with Exeter Chiefs in England.

Dalton is also a multi-talented sports woman. The Clara woman switched from Tullamore to Old Belvedere just before travelling to Japan. She has also played ladies football and soccer with Clara while her family oozes GAA blood. Her father Tony was a very good footballer for Clara in the 1990s into the 2000s, winning Senior Football Championship medals with them as well as playing minor and U-21 football for Offaly. Her brother Marcas is a very good footballer, playing for Offaly U-20s this year as well as the county minors before that.

Ireland play their second test against Japan next Saturday in Chichibunomiya.

The team that played last Saturday was: