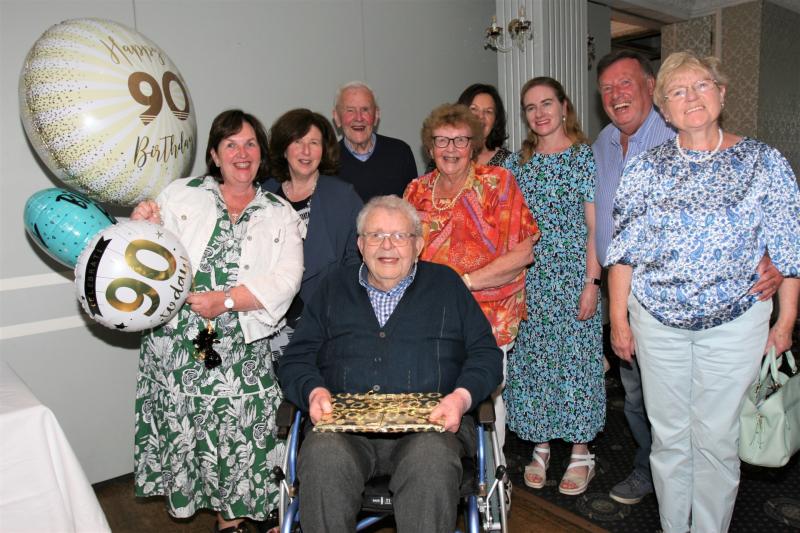 Gerry Dolan on the occasion of his 90th birthday with members of his family.

BIRR Stage Guild held a lovely get together with present and former members in attendance in Dooly's Hotel , Birr, on Thursday night of last week for one of their own, the wonderful and well known Birr man Gerry Dolan and the occasion was Gerry’s 90th birthday.
Gerry was presented with flowers and with a photograph album from his days spent with the Guild, and he was beaming from ear to ear as he browsed through this lovely gift recalling years gone by and obviously fondly remembered by Gerry.

In celebration of 90 years, Tommy Lyndon recounted Gerry’s life, something similar to a lesser version of “This is your Life”. Gerry shared his birthday with Johnny Cash, Elizabeth Taylor, Anthony Perkins, Patsy Cline, Des O’Connor, and around the world in 1932 some of the events making headlines included Amelia Earhart completing the first non-stop solo flight by a woman across the Atlantic Ocean, the BBC beginning experimental regular TV broadcasts and Radio City Music Hall opening in New York City.
After completing his Primary education with the Presentation Brothers, Birr, Gerry spent his Secondary school days as a boarder in Ballyfin College.
Tommy said “it was then back to the family business, living by then in Wilmer Road and working from Main Street”. He went on to give an account, according to Gerry, who was in conversation with Richard Kennedy some years back, that the social calendar in those days was very limited. “You had two cinemas going, the Rialto (Murphy’s) in the Square and the New Cinema in Brendan Street. You went out every night to the cinema, one cinema tonight and the other the next night just to get a change of programme.

“Music, and in particular singing, was always a part of Gerry’s life,” Tommy said and he mentioned how Gerry’s mother loved music and had a glorious soprano voice and regularly sang at shows in Oxmantown Hall. “His father loved films and had even started the first cinema in Birr, the Hippodrome, on the Main Street at the back of where Hedgerows is now. This was the era of the silent film so his Aunt Bridie was the accompanist on the piano,” he said.

Next up for Gerry was the Birr Stage Guild and it was recalled how his involvement and his wonderful glorious years took him through some great performances surrounded by people who were to become his lifelong friends.
“Gerry’s first involvement with the stage was when Frank McNamara asked him would he take part in a play, which he did, and that led on to Drama Festivals. Then, shortly after the Marian Hall was built, the Stage Guild was set up and Gerry soon became an active committee member, including Chairperson for eleven or twelve years. Pantomimes and Pageants were the staple diet for the Guild in the early days and these could run for a fortnight with matinees thrown in for good measure. In later years, Gerry became Chairman of the Western Region of the Association of Irish Musical Societies and was a member of the National Council. In that time, along with Anne O’Callaghan, he was deeply involved with instigating the AIMS National Choral Festival and hosting it in Birr for several years in the 60’s and 70’s,” said Tommy.

He continued: “Assuming character names such as - Baron Blowpipe, Captain Cockles, Andrew Carnes, Lion, Doolittle, Leopold, Gerry has taken on many personas in his stage life, always bringing that extra special something to his performances – a certain frisson in the audience as he entered on stage, whether the expectation of a wonderful evening of glorious singing and character portrayal, or because of his over-the-top costumes as a Panto dame – costumes lovingly let out here and tucked in there by Julia, Betty, Joan and Lily,” he explained.
Other interests Gerry had, we were told , was the Church Music, The Choral Society, the businessman, the day or night hackney service, the mini-bus trips. Tommy referred to a time that for him personally, “as a young boy, the man at the front of the Church on a Sunday morning, conducting us, Primary School children, as we butchered the Missa de Angelis at the monthly School Mass - the wonderful soloist at our Wedding, accompanied by the fondly remembered and sadly missed Annie Noonan, - the nights at the Waterford Festival of Light Opera, - on the Organ Gallery, wondering what hymn is he going to sing next - and just as I remembered Julia, Betty, Joan and Lily on costumes. I also recall that, even when we were down to the last Marietta biscuits backstage at the interval cuppa, there always miraculously appeared from under a napkin a nice slice of apple tart or a piece of curranty cake for our Ger Dolan – and sure isn’t he worth it,” finished Tommy as he wished Gerry a happy birthday.