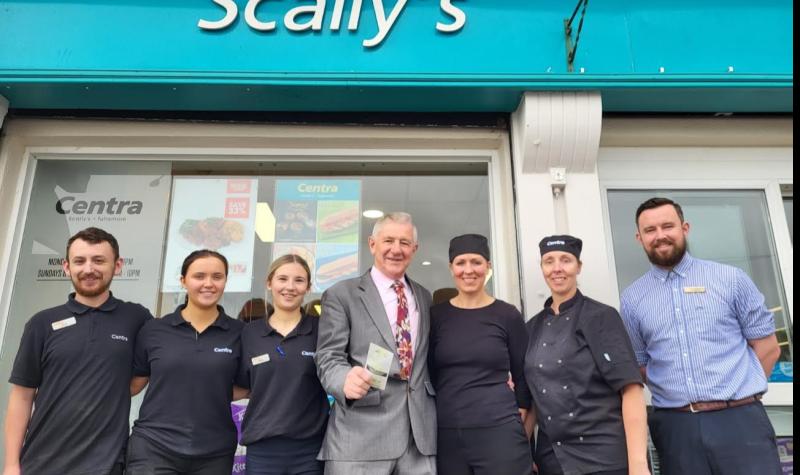 A massive €500,000 EuroMillions prize, the ticket for which was sold in Tullamore, has still not been claimed, Lotto headquarters has confirmed.

Staff at Scally's Centra on the Arden Road in Tullamore say nobody has come into the shop either to announce themselves as the winner.

Scally’s is still in celebratory mood after learning that one of its customers scooped the incredible €500,000 in the EuroMillions Lotto draw on Friday night June 10.

Players in the Tullamore area are being urged to check their tickets carefully after it was revealed that the Offaly ticket holder purchased their winning Quick Pick ticket on the day of the draw.

Shop owner Ben Scally was thrilled to get the call about the Friday night win: “It certainly was a Friday night to remember! We’re here 35 years now and with lots of local customers from the area, we’re hoping it might be someone from nearby who won the top prize amount. We have around 40 staff members so there’s great excitement in-store today. We’ll be encouraging all of our customers who come in today to check their tickets as soon as possible as someone now has a ticket worth €500,000.”

Scally's Centra will receive €5,000 for selling the EuroMillions Plus top prize winning ticket.

Meanwhile, the Offaly winner was joined by another lucky person from Kerry who also has a ticket worth €500,000. They too purchased a Quick Pick ticket on the day of the draw.

The two biggest winners in Friday night's draw are advised to sign the back of their tickets and keep them safe. The Offaly and Kerry winners should make contact with the National Lottery prize claims team on 1800 666 222 or email claims@lottery.ie and arrangements will be made for them to claim their prizes.

A EuroMillions player in the UK won the astonishing jackpot of €64,382,899 in the same draw.