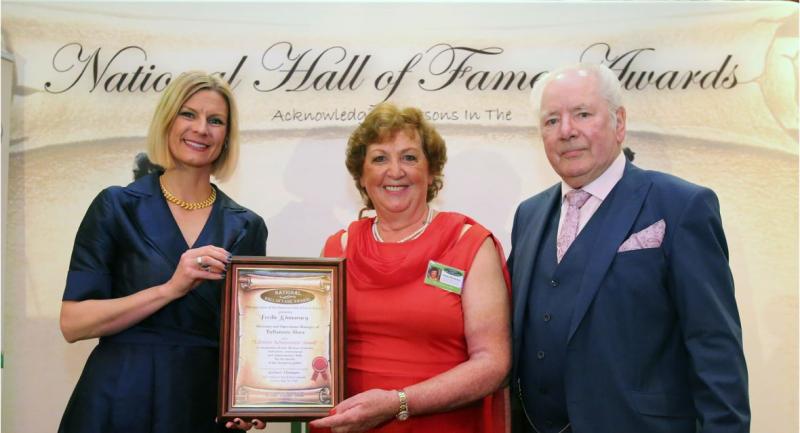 At a very prestigious event in Athlone last weekend, Freda Kinnarney was presented with a Lifetime Achievement Award, from the executive of the National Hall of Fame Awards, in recognition of her involvement with Tullamore Show & National Livestock Show. Mrs Pippa Hackett, Minister of State for Agriculture, presented the Award.

Michael Flanagan, CEO of the awards committee outlined that the Lifetime Achievement Award was for 28 years of service, dedication, commitment and organisational skills for the benefit of the showgoing public.

Freda’s role with the Tullamore Show started out as a steward in the cookery section of the show in 1992 and prior to her recent retirement, she was Secretary and Operations Manager for the Show, which is now firmly established as Ireland Premier Show.

During her acceptance address, Freda stated that “receiving this very prestigious award here tonight is such an honour and privilege, especially when you realise the scale and size of the Tullamore Show. She continued to say that “ It has provided me with the most wonderful opportunities and experiences that anyone could have in their lifetime. While there was a lot of work involved, it was so rewarding to see the successes, in so many ways, that were being achieved by the Show.

Tragedy in Offaly as teen dies in overnight road crash

However, she went on to say that “I truly acknowledge that I am only one cog in a big wheel, so I would like to accept the award on behalf of everyone on the TEAM that is Tullamore Show and National Livestock Show”. Freda then introduced her colleagues from the show committee who attended the event. These included recent chairpersons, lifelong members and a number of the current management, including Joe Molloy, chairman, Chelsey Cox, Secretary and Michael Dolan, head of the livestock section.