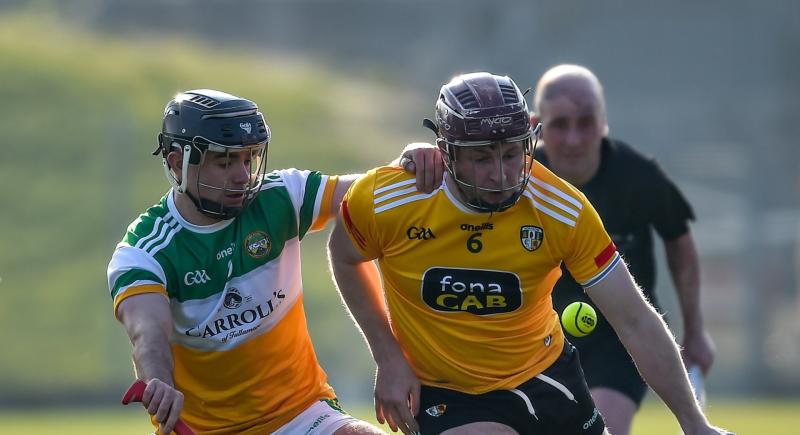 A DEFEAT won't prove fatal but Offaly senior hurlers certainly have a major point to prove when they travel to Belfast today (Saturday) for their Joe McDonagh Cup opener against Antrim.

Getting out of the Joe McDonagh Cup and back into the Leinster Senior Hurling Championship is the big target for Michael Fennelly's side this season but it represents a huge challenge for them.

As expected Offaly found Division 1 hurling too big of a jump for them this season but their defeat by Antrim in the relegation play off was the big disappointment of the campaign. In the group campaign, Offaly received heavy beatings from Galway, Cork and Limerick while they performed well in defeats by Clare and especially, Wexford.

Having come out of Division 2A and the Christy Ring Cup, Offaly were always going to get a rude awakening against some of the top tier counties but the defeat by Antrim was thought provoking. Offaly performed poorly on the day and were well beaten, 2-24 to 2-17, as they went straight back to Division 2 hurling.

The fact that it came against the Joe McDonagh Cup favourites was significant and Offaly are now fully aware of the work they have to do in the coming weeks. With six teams all playing each other in the Joe McDonagh Cup and the top two going into the final, there is scope for error but anything more than one defeat could prove fatal.

A win on Saturday would really set Offaly up but they are definite underdogs after that league relegation battle. A 2pm Saturday setting in Belfast is no simple fixture and Offaly have it all to do – they are travelling up on Friday evening.

The recent Antrim game certainly restored a bit of realism back into Offaly hurling supporters, not that anyone was getting carried away with themselves. It did, however, show the difficulty that the second tier competition will present for them and reminded people of exactly why Offaly had slipped back into the third tier.

The Joe McDonagh Cup has a gruelling schedule with five games in six weeks. Offaly will play on three consecutive weeks, have a week off and then playing on the following two weekends. It gives very little recovery time between games, very little opportunity to work on fitness and hard training and it means that injuries could prove very damaging – and you are very unlikely to go through such a condensed schedule without injuries.

It also pits Offaly against teams who have been able to beat them in recent years. Antrim, Down, Kerry and Carlow have all had victories over Offaly while Meath have ran them close. Antrim have been a step ahead of Offaly in recent years, but only a small one. You have to go back to 2015 for Offaly's last win over the northerners, a 2-17 to 0-19 league encounter in Ballycastle. Since then, Antrim have beaten them twice in the league and once in the Joe McDonagh Cup – in 2019 as Offaly headed for relegation – while they drew in 2020 on a day when Offaly performed well and should have won.

There has, however, been little between them and it is ironic that the most recent defeat was the worse one and came at a time when Offaly have seemed to be making progress. Despite the questions that this defeat raises, Offaly will be very competitive in the Joe McDonagh Cup.

They were very good in the 2021 Division 2A campaign when they had convincing wins over Meath, Kerry, Carlow and Down. It suggests that Offaly are well capable of beating this quartet, though there is a big difference between championship and league.

The target for Offaly is the Joe McDonagh Cup final and then give it everything in a winners' take all aim. That is very achievable but the fixtures schedule has not been kind to Offaly. It is full of banana skins – they have three of their five games away from home and these are also the longest journeys they could have had, in Belfast, Newry and probably Tralee. The two nearest counties, Meath and Carlow are at home.

They will have their work cut out to reach the final and it is very important to be realistic about where Offaly are and fair to a management and group of players who are doing their very best to lift things.

To win the Joe McDonagh Cup, Offaly are likely to have to play Antrim twice – it will be a surprise if Antrim don't reach the final, even if they lose to Offaly on Saturday.

Saturday's game is a hugely important one. The winners will have a bit of breathing room and will be able to approach the other games in a more relaxed frame of mind. The losers will be under pressure, fully aware that one more defeat will probably knock them out.

Offaly's pride will have been stung by their performance a couple of weeks ago and they will come out with all guns blazing. They will be a different side in Belfast but the game will tell whether the first result and performance was an aberration or a true reflection of the gap between the sides and where Offaly are.

They are underdogs but a really big performance and a win is certainly within Offaly's compass. It will be a very interesting game that will tell a lot for both counties.