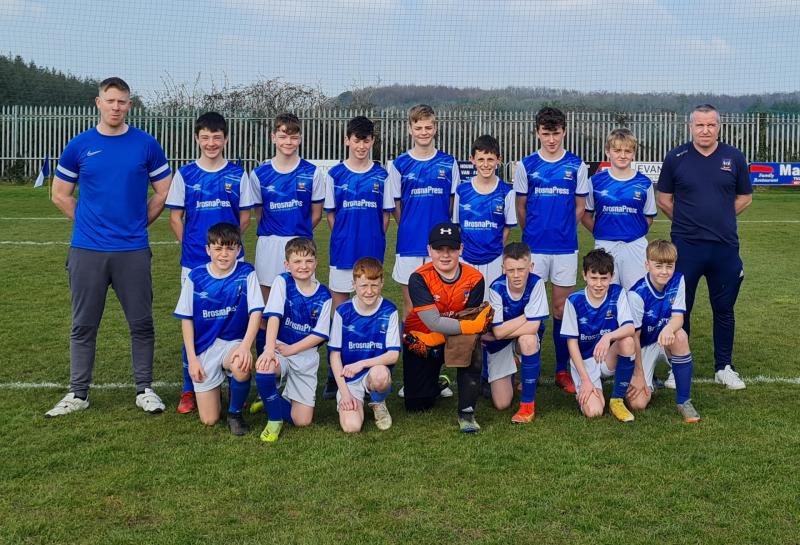 When Tullamore Town’s U13 side started their SFAI National Cup odyssey against Edenderry on a cold, misty day in October, they were one of 371 teams with dreams of reaching the latter stages of competition.

Seven rounds and 43 goals later, with (unbelieveably) only one goal conceded, they have reached the last four of the most prestigious national competition in Ireland at this age. On Sunday last, 27th March Tullamore produced another dominant performance to advance to the semi-finals at the expense of Bohemians of Waterford on a 4-0 scoreline.

The sun shone down on Leah Victoria Park as the two teams lined out for the lunchtime kick-off, the away side having made the long trip from the sunny South East. Straight from the off Bohemians went on the attack, worked the ball to edge of the Tullamore box where their striker unleashed a drive heading for the bottom corner. Ben Boland, Tullamore’s superb goalkeeper, dived smartly to his right and got hands and body behind the ball to save a certain goal. An early stop like that can have a big impact on both the keeper and his team and for Boland it was the first save in an impressively confident display. It helped settle Tullamore who knew they were in a game, but would start to find inroads past the Waterford side. Mark Monaghan has been terrorising defences all year with his power and pace, and he soon started to find his way past the full back. On 10 minutes he got to the byeline and whipped in a cross that the keeper could only push out to the edge of the box where Dara Waldron unleashed a drive into the roof of the net. Tullamore had been sweating on Waldron’s availability all morning after a bout of illness, but he showed no ill effects as he took his chance.

As the half wore on Bohemians started to get a foothold in the game and a period of sustained pressure on the Tullamore defence tested the back four. Ronan Guinan, captaining the side, marshalled the backs superbly all day, with Adam Malone alongside forming a calm and controlled pairing, Steven Murrihy moving the ball swiftly from defence to attack, with Thomas Carroll snapping on the heels of his man anytime the ball came near him. They are a formidable back four, with a goalie behind them constantly communicating with them. Murrihy is always able to pick out Monaghan on the right and likewise Thomas Carroll linking superbly with Dara Waldron.

Jamie Harvey and Calan Kinnarney worked hard to get Tullamore back on top in what was becoming a midfield battle with Scott Halloran ahead of them in the number ten role a constant threat. Adam Martin has been transformed over the course of the season from a winger into a powerful striker and he was proving a real handful for the Waterford centrebacks. Tullamore almost got a second goal just before half time when a Mark Monaghan cross resulted in a goalmouth scramble before Calan Kinnarney fired wide. The game was still finely balanced at 1-0 when the ref blew for half time. A referee is usually only mentioned for controversial decisions, but Martin Kelly gave a display of top class refereeing throughout, constantly talking to the players and keeping control.

This Tullamore team has made a habit of bursting out of the traps in the second half, and with the half time team talk still ringing in their ears, Scott Halloran fired a vicious shot which the Bohemians keeper couldn’t hold onto, and Dara Waldron reacted quickest to the loose ball to score his second. Three minutes later Thomas Carroll and Waldron combined to get the ball to Halloran on the left hand corner of the box, from where he curled a beautiful effort just over the bar. They didn’t have to wait long for a third with Jamie Harvey winning the ball in midfield and splitting the two centre backs with a precise ball for his midfield partner Calan Kinnarney to burst onto, and calmly slot the ball past the keeper.

Odhran Gilmartin was introduced for Dara Waldron and immediately began to impose himself on the Waterford left back. Tullamore Town were now in full control and were dictating the game. A corner from Mark Monaghan was met by the head of Kinnarney and the ball flew just over the bar. Scott Halloran was now dominating the attacking third and when he found himself in the box he had the skill to beat his man but fired just wide with his left foot. Bohemians continued to pose a threat on the counter attack, but again the Tullamore back four held firm, with Adam Keegan having slotted into the left back position, using his physicality very well along with his expert long throws launching Tullamore back up the field.

With 12 minutes to go Ben Boland made a save from a Waterford attack and immediately picked out Jamie Harvey in midfield who spotted Mark Monaghan, Harvey played the ball over the top and following a mix-up between the goalie and centreback, Monaghan found the ball at his feet and swept it into the empty net for 4-0. Fionn Kane’s introduction for the final quarter was not going to make things any easier for Bohs, as he terrorised their backs and came within a whisker of scoring from just inside the six yard box. Tullamore have such strong options in defence, midfield and attack, the switches are seamless.

In the end Tullamore ran out comfortable winners, playing sharp, precise, controlled football. That is a credit to the players but also to their coaching team of Patrick Murrihy and Jason Halloran, who have moulded this side over the past five years and have brought them to this level. You can see that these young lads love their football, and they are certainly enjoying this unique cup run. After the final whistle, the enormity of their achievement began to hit home. A place amongst the last four of the National Cup. A trip south awaits as they face top Cork side Midleton FC next, while East Meath Utd and Shamrock Rovers face off in the other semi final. Whatever the outcome of that tie, these boys have already written their own little piece of history.