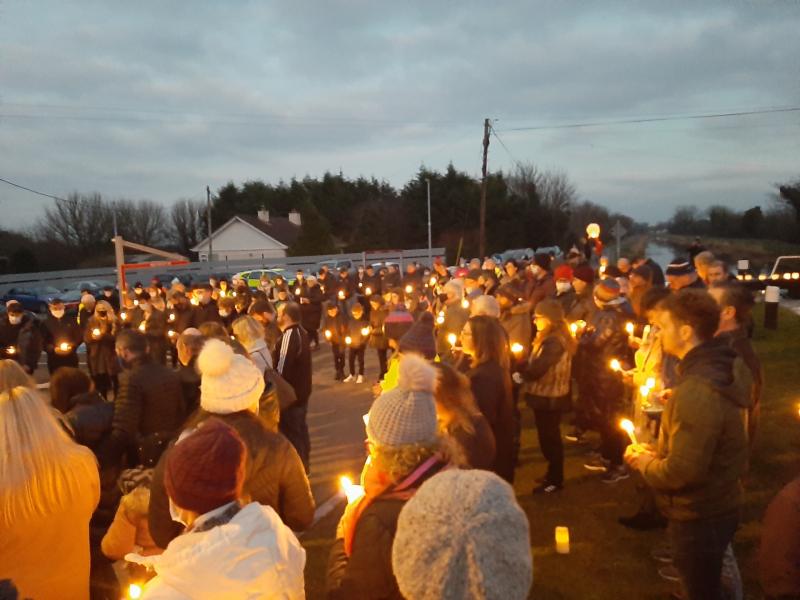 IN an emotional vigil at the Grand Canal, Cappincur this evening, Ray Murphy played the banjo as his daughter Ashling's favourite song 'Sweet Sixteen' was sung.

Hundreds attended the candlelit vigil and joined in the rosary as Chinese lanterns were released into the darkened sky in memory of the murdered 23-year-old.

The vigil took place at Digby Bridge on the canal, very close to the crime scene where Ashling's life was taken on Wednesday afternoon.

Ray Murphy was joined by his bandmates from Best Foot Forward for a touching performance of the song and local priests Fr Patrick O'Byrne and Fr Declan Thompson led prayers for the grieving family.

Local woman Mary Daly decided that Cappincur should host its own vigil to show solidarity with the family and the GAA club quickly organised the event.

Ms Daly said she was delighted that Ray, his wife Kathleen and their two surviving children Cathal and Amy could see that the community supported them.

“It was lovely. We feel honoured to have the family out here, we really do, in their hour of need,” said Ms Daly.

Another local resident, Brendan Killeavy, a former Sinn Fein councillor, said everybody felt for the family because so many people have young children and sisters of their own.

“It's a terrible tragedy for the area, such a nice area for people to come to walk, to run, to socialise together, to think that this could happen so close to home,” said Mr Killeavy.

“The reason people come to vigils is because that is all we can really do at times like this to show solidarity with the family. Ashling was such a young woman with her whole life ahead, and she had her life taken in such circumstances.

“For the family to be here and see so many people it might be some comfort for them over the coming weeks and months and that will be much needed for them.”