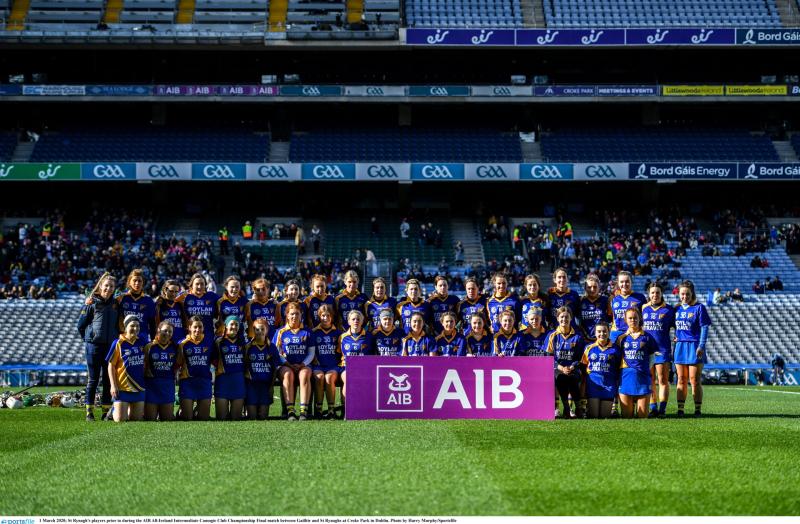 The St Rynagh's team that was beaten by Gailtir in the 2019 final.

ST Rynagh's will have a big date with destiny when they travel to Thurles to take on Waterford champions Gailtir in the 2020 All-Ireland Camogie Club Intermediate Championship Final this Saturday, January 8.

The dominant force in Offaly camogie in recent years, the Banagher based club will be aiming to win an All-Ireland title for the first time. A win on Saturday will be the crowning glory of a great era for the club, their best and most successful ever. They have won five Offaly senior camogie titles in a row, three Leinster intermediates and they need an All-Ireland to complete the collection of medals.

They come up against familiar opponents in Gailtir. The Waterford side denied them an All-Ireland title in the 2019 final in absolutely hearthbreaking circumstances. Gailtir got a last minute goal to win by 1-13 to 0-13 and an absolutely devastated St Rynagh's side had no time to recover. They had been a point up almost at the end and had victory snatched from their grasp.

St Rynagh's had also lost to Gailtir in the 2018 All-Ireland semi-final and they will be hoping to make it third time lucky this weekend. For them, however, the incentive is not to get revenge against Gailtir but to win an All-Ireland title.

Their manager Mark Dunne was asked this week about the incentive of playing opposition who have inflicted so much trauma on them.

“I don't think the opposition is the biggest event, getting to the final and winning it is the main goal. It is not a surprise that Gailtir is there. This is their third final in a row and they had a serious win over Clarinbridge in the All-Ireland semi-final. The two best teams in it are there. Beating Gailtir is not the main thing, the incentive is to try and get over the line, to win this.”

From Meelick-Eyrecourt in Galway, just across the Shannon from Banagher, Dunne is in his third year as the St Rynagh's manager and he was in his first season when they suffered that devastating All-Ireland defeat against Gailtir.

It has been a roller coaster journey for St Rynagh's, who were among the clubs who reacted furiously after the Camogie Association initially decided to abandon the 2020 provincial and All-Ireland club championships in the middle of last year. The championships had been delayed because of Covid-19 shutdowns but Rynagh's and other clubs had been preparing in the expectation that they would go ahead when it was decided to cancel them.

Several clubs sent an angry letter to Camogie Association headquarters, forcing a rethink and Mark Dunne is delighted that they got this opportunity. “If it was the same as hurling and it was decided at the start there would be no club championship, no one would have any arguments but it was fixed. It would have been different if we were told last Christmas that it was off but it was June when it was called off. It was very unfair. We had trained for six months at that stage.”

It has resulted in a very busy schedule for St Rynagh's. Even now, there is the scope for one replay before the 2021 Leinster championships get underway and Dunne commented: “Some girls have been going basically non stop for two years but they don't mind as long as we are winning. When you are winning and enjoying it, you will play seven days a week. It does take a bit of give and take. It is mentally draining.

“Right through Leinster, we played a game each week and recovered midweek. It was game, recover, game. We also toured the country, we had no game at home. We were in Wexford, Carlow and Clane in Leinster and we played the All-Ireland semi-final in Cavan. It is hard going. Girls are getting home from college on a Friday evening and gone all day Saturday. They are not back until late in the evening. It is uncharted territory. There was really no shutdown period. Everyone is extremely busy but everyone counts themselves very lucky. We could win two All-Ireland's in three months.”

Now, with the All-Ireland final on the horizon, the Covid-19 surge has stepped into their vision again. “We have had our fair share of it. The last week and a half has been very tricky. We were down half of our panel in isolation, through close contacts or having it. A large amount were back this weekend and some will only be out the day before the game. Our training was interrupted but it was the same for everyone. It is a complete unknown. Girls are isolating even if they don't have it or are contacts. They are staying at home and going training. They are going nowhere else. The fact that so many were isolating was a help. They were nowhere to pick it up. We know the final has to go ahead unless there is a mass outbreak. Everyone is taking responsibility and we are hoping for the rub of the green. We could have everything planned and then next Friday or Saturday be hit with something.”

They availed of the three week break in games to recharge their batteries and have downtime over the festive season – taking four days off at Christmas and another few for the new year. “Our biggest thing is to try and keep everyone safe. We didn't do as much as we would have liked but we are still happy with what we done. Everyone is healthy at the moment and even the girls who got Covid were able to do a bit on their own.”

While St Rynagh's have now won five Offaly senior titles in a row, Dunne stressed that the opposition here prepared them for provincial fare. “The Offaly championshop will have you prepared for Leinster. Shinrone, Birr and St Cillian's are particularly competitive. The margin between them and St Rynagh's on any day is not a whole lot. The Offaly championship is very competitive.

“We want this All-Ireland. We have won five in Offaly, three Leinsters and this is the one hurdle we have yet to get over. It is the one to add to our collection. Thurles is a great venue for it. If we win that, we will have a very happy community.”

Dunne was asked if St Rynagh's success in hurling has a positive spin off for camogie. “The way, the club is run is excellent. A lot are going down the road of amalgamating GAA and camogie into one club. We are separate but the facilities are shared, it is completely equal. The GAA own it but anything we want is available. Ladies football, camogie and the GAA have put a GPO (Games Promotion Officer) into the schools. It is a very successful time for St Rynagh's. Two years ago, St Rynagh's won senior hurling, intermediate football, senior camogie and intermediate ladies football. There is a lot of proactive stuff. It is two clubs but it is really one club, there is no difference. It is unbelievable really. Whatever we want, we get it and they are so accommodating to us.”