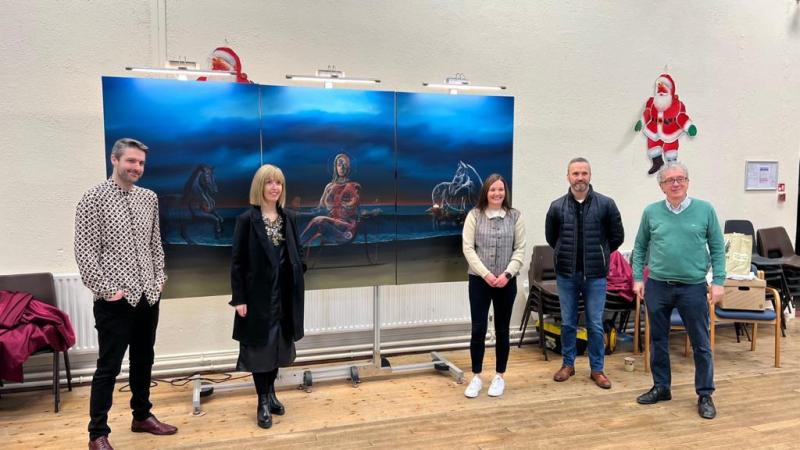 Vincent Devine (extreme left), with Vicky Phelan, Alicia and David Brennan, and Billy Keane at the launch in Mooncoin

OFFALY artist Vincent Devine said Vicky Phelan was in “good form” when he met her at the unveiling of his portrait of her in her home county of Kilkenny on Sunday.

Ms Phelan, the terminally ill woman who became a household name after her High Court action brought the CervicalCheck controversy to public notice finally had time to discuss Mr Devine's depiction of her at an event in the community hall in Mooncoin.

“This had been put off because of Covid for months and months and I had never stood in front of that finished painting with her,” said Mr Devine.

Ms Phelan had been in the United States undergoing treatment in what proved to be her last effort to find a cancer cure.

“I hadn't spoken to her at all since she came back from America so it was great to be there with her and talk her through it.”

The Clara-born painter had spent many hours speaking and sitting with Ms Phelan when he was working on the painting and they got to know each other very well.

The painting was then auctioned for charity through Sheppard's auction house, raising about €46,000 for Heroes Aid, which supports frontline health service workers battling Covid-19.

Though she had a brief opportunity to view the painting when it was featured on the Late Late Show last year, the Mooncoin event was the first time Ms Phelan had a chance to consider its meaning carefully.

“She was just floored by it,” said Mr Devine.

The painting was bought by Mooncoin couple David and Alicia Brennan. David Brennan is a longtime friend and neighbour of Vicky's family, the Kellys, and Vicky's parents, John and Gaby Kelly were present at the unveiling along with wellwishers from the local community.

Kerry writer Billy Keane officially launched the painting, saying it was going to “change lives” and “save lives” when it reaches a wider audience.

It is currently on display at the Solas Cancer Support Centre in Waterford. “The plan is to move it around the country and it could go international as well,” said Mr Devine.

“I can't wait to get it back to Tullamore.”

His portraits have been lauded by stars such as Shakira, Will.I.Am, Alanis Morissette and JK Rowling.

Mr Devine was chosen to paint Vicky Phelan because one of his clients is Mary Leahy, the founder and chief executive of Heroes Aid.

He finished the triptych at his studio on Church Road in Tullamore, where he has also opened a public gallery.

“The more people get to see it the more awareness will be raised of the importance of people checking themselves for all types of cancer, men as well as women,” said the painter.