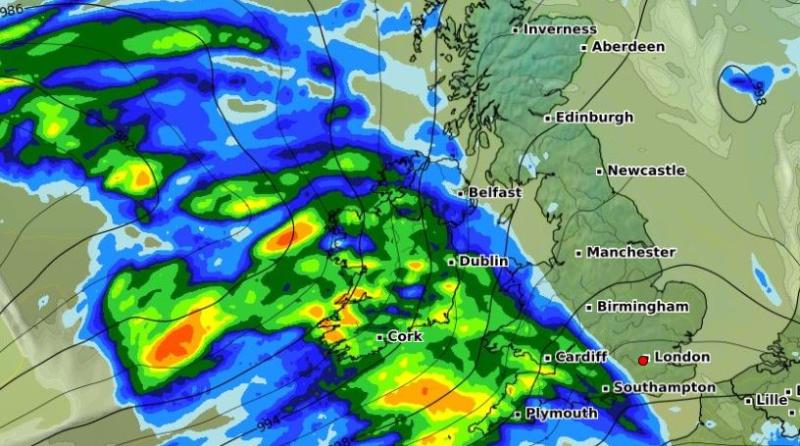 Met Eireann has put Ireland on alert for heavy rain and potential flooding this week.

In a Weather Advisory, Met Eireann says that this week across Ireland from Monday night onwards, spells of rain, which will be heavy at times, coupled with already saturated soils, may lead to localised flooding.

According to Met Eireann, early tonight, most areas will be cloudy with patchy light rain, drizzle and mist. Rain will become more persistent overnight and it will turn blustery with fresh to strong westerly winds developing. Clearer conditions with scattered showers will move into southern areas later. Lowest temperatures of 3 to 7 degrees.

The latest forecast for Tuesday is for the weather to be wet in many areas to begin on Tuesday but it will be drier in the south and southwest with just scattered showers. The rain will gradually clear eastwards through the morning, leaving sunny spells and isolated showers by the afternoon. It will be blustery in the morning with fresh to strong westerly winds, but they will ease through the afternoon, becoming light and variable by evening. Highest temperatures of 7 to 11 degrees.

Households are to be offered financial assistance after Christmas Day flooding

Rain will develop in the southwest early on Tuesday night and will extend northeastwards across the country overnight, turning heavy at times and giving a risk of localised flooding. Lowest temperatures of 0 to 7 degrees, coldest in the north early in the night. Light southerly winds will increase moderate to fresh.

According to Met Eireann, Wednesday morning will be wet and breezy with some heavy falls of rain in places, along with fresh and gusty westerly winds. The rain will gradually clear northeastwards through the morning and will be followed by dry weather with sunny spells and lighter winds. However, cloud will build from the south as the day goes on and patchy rain will move into southern areas during the evening. It will be very mild for the time of year with highest temperatures of 11 to 14 degrees.

Mostly cloudy on Wednesday night with scattered light rain and drizzle, becoming isolated later. Staying mild with temperatures only falling to between 8 and 12 degrees, with light to moderate south to southwest winds.

Thursday will be cloudy, wet and breezy. A band of rain will move northwards over the country and will be heavy at times giving a risk of localised flooding. The rain will be accompanied by fresh to strong southerly winds. It will be mild again with afternoon temperatures of 10 to 13 degrees.

Thursday night will be breezy or windy with fresh to strong and gusty south to southwest winds. There will be widespread rain or heavy showers early in the night but drier and clearer conditions will gradually spread from the south as the night progresses and winds will decrease too. There will be little change in temperatures from day to night, staying around 9 to 12 degrees.

According to Met Eireann, Friday will be dry and bright to start the day but more rain will move in from the Atlantic during the afternoon and evening, turning heavy at times. It will become breezy again too as fresh southerly winds develop. Highest afternoon temperatures of 9 to 13 degrees.