Tullamore climb to third place with clutch win in Bruff 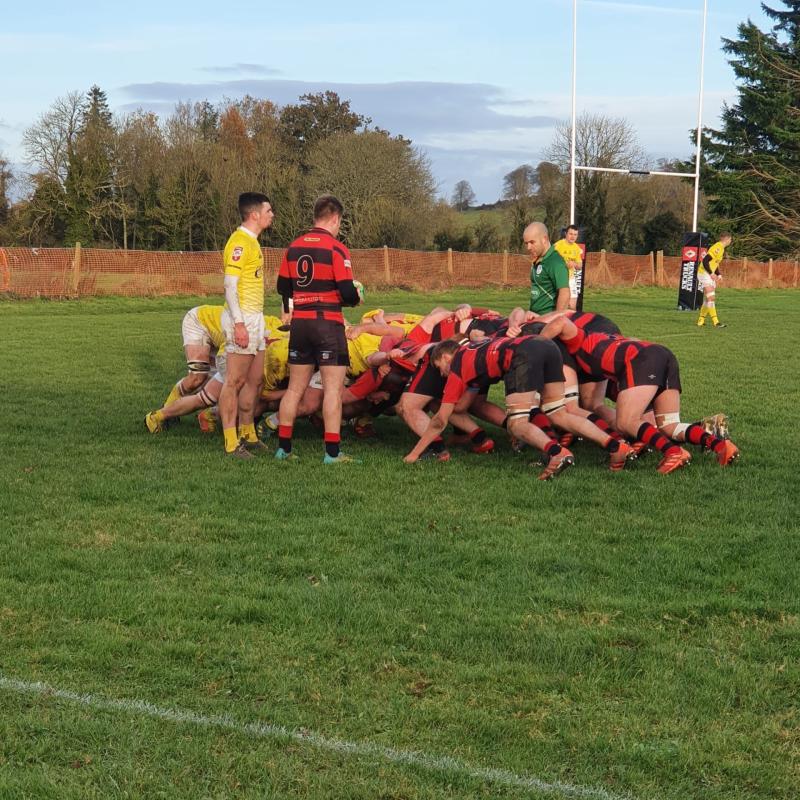 Tullamore climbed one place to third in the All Ireland league over the weekend after a narrow win against a dogged Bruff side.

Tullamore climbed one place to third in the All Ireland league over the weekend after a narrow win against a dogged Bruff side.

On a bright and chilly day, the visitors opted to play against the strong breeze in the first half. The home side immediately hit the front foot with some dominant carrying and determination. The Tullamore line was breached soon after when a well executed line out maul brought the attack just yards away from the line. The  Bruff inside centre then burrowed his way through the Tulliers defence to score the first try of the game. The score was converted and a penalty soon followed to leave the score at 10-0 with as many minutes on the clock.

Tullamore were stunned at this point and had barely touched the ball in this period. The visitors eventually settled and began to build phases through Mike Tormey, Barry Bracken and Christopher Whittle. The side worked their way into the danger zone when the ball made its way out to Conor Dunne, who cooly drew in the defence before whipping the ball to Liam Farrell who glided to the corner flag for a lovely score.

Soon after this Tullamore had another line out on the Bruff 22. A smart trick play from the attacking line out was scuffled by the defence and the ball bobbled toward the touch line. Craig Strong picked up the ball and managed to evade two defenders before getting caught just before the try line. He then composed himself and popped the ball to the oncoming Brian Geraghty who dotted down for the teams second try of the contest.

Tullamore were in the ascendency at this point, and had another chance to convert minutes later when a strike play from a scrum opened up the Bruff defence. Unfortunately the ball was mishandled and Bruff worked their way back down the pitch to earn a penalty of their own. It was converted to leave the halftime score at 13-10.

The game became a one sided affair in the second half. Tullamore had the wind at their back and had the lion’s share of possession but scuppered chances to move ahead on the score board. The Tulliers scrum once again dominated and churned penalty after penalty for the men in red and black. The penultimate score came on the 77th minute, when Tullamore were awarded a penalty on the ten metre line. Conor Dunne stepped up and nailed the place kick to level the score. From the restart, Ciaran Ennis jumped into the clouds and plucked the ball to set up another attack for the visitors. The side built their way into the 22 again, and earned another penalty on the 15. Conor Dunne bisected the posts with a high pressure kick to send Tullamore into the lead for the first time in the game.

Tullamore then saw themselves holding out a 21 phase attack by Bruff to finish off the contest. Cathal Behan made some notable hard hitting chop tackles during this period and Tullamore breathed a sigh of relief. The final score was 16-13.

In truth the score didn’t reflect the tale of the game, but nonetheless Tullamore will be delighted to come away with the coveted 4 points. Leon Fox, Jonah Mealliffe and Chris Whittle all had strong performances in the pack, while Sam Burns, Craig Strong and Conor Dunne all excelled in the back line.

Tullamore will now welcome Clonmel to Spollenstown on the 4th of December at 2.30. Skerries and Enniscorthy are the only teams ahead of Tullamore but both sides are 8 and 10 points ahead respectively. If Tullamore can keep their winning form up they should claw closer to the league leaders.