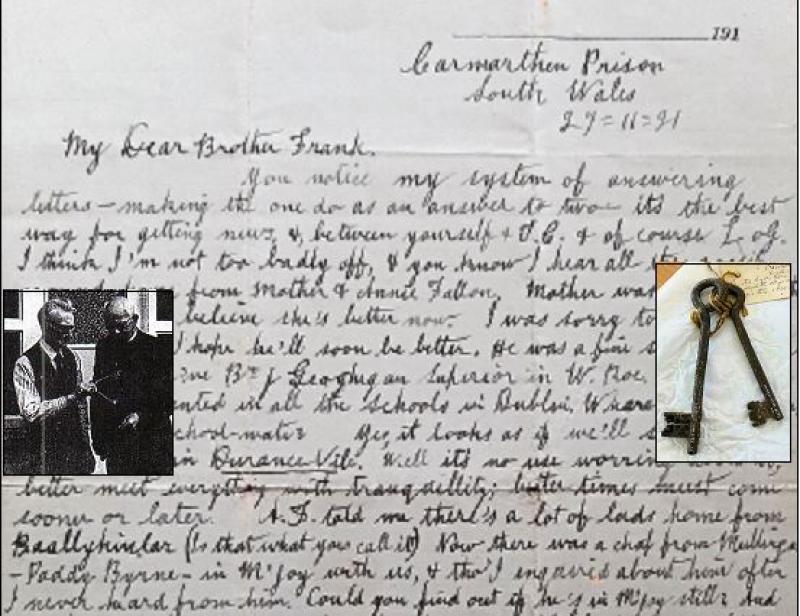 ON this day 100 years ago, November 27, 1921, John Keegan from Ballinagore, Kilbeggan put pen to paper in Carmarthen prison, Wales.

The prisoner wrote two letters – one to his brother, Br Frank Keegan, a Christian Brother, and another to his cousin Tom Cowley.

“Yes it looks like we’ll spend this [Christmas] also in Durance Vile. Well it's no use worrying about it, better meet everthing with tranquility, better times must come sooner or later,” he wrote to his brother.

Referring to the ongoing talks with the British Government, he told his cousin: “Well, the conference is still going on apparently we were just as near a settlement in July as we are now.”

He added: “It is disappointing things are so slow – at least it is to us, but it looks as if there'll be no more fighting when the Internees are being released. I had hoped that when the truce was signed we'd at least get political treatment, and I had hoped also that we criminals (word 'criminals' underlined) would be released whenever internees would be released, but apparently I'm hoping against hope.”

John Keegan, a blacksmith and member of the Irish Volunteers who was born in 1895, had been caught 13 months earlier with a revolver by the RIC near Ballinagore, Co Westmeath.

He was arrested on October 27, 1920, sentenced to two years of hard labour with remission of three months, and shipped to Carmarthen via Wormwood Scrubs prison in London.

Records of his involvement in the IRA are kept by one of his grandsons, Tom Keegan, and they refer to his active service in the attack on the RIC barracks in Clara and an attempted attack on Black and Tans in Monaghanstown, near Castletown-Geoghegan, Co Westmeath.

John Keegan brought bombs to Ballinacarrigy for a planned attack on the barracks there on February 2, 1920 and on April 3 the same year, he was on sentry duty at the customs and excise office at the county hall in Mullingar where the IRA were destroying documents.

He also recorded details of the raid on Mullingar railway station on June 29, 1920 where the Volunteers punctured drums of petrol destined for the RAF aerodrome in Oranmore, Co Galway.

His luck ran out four months later and the circumstances leading to his incarceration are detailed in extensive police and military documents, retrieved by this writer in November, 2020.

A summary of the evidence prepared by RIC Constable Edward Churchill reveals how the police were searching the Castletown-Geoghegan area at about 9pm on October 27, 1920 when they came upon John Keegan and another man.

The police were led by Captain VD Corbett, district inspector at Kilbeggan RIC barracks and the written report before the civilian court martial said: “I saw accused (identified) with another man approaching us. I called on them to halt. I was searching accused when he broke away. I followed him [and] took him by the coat.”

In a dramatic moment, the constable said he then saw the man draw his right hand across his body and said to the other police: “This man is trying to shoot”. “A fellow constable came up and held the accused with his rifle.”

That “fellow constable” was named as EA Chandler and a search was carried out by G Wilson.

The police said they seized a five-chambered revolver and four rounds of live ammunition and Constable Churchill notes Keegan saying: “I did not mean to shoot. I wanted to throw the revolver away.”

An empty round case was also found and according to the RIC driver at the time of the arrest, named in court documents as G Vivian, it “smelt of cordite and had been fired”. Vivian's evidence was that while two constables were holding Keegan's arms he reached into his coat pocket and found the gun and rounds.

With John Keegan arrested, the police continued by searching his homeplace at Derryroe, Balllinagore at about 10.15pm and Constable PR Jack said he found a revolver holster under a pillow, along with more ammunition.

Keegan's three brothers, Patrick, Joseph and Bernard Keegan, were also held on suspicion of possession of ammunition and there are documents from the authorities at General Headquarters in Dublin dated up to February 4, 1921 where a lieutenant colonel is writing to the infantry brigade in Athlone enquiring about their case. The three men were released.

Following his detention by the Leicestershire Regiment in Athlone, on November 12, 1920, Keegan was convicted of having firearms which were not under effective military control. The court documents indicate he said that as an Irish Volunteer “he was entitled to carry arms”. He declined to cross examine any of the prosecution witnesses.

The sentence handed down, he was moved to Mountjoy first and then to Wormwood Scrubs before joining other IRA detainees in Carmarthen.

As his letters home indicate, he was unhappy at being designated a “criminal” and longed to return from a prison he described as “Hotel De Carmarthen” in one letter and “Durance (perhaps a play on the word 'endurance') Vile” in another. At the same time however, he was using his blacksmith skills to plot an escape.

A warden had broken a master key for the outer doors and Keegan, who was labouring in the prison workshop, offered to repair it. While doing so, he made a copy. He also studied the governor's master key for the cells and made a duplicate.

According to Kilmainham Gaol Museum, Dublin, where the keys are kept, his release on the general amnesty in 1922 meant he never used the keys but he did hide them in his shoes when leaving.

In his letter to his brother Frank in October 1921 he concluded with the words “hoping it wont [sic] be long until I see you again in old Dublin”.

His wish was granted on January 13, 1922 following his release.

The family believe that five years later he returned to the prison as a visitor, tried one of the keys and was delighted to find that it worked.

The keys, which are not yet on public display, were recently released for inspection by John Keegan's daughter, Sr Theresa Keegan, a resident of a nursing home in Chapelizod.

John Keegan married Bridget Daly, a widowed mother of one, and had eight children, four of whom entered religious life like his brother Frank.  Two of his daughters became nuns, one son, Tom, joined the priesthood and lived in Australia, and another son Frank became a Christian Brother in Dublin.  Another son, Sean, was a Fianna Fail TD for Longford/Westmeath between 1977 and 1982, while two daughters, Dill and Bridie, married and lived in Co Westmeath, and another daughter, Ita, married and lived in Dublin.  He died in 1976 at the age of 81 and was buried in Horseleap cemetery with military honours. Along with his daughter Sr Theresa, formerly of Rome and Florence, he is survived by another daughter, Sr Gemma, Sisters of Mercy, Tullamore, and formerly of Kilcormac.  His grandson Gearoid Keegan is Deputy Editor of the Tullamore Tribune.