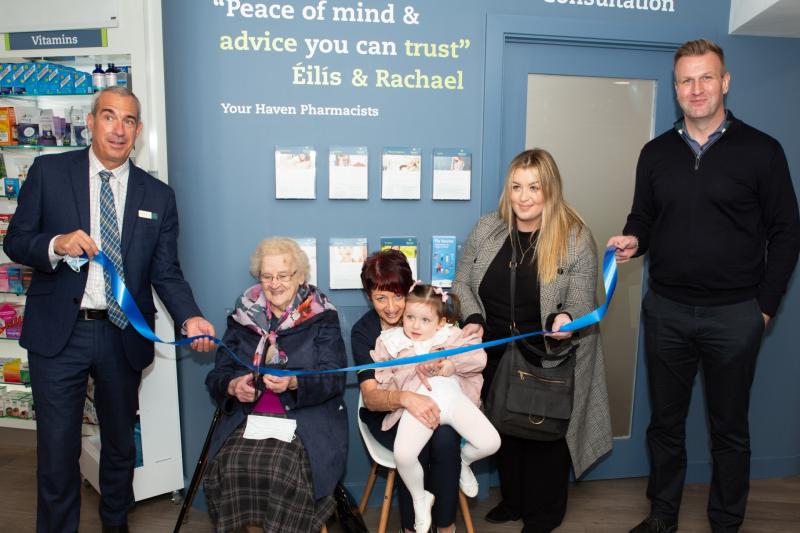 FOR a pharmacy which has given so much for so long to the town of Tullamore and the wider area, it was appropriate that the honour of officially opening its newly revamped store was bestowed on the most senior customer of Haven Pharmacy Fahey's, Margaret Sullivan.

Now 100 years of age, the popular Durrow woman formally cut the ribbon on the Patrick Street premises on Friday, thereby ushering in the latest exciting chapter in the story of a chemist shop which began back in the 1950s when Margaret first walked through its doors.

Now, many decades later, four generations of the Sullivan family are linked with a pharmacy renowned for the quality of its customer service.

Margaret was joined for the opening day of celebration by her daughter-in-law Majella, who is the wife of her son Martin, along with Rachel Sullivan, daughter of Majella, and Rachel's little daughter Lucy McHugh.

Majella is an employee of the pharmacy, and has been for 41 years, a track record of service which attests to the attachment many of the staff feel for a business which is part and parcel of Tullamore's day-to-day commercial and social life.

Speaking after being presented with a bouquet of flowers by the staff, Margaret Sullivan tried to recall her first time in the store.

“I remember coming into this shop when Pat Fahey and his wife owned it,” she said. She thinks it was shortly after Offaly had been defeated in an All-Ireland final by Tipperary (Offaly were beaten in the junior final in 1953).

“I remember coming in here and (Pat) was all chat. He just wanted to talk about the hurling.”

Can she remember what she was buying herself? “I don't know what I wanted. I know I didn't want a lot.”

She said she was a regular customer at Fahey's and before it opened she attended the local Sacred Heart School with the founder Paddy Fahey's wife, Mary Crowley.

When the chemist shop opened in the 1950s she remembers it being “much smaller but it was always a reasonable size”.

“I'd say it was only half what it is now. Time marched on”.

As for her own longevity, she remarked: “I think it comes from my grandfather's people on my mother's side. Some of them did live to 100. But it has to be in the genes, I'd say.”

Thanks to a fit-out which took place during the Covid pandemic, the pharmacy is now a premium destination for all customer needs, from medicines and prescriptions, to beauty products and giftware.

The store founded by the late Paddy Fahey in the 1950s was bought three years ago from his son Paul by Liam Butler, a pharmacist in Birr, and Frank Holly.

“It was about 60 years old when we bought it and that's why it was attractive to us because it was a well established business and it had a super reputation. And it had a super medical reputation because of Paul's other brothers Frank and John (a GP and dentist respectively),” said Liam.

A third generation pharmacist himself, where the family tradition stretches back 80 years, Liam knows the industry better than most.

“There's super competition in Tullamore with lots of pharmacies. All of our medicines are the same, a lot of our products are the same,” he said.

Maria Dunne, who has been working in the pharmacy for over 20 years explained what she believed has been the secret to the shop's success: “Customer loyalty has been built up because of the service and the care that people get here. People remain very loyal to us because we give a very personal expert service.”

Maria is just one of a number of staff who bring vast experience to the pharmacy. Jackie Tyrrell and Majella Sullivan have been there over 40 years, Olga O'Brien over 25 and Theresa Hickey more than 20.

The 12-strong staff are overseen by supervising pharmacist Eilis Ryan and pharmacist Rachael Henry, a Tullamore native. Sandra Mullen, shopfront manager, played a key role in ensuring the revamp went smoothly in very challenging conditions and was responsible for enhancing the pharmacy's excellent offering of products.

“Making this a destination shop was the aim and I think we've achieved that,” she added.
A “destination” store is effectively a one-stop shop which will serve all needs, drawing customers from far and wide and one has only to step over the threshold on Patrick Street to see why this Haven Pharmacy fits the bill.
Among the leading names stocked are NUXE, a French skincare brand, and the La Roche and Vichy Dermacenter along with CeraVe skincare. Makeup brands include award winning Sculpted by Aimee Connolly, Bia Belle Beauty and Catrice. Haven Pharmacy Fahey's is the first in Tullamore to host the newest Dermacenter from Vichy and La Roche Posay which hosts the premium products.
There is also a very definite emphasis on Irish brands and Sandra is delighted to stock wellness brand Ogam, which is a range of essential oils, massage carrier oils, hand sanitiser and diffusers from their Apothecary in Carlingford, Co Louth.

Shoppers will also see the attractive Handmade Soap Company range, the designer inspired Costume Shira Jewellery collection, Irish Botanicals candles and diffusers and Herb Dublin candles and wellness range. Sandra said the pharmacy was always known for its “fantastic” dispensary.
“We wanted to replicate that with the retail offering so we've been bringing in some gorgeous new brands into the shop. We wanted to bring in some new giftware, seasonal gifts and professional haircare products too.”