Belmont hold on to secure crucial win over Kinnitty 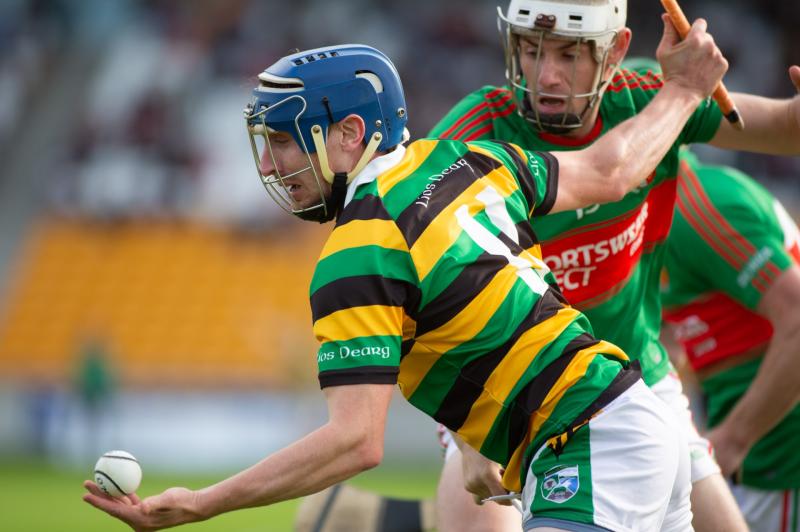 It was nip and tuck the whole game in a tightly contested affair, but Belmont just came out on top in the end with late points from Paddy Clancy and David Nally ensuring they ran out winners. Kinnitty came up just short and were unlucky to be on the losing side. They will be bitterly disappointed in a game which certainly could have gone either way.

The game started at a frantic pace with both sides quickly off the mark. Eoghan O’Callaghan opened the proceedings inside the first minute, but Belmont were quick to respond with a free of their own from David Nally.

Odhran Kealey nudged Kinnitty ahead in the third minute when a wonderfully taken point. Kealey plucked a puck out, turned and shot over the bar. Jack Egan had Belmont level and points from Damien Egan and David Cox put Belmont ahead but three Colm Coughlan points, two from placed balls quickly restored the slight Kinnitty lead.

Points from David Nally and a wonderful Paddy Clancy point where he rose highest to flick a Nally sideline over the bar gave Belmont the lead by the minimum at the first water break.

It was turning into a real shootout in Birr and there was nothing between the sides in the first half. Jack Egan and Paddy Clancy both pointed for Belmont, but Colm Coughlan kept Kinnitty in touch with his frees.

Cathal Flynn got an excellent point just before half time after he raced onto a loose ball and cut inside and fired over but it was a Colm Coughlan free which proved to be the last score of the half, leaving just one point between the two sides at Richie Fitzsimons’ half-time whistle, in favour of the Belmont men.

Colm Coughlan had Kinnitty level within the first minute of the second half with a long-range effort which sailed over the bar. Jack Clancy was introduced as a substitute at half time, and he made his presence known immediately with a wonderful score from out under the stand.

It was a cagey third quarter as both teams were extremely evenly matched and they both struggled to pull away. Scores were at a premium with both sets of players enjoying a high turnover rate.

Brian Donnelly split the posts midway through the third quarter to draw Kinnitty level but David Nally’s free just before the second water break gave Belmont a one-point advantage at the stoppage.

It was obvious that the game would go down to the wire and it was a tense finish. Colm Coughlan did put Kinnitty ahead after the break, but Belmont’s lead was quickly restored through David Nally when he pointed twice from placed balls.

Paddy Clancy came roaring into the game in the closing stages, and he put over two monster scores to increase the Belmont lead.

With two points in it, deep into injury time, Kinnitty threw everything at it. Shane Kinsella went close to raising a green flag, but he was denied by Barry Egan. There were a few long balls sent in on top of the Belmont defence, but to no avail as Kinnitty desperately looked for the net.

It was a grand slam finish and as things got heated on the side-line, it led to a tense atmosphere, but in the end, Kinnitty could not find a goal for themselves as Belmont held on to claim the two points.