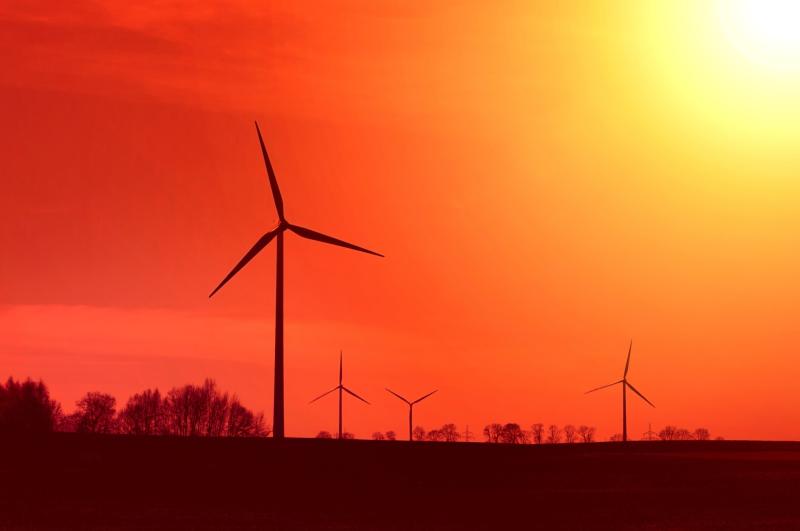 38 wind turbines, with blade tip heights of 185 metres, are planned for West Offaly

A large number of massive wind turbines are being planned for construction on the bogs of West Offaly, despite the objection of many locals.

An Bord Pleanála said it has given a ten year permission for a wind farm consisting of 21 massive wind turbines at Derrinlough and other townlands in Offaly.

The Derrinlough 21 turbine wind farm (with blade tip heights of 185 metres) will be arranged in two clusters across two bog sites, Clongawny Bog to the west of the N62 and Drinagh Bog to the east; both are part of the Boora peat production bog group in Co. Offaly.

Approximately 29.3 km of access road will be constructed within the site including the upgrade of 450m of existing access road.

The news comes hot on the heels of announcement that Bord na Móna is planning to proceed with building 17 huge turbines in the historic area of Lemanaghan despite very strong opposition to the project.

In a statement issued to The Midland Tribune this week, the Lemanaghan Conservation and Heritage Group said it's deeply disappointed with the recommendations in Chief Executive (of Offaly County Council) Anna Marie Delaney's Report on the “Material Alteration Consultation Stage”.

“There were over 2,300 submissions,” commented the Lemanaghan Group's statement, “asking for Lemanaghan Bog to be removed as an area open to consideration for wind energy. This historic number of submissions demonstrated clearly that the opinion of the public should not be brushed under the carpet.”

The group firmly believes that their right to fair, open and transparent public consultation was “severely hindered by mistakes made by Offaly County Council.”

They point out that in phase 1 and phase 2 of the public consultation process on the Draft County Development Plan, the Lemanaghan site, a 1250ha peatland site, was not mentioned at all in the section of the plan devoted to the “Proposed Offaly Wind Energy Strategy.”

“Area 5,” the Group points out, “was described as the area 'North West of Ferbane & West of Doon', which of course does not navigate to Lemanaghan. The description was, geographically, completely incorrect during phase 1 and 2 of the public consultation process.

“The map associated with the document has little detail, no road markings, etc, to help the general public to understand the zoning.”

“In the age of inclusion, it is paramount that each person has the opportunity to understand the document, and that both the map and the text is of a high standard. In the public consultation phases neither the text nor the maps were adequate.
“Also, many people find maps difficult to navigate and would rely solely on text descriptors.”

The Group pointed out that the people of Lemanaghan did not make submissions at earlier rounds of public consultation, because the description of Area 5 did not navigate to Lemanaghan.

“During the 3rd phase of the public consultation process”, the Group continued, “the text in the Draft County Development plan changed to read, 'Area generally west of Doon and North East of Ferbane.' At this stage we understood this to be Lemanaghan Bog and in excess of 2,300 submissions were made.

“The feeling locally is that of frustration, as we did not have an opportunity earlier to make submissions as we did not know the area was zoned for wind energy.

“The Wind Energy Strategy, along with the rest of the plan, had already been made available for two rounds of public consultation but we did not seek changes at that time, because we believed Lemanaghan was not part of the zoning, as the description clearly stated “North West of Ferbane & West of Doon”, which is not Lemanaghan.

“The fact that the council can make a mistake this big, that impacts so many people is unacceptable. Furthermore, when the draft county development plan was changed, to read 'Area generally west of Doon and North East of Ferbane' the council accepted 2,300 submissions, but are now saying that submissions cannot be taken into consideration because they are not 'minor' in nature. If this is the case, then we need to go back to phase 1 public consultation and allow the public to make submissions of a major nature because our right to public consultation was completely compromised. Clearly big mistakes were made here.

“It also raises the question of what constitutes a minor change at this stage of the plan?

“Acting on a requirement from the Office of the Planning Regulator (OPR) to indicate how the Offaly County Development Plan 2021-2027 will contribute to realising overall national targets on renewable energy and climate change mitigation, a target of 466.3MW from wind energy has been recommended by the Council's Chief Executive Anna Marie Delaney. Could this be viewed as a major change at this stage of the draft county development plan? Page 8 of the Draft County Development Plan states that 'In line with the Climate Action Plan 2019, Ireland aims to increase reliance on renewables from 30% to 70% adding up to 8.2 GW of renewable onshore wind energy capacity by 2030. Using Offaly's share of the national population from Census 2016, 1.63% as a proxy, as a minimum County Offaly is required to generate 133.66 MW of renewable energy by 2030.”

A jump from 133.66MW to 466.3MW seems to be a major adjustment to the draft CDP. If this is allowed to be changed, then why can’t the will of 2,300+ people be taken into account? Or what is the point in a public consultation process if the strong public perception is not valued.

“The people of Lemanaghan want a firm statement in the county development plan that this area is off limits for wind energy and that 17 massive wind turbines won't be erected in the area.”