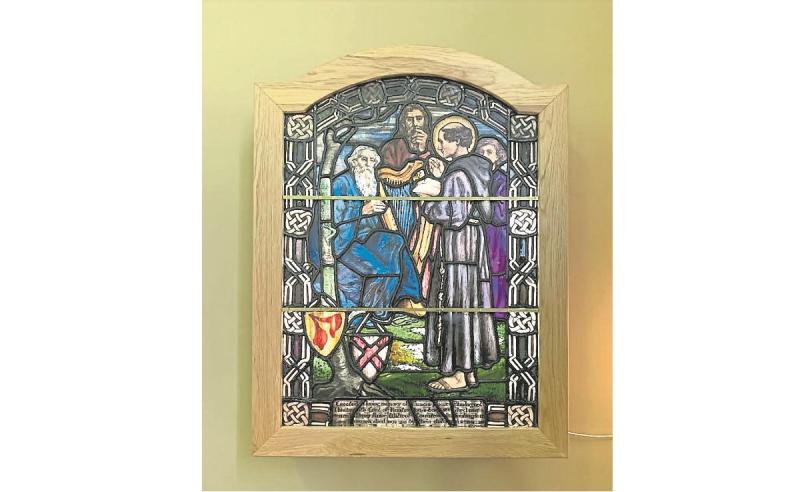 A precious work of art has been unveiled in Offaly.

This beautiful stained glass window by renowned 19th Century artist Mary Lowndes had lain for years gathering dust in an attic in the rectory in nearby Ettagh.

The Shinrone Bicentenary Book Committee decided to do something about this and they had it restored and put on permanent display in St Mary's Church of Ireland Shinrone.

At Saturday's unveiling David Meredith of the committee said the event was community driven and, without the people of Shinrone, there would have been no such event.

He said the committee was formed for the bicentenary of St. Mary’s Church. They published a book last November, which has only 40 copies left of a 500 print run. There were almost 40 contributors from across the community to the book. He gave special thanks to Amanda Pedlow, Offaly Heritage Officer, for her support and guidance throughout both the publication of the book and subsequent conservation of the window.

Sharon Greene, also of the committee, spoke as well. She said she was very happy to see this beautiful work of art, once forgotten, now on display agian. Aishling Stanley, aged 13, recited a poem she had written. Stained glass historian Dr. Richard Kimble spoke of the window's conservation. Rev Charles McCartney led a service of dedication with the The Right Reverend Dr Kenneth Kearon, Bishop of Limerick, Killaloe & Ardfert.

Bishop Kearon marvelled at how both the wider community, parishioners and committee had, in such a short period of time and in the midst of Covid, achieved so much. He reflected on how the bicentenary book had raised awareness and greater appreciation of the community's rich history and deep ties to Shinrone.

Richard Kimble said Reggie Goodbody had made an outstanding display cabinet for the window. He said the conservation of this window was undertaken by Marija Kovac, his colleague and friend. The conservation was based on the principle of 'Primum non nocere' - 'first do no harm.' Dr Kimble pointed out that while the window was fragile, it was fundamentally intact. “The focus of the conservation was on stabilising the window to support its own weight, reseating the lead where needed and replicating two of the Celtic knots in the bottom.”

He said Mary Lowndes was a remarkable woman who became one of the first women to become a professional stained glass artist.

She forged a full-time career for herself when women were normally amateurs, “who might occasionally design windows and even take some part in their execution, but they rarely if ever practiced the whole art independently as a full-time professional occupation”. She trained under Henry Holiday, who was very helpful to her career.

“Samples of Holiday’s exquisite work can be seen not far from here in St. Michael and All the Angels in Abbeyleix. In fact, it is quite possible that Lowndes may have assisted Henry Holiday with this project, as well as with the series of windows by James Powell and Sons, since Lowndes worked for Holiday, and both worked periodically with James Powell and Sons. These windows in Abbeyleix were commissioned by Lady de Vesci, (another notable woman of her time and patron of the arts). Now, since Ettagh is not a million miles away from Abbeyleix, I suspect the commission for Ettagh had something to do with the impression Lowndes may have made on Lady de Vesci.”

The window was commissioned by Warner Hastings, the 15th Earl of Huntingdon, who lived in Sharavogue House, an elegant house which, sadly, was demolished in the mid 1920s after the Earl and Countess of Huntingdon relocated to Leicestershire), and it's possible that Lady de Vesci recommended Mary Lowndes to the 15th Earl.

Apart from Shinrone there is only one other intact Lowndes window in Ireland, in Drumcliff, just outside Ennis.