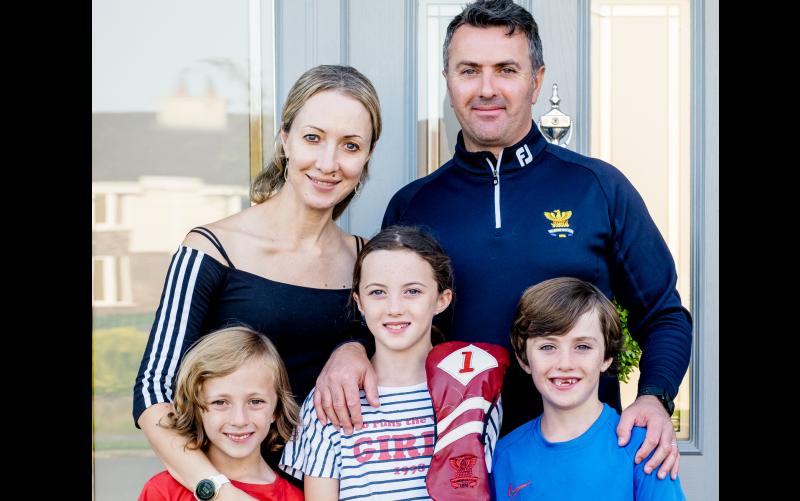 Colin Walsh pictured with his wife Marina and children Aubin, Adelyn and Harvey.

A TULLAMORE golfer has made a great comeback from health problems earlier this year by recording a big win recently.

The series began in March 2020 with golfers playing their home / away Round 1 matches nationwide. The competition was due for completion in November 2020 at La Finca Resort in Spain. However, Covid-19 played havoc with those plans and 17 months later, Colin Walsh was the last man standing.

While the organisers were busy trying to get the series back on track, Colin was enduring his own battle with ill health, undergoing major surgery in March 2021 at St. Vincent’s University Hospital in Dublin. Initially, Colin was under the excellent care of Dr John Doherty and the medical staff at Midland Regional Hospital Tullamore and thereafter the late Enda McDermott Ruth Prichard, Emir Hoti and Dr Rachel Crowley at St Vincent’s University Hospital, Dublin.

Colin hadn’t played golf for an entire eight months when just weeks before the final, he started to ease himself back into the game slowly but surely.

A brilliant athlete with Tullamore Harriers in his youth (he ran for Ireland) and a member of a well known local family, one of the things Colin credits with his recovery was his mental strength and determination to get back to playing golf. Winning the Top Golfer was his ultimate goal, and he was inspirational in overcoming an extremely challenging year. Colin is very grateful for the unwavering support of his family, friends and colleagues at AIB (he works in their mortgage department in Tullamore) throughout and the excellent care of the medical staff at Tullamore General Hospital and St Vincent’s Hospital, Dublin.

Colin’s impressive wins in the series were:

v’s Jack Brown (Heritage) 7/5
v’s John Whelan (Athenry) 1up
v’s Thomas O’Leary (Borris) 5/3
v’s Baden Maher (Killarney) 4/3
v’s Victor Smyth (Castlecomer) 2/1
v’s Stephen Cullen (Tulfarris) 3/2
In the Final at Royal Dublin, Colin played excellent golf on the front 9, shooting level par to be 2up at the turn. On the 10th, it looked like the lead would be cut to 1up, but Colin held his nerve and knocked in a tricky 8-foot par putt. Stephen did manage to birdie the 12th to pull one back, but a steady run of regulation pars for Colin on the back 9 made it very difficult for Stephen and the Tullamore man closed out the win on the 16th.

Speaking after his win to Gary Murphy on the topgolfer.ie vodcast, Walsh said he was delighted and he praised the condition of the Royal Dublin course, noting that it was in “immaculate condition”. Noting that a birdie or par was required to win holes, Walsh said that his ability to hit fairways and greens was instrumental in his win.

He talked about his health issues, stating that he became “very unwell” in December 2020, just after the final of this competition was originally to be played in Spain – it was postponed and then transferred to Ireland because of Covid-19. He went to A and E with a pain in his side, thinking it might be kidney stones but it turned out to be a “bigger” issue and his golf was parked for a few months. “It was a difficult time in my life, a tough time,” he reflected.

He had surgery in March in St Vincent's, which turned out to be a “great success” and getting back on the golf course was an important step in his recovery. “It has been a journey and there is only one way. That is forward. “

He revealed that his mobility was bad for a while after the operation and news of the fixture of this final gave him a goal to aim for. “You need those things in life. You have to aim for stuff and it all came through in the end.”

Walsh set himself a target of getting on the putting green by the middle of June and consultants told him to “get on with his life” on July 2. He asked them about playing golf. “They said you can, it might not be the golf you are used to but get on with it and listen to your body. I did that and did it really well. I was really disciplined, going out hitting maybe 20 balls. They weren't going far, twenty, thirty yards and it went from there.”

He stated that this practice stood to him in Royal Dublin and his “putting saved the day”.

He revealed that his golf game is not as mobile as it was since his recovery. “The turning point of my game came at the end of July. I played two rounds of golf and I had to finish at fourteen because my body wouldn't allow me to.”

He adapted from this, allowing for reduced distance and taking an extra club but hitting it easier as well as choking down on some clubs.
Walsh also talked about his running career, stating that he won a few All-Ireland's and ran a few times for Ireland in cross country and on the track in 3,000m and 5,000m. “There is a competitive streak in me and a stubborness that said let these time lines be right and stick to them. It stood to me in time.”