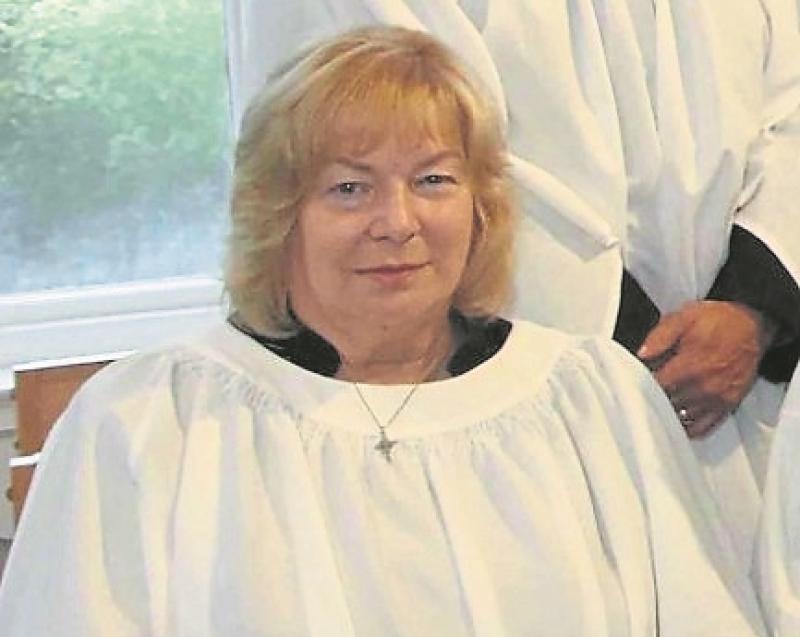 It was a big day for Birr woman Jean Carney recently when she was ordained into the Church of Ireland diaconate in St Flannan's Cathedral, Killaloe.

Bishop Kenneth Kearon officiated and Canon Gillian Wharton gave a thoughtful address about the different roles of a Deacon, roles which range from the theological and cerebral to being practical and at the coalface of society.

A clearly emotional Jean said she had been a teacher in Primary School for thirty years before taking this new career path in her life.

“I retired after thirty years of teaching and set out on this new way,” she remarked. “I think it goes to show that you can follow your dreams and achieve your heart's desire at any age.”

Speaking to The Midland Tribune the day after the ordination she commented, “A fourteen year old girl's dream was finally fulfilled yesterday when I was ordained Deacon by Bishop Kenneth Kearon.”

She recalled her husband, former Archdeacon Wayne Carney, who passed away last summer.

“Wayne was missed, but he was there in spirit with me.”

Jean was joined by family and friends for her big day in St Flannan's and was given a round of applause at the end of the service.

The service could be watched online, lasted ninety minutes and was filled with a lot of beautiful singing. Jean's eventual aim is to become a priest but she has a considerable amount of work and study to do before that particular dream becomes a reality.

She is in her third year of study at CITI (Church of Ireland Theology Institute).

As Deacon she will be serving in the Cloughjordan Group of Parishes under Archdeacon Terry Mitchell (who took over the Archdeacon role after Wayne's passing), while she is completing her dissertation (thesis) for her Masters in Theology.
The dissertation is to be completed by March 2022. If she is aaccepted on the basis of that, then she will able to secure a Curate's position anywhere in Ireland. Then she will be finally “priested” in September 2022.

Canon Gillian Wharton is based in Dublin. She said when a person puts on a priest's collar and a priest's garments for the first time it's a special moment. “But if you begin to get notions about yourself because of your important new roll in society then there will be plenty of people around you ready to bring you quickly back down to earth!”

She said Deacons and Priests are called to follow the example of Christ's ministry which was a ministry that was very practical, deeply in touch with the lower levels of society and with those who were viewed critically by others. Image and reputation were not Christ's concerns. “His first and only concern in his life was love, compassion for others no matter what their status in the world.

“Similarly, the ministry of a Deacon is supposed to be a ministry of compassion, humility and care. It's a ministry where you will often be with people in their moments of pain and suffering, when they are going through throes of grief at the loss of a loved one, or they have received a devastating medical report. Deacons are called to have God at the heart of what they are, to be channels of God's grace and the Holy Spirit.”