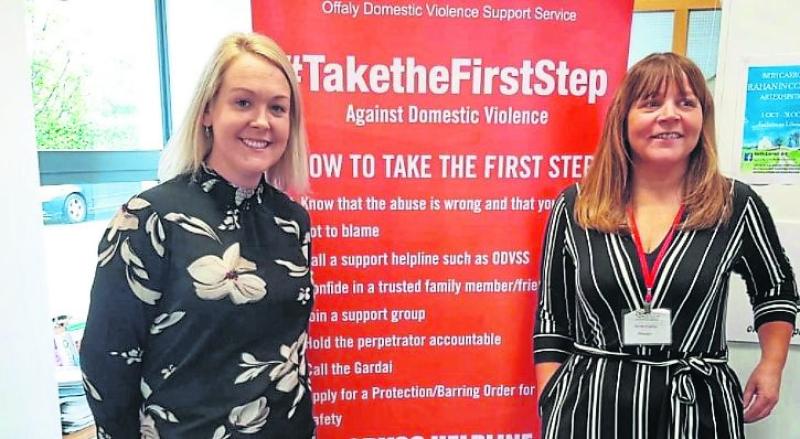 Councillor Clare Claffey and Anne Clarke of ODVSS. Anne said many victims of domestic abuse are from middle and high income families.

There has been a steep rise in the incidents of domestic abuse in Offaly during the restrictions imposed by Covid-19.

“Abusers want to control and dominate the sufferer,” said Anne Clarke Manager of ODVSS, when speaking to the Tribune this week, “and the Covid restrictions gave them the perfect conditions in which to exercise that control. It was a perfect storm for sufferers.”

In 2019 ODVSS received 860 calls. In 2020 the number of calls increased to 1,720.Anne pointed out that on average in Offaly eight to ten people a month are leaving their homes because of domestic abuse and domestic violence.

“We have also introduced a WhatsApp service for victims.”She says ODVSS is based in Cormac Street, Tullamore and was established in 1997, “at a time when there was no support service and there was an enormous need for a service.

Since then we have been carrying the wounds of women on our shoulders.”ODVSS also regularly assists male victims of domestic abuse and works in tandem with Men's Aid.Anne pointed out that Ireland is lagging far behind in the matter of providing places of refuge for victims. In five midland counties (including Offaly) there are only two places of refuge.

“In fact, according to best advice, there should be at least 60 places in the five counties."

Operation Ruby was started in June 2020 to fill this gaping chasm, in conjunction with Airbnb and Safe Ireland. In Operation Ruby victims are accommodated in hotels throughout the region, whose names are undisclosed (for obvious reasons).

On average two victims (from Offaly) a month are accommodated in this way. Since May 2021 four Offaly men and six Offaly women have been accommodated by Operation Ruby.

Another option which ODVSS gives people is a rent supplement scheme. They also supply people with a 24 hour alarm system.There are six people working in ODVSS. They work   hard in normal times but since Covid began it's been especially demanding.

The staff in ODVSS also assist ethnic minority women in the midland counties in overcoming the various barriers that come their way.

Anne pointed out that   victims of domestic abuse come from all economic backgrounds.

“We get a lot of people from middle and high income families coming to us.”

Last year the Councillors of Offaly County Council passed a motion calling for the creation of three safe houses in Offaly, one in each Municipal District.

During a recent Council meeting Cllr Clare Claffey said several months have passed since then and the safe houses haven't been created.

“We need to speed things up,” she said.

ODVSS defines an abusive or violent relationship as one in which one person “has power and control over the other by use of threats or physical violence. Intimidation, frightening actions, emotional, verbal or sexual abuse may also be used to maintain that control.”