Cappincur woman was in contention most of the way 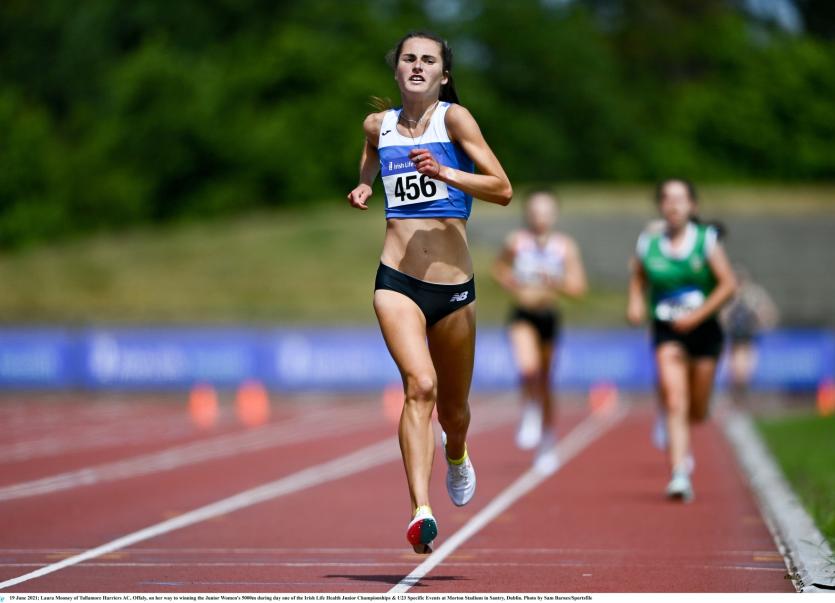 OFFALY athlete Laura Mooney gave a heroic effort as she finished sixth in the European U-20 5,000 metre final this afternoon.

The Cappincur woman was in medal contention for much of the way before falling away a bit inside the last 2km as the winner Carla Dominquez really put on the burners.

Mooney had fought with everything she had as she stayed in the lead bunch for the first 3k plus. Indeed she was third and in a medal position inside the last 2k and was in with a shout of the biggest achievement of her young career.

Competing in the A final, she had done well to get back into contention as Dominquez threaten to spreadeagle the field when she got away just after the half way mark. Her and the other runners worked well as a team to pull her back in but when Dominquez went again, Mooney could not stay with them and the Spaniard looked like winning with 1k to go as she retained control for the last two laps.

It was a brave attempt by Mooney and she will learn a lot from competing in a major championship like this. Irish athletes have performed heroics in these championships in Tallinn and Mooney's performance was very respectable and acceptable.

On an athletics scholarship at Providence College, Rhode Island, Mooney had set a superb personal best and Irish U-20 record for the 5,000 metres when running 16.19.43 in the Virginia Grand Prix in Charlottesville earlier this season.

That time earned her a place alongside the best U-20 runners in Europe in the A final. While she will be disappointed that her time was 12 seconds outside her personal best, she will be pleased that it was better than the winning time in the B final – that was won by Switzerland's Livia Wespe in 16.41.98.

Coming sixth out of sixteen athletes was a very good performance and Mooney's personal best was the fourth fastest of the runners on the start line. She has progressed through the juvenile ranks at Tullamore Harriers and her running has moved to another level in the past couple of years, resulting in her scholarship to the USA.

Mooney's Tullamore Harriers' colleague, Ava O'Connor, from Emo in Laois, had finished 13th in her 1,500 metre heat at the championships earlier in the week.