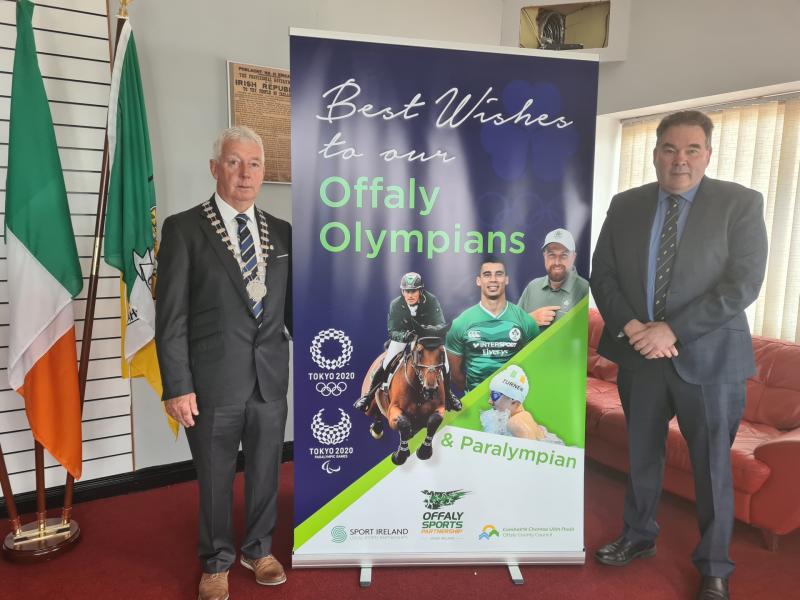 “We all need to get behind our Olympians as they head off to Tokyo to represent our country with pride”.

That was the message from Councillor Declan Harvey, Cathaoirleach of Offaly Council. Leading good wishes to the Tokyo bound Olympians and Paralympian, Councillor Harvey said that this is the largest contingent ever from Offaly to compete at an Olympic Games.

Four competitors from Offaly will represent Ireland at the Olympics and Paralympics later in July and August. Clara golfer, Shane Lowry, teams up with playing partner Rory McIlroy in the golf. Tullamore rugby player, Jordan Conroy, has been instrumental in the Irish 7s rugby team gaining qualification and Darragh Kenny from Belmount will be among Ireland’s leading performers in showing jumping.

In the Paralympics, 19-year old Nicole Turner from Garryhinch will compete in four individual swimming disciplines in her second Paralympic Games.

“Being an Olympian is the pinnacle of sport achievement”, said Councillor McDermott. “It is what childhood dreams are made of. I would like to wish our Offaly Olympians the best of success in Tokyo. We are all very proud of you”.

In addition to the four competitors from the county, Co. Offaly will have a further presence at the Games in the persons of James Nolan and John Cronin.

Nolan who competed at the Olympics in 2000 and 2004, will manage the Irish Paralympic Athletics team for his third Games. John Cronin, who was elected president of Athletics Ireland earlier in the year will be among the athletic officials and adjudicators in Tokyo.