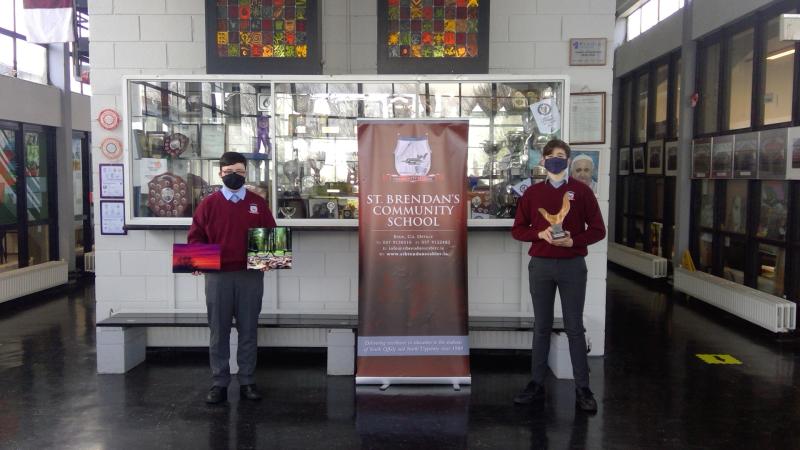 Two Offaly students have won a top award at the National Final of the Student Enterprise Programme.

Students from St. Brendan’s Community School in Birr have won the Natasha Lynch Commemorative Award for Excellence in Social Media award at the National Final of this year’s Student Enterprise Programme.

The Finals of the Local Enterprise Office initiative were broadcast virtually on Friday from Croke Park with An Tánaiste Leo Varadkar and Ambassador Derval O’Rourke speaking with host RTE’s Rick O’Shea, as students and teachers watched on from across the country.

Supported by Local Enterprise Office Offaly, the students won the inaugural Natasha Lynch Commemorative Award for Excellence in Social Media award. The winning students were: Damien Delaney and Alex Byrne, who worked under the guidance of their teacher, John McIntyre. Their student enterprise was called: ‘Hology Photography’ which is a photography business selling pictures framed, unframed and on canvas of the local area and more. They also plan to become a service provider taking pictures in the local area and expanding to even more products when Covid-19 restrictions are eased.

There were 72 student enterprises competing in this year’s National Final in what is Ireland’s largest entrepreneurship programme for second level students. The initiative, funded by the Government of Ireland through Enterprise Ireland and delivered by the 31 Local Enterprise Offices in local authorities throughout the country, saw 29,000 students from almost 500 secondary schools across the country take part.

An Tánaiste, Leo Varadkar, who took part in the ceremony, congratulated the students.

“Congratulations to not only the finalists being recognised here today, but to everyone who took part in the competition. To be a finalist in the Student Enterprise Programme is a fantastic achievement in normal times and its incredible given everything that’s happened this past year. Everyone who took part should be very proud of all that they have achieved. Special mention to their teachers, parents and all those who helped them along the way. The ability to create an idea, turn it into a business and to run that business is a skill that will be invaluable later in life.  Ireland has a proud history of entrepreneurship and no doubt those here today will all go on to achieve great things. Government will back you every step of the way.”