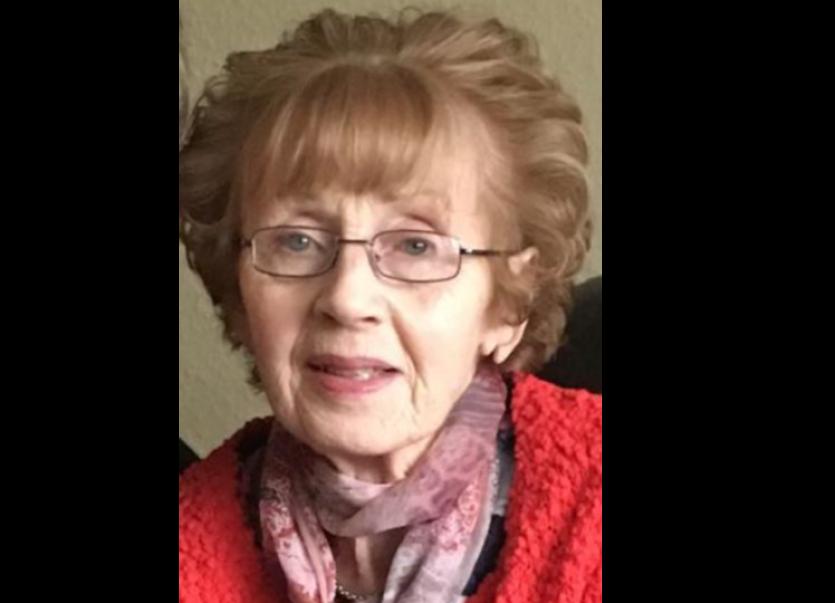 The death occurred on April 4 last of the late Eileen Lucey, nee Casey.

Eileen was born in Graigue, Kenmare, Co. Kerry not far from the scenic Black Valley.

She often reminisced about her childhood there and the simple life her family led; the killing of pigs for sausages and black pudding as well her churning the butter. They were happy times with no luxuries but her early experiences stood her well and from it she developed a steely determination and infectious sense of humour.

She attended the nearby Graigue National School, where all classes were taught in one room from juniors to seniors. Although she left school at age thirteen, she was a quick learner and a consistent hard worker throughout her long career.

She worked locally until age eighteen, including in a guest house in Kenmare, from which one evening at age sixteen she went to a dance in the nearby Carnegie Hall and met for the first time John Lucey, who in later years would become her husband. When Eileen was only eighteen she went to join her sister, Margaret, in London.

There they both worked together in various jobs in shops, factories and on the buses. The work was plentiful and there was a vibrant social scene within Irish community and in the legendary dance halls at weekends.

On February 23, 1963, on a day with heavy snowfall, Eileen married John Lucey in Deptford, East London. They settled in Edmonton, and lived there with a son, Ray, and daughter, Pauline until 1976. A relocation decision was made by Eileen and John to return to Ireland, but not Kenmare instead Tullamore, County Offaly.

Eileen returned to the world of work in 1981 and for 29 years gave sterling service in Quinnsworth / Tesco, Tullamore, where she was very popular with co-workers and customers, with a positive attitude and a warm welcoming smile.

On retirement at 70 years, she joined three local active retirement groups, sang in a choir and became a daily walker. She regularly attended social events, loved days out with friends and weekends away. In recent times she attended a local Day Care Centre, Riada House, Tullamore, and availed of some home help aids which were a great support to her only son, Ray, as her defacto voluntary carer.

It has to be acknowledged that her family is most appreciative of the support given to Eileen by the HSE Homehelps and associated agencies, Family Carers Ireland and in addition to that some great assistance by neighbours and friends. In December 2020 Eileen appeared on the cover of a magazine, Changing Ireland, as she featured in this issue outlining all valuable supports she received locally.

Eileen never forgot her roots and anything related to Kerry she followed avidly, especially Gaelic Football on television. Throughout her life she loved nothing more that traditional music and Irish dancing, with her favourite night out at local ceilis with lots of friends. Although she left the Kingdom county at the tender age of eighteen, Kenmare was never from her thoughts. With alot of patience and kindness, she forgave easily and held no grudges. She will be sadly missed by all her knew her, especially family and close friends. If we all adopted a little of her personality and outlook on life we would be far better people for it.

May she Rest in Peace