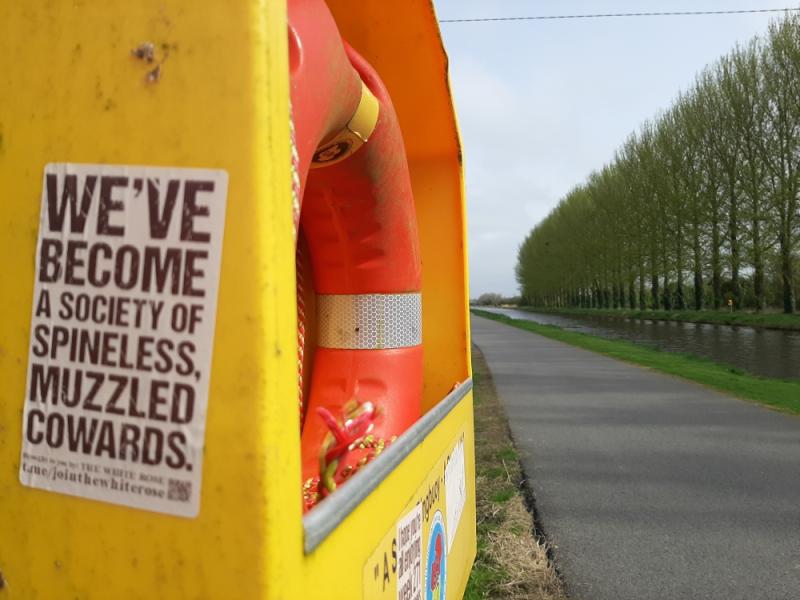 Anti-lockdown and anti-vaccination notices have appeared along the Grand Canal Greenway in Tullamore.

A series of different notices have been posted along the route and all have links to the Telegram Channel, jointhewhiterose.

The anti-lockdown and anti-vaccination channel has close to 14,000 followers across the world with two groups in Ireland, one of which is specifically for the Midlands.

The messages appeal to the public to refrain from wearing masks, likening face coverings to 'muzzles'; cast doubt on vaccinations and claim the media is the virus which is telling people “what to think”.

“You do not require anybody's permission to breathe freely. Take off the muzzle,” said one sticker.

The Channel gives a selection of posters to print and offers advice on printers to use saying it is possible to print hundreds of stickers per minute 'for dirt cheap'.

Following the storming of the Capitol in Washington DC in January, Telegram surpassed 500 million active users across the world adding over 25 million in just three days as more main-stream social media channels removed users from their platforms including former US President Donald Trump.

Tullamore-based councillor Declan Harvey has condemned the proliferation of stickers which have been placed on bins, signs and lifebuoy poles along Fiona's Way near the town.

Cllr Harvey, a local Fianna Fail representative and regular user of the Grand Canal walkway amenity, said the great majority were observing the public health advice and abiding by the Covid-19 regulations in an effort to get rid of the virus.

“Without most of the people doing their best we'd all be a lot worse off. Without them doing that and continuing to do that the whole country would be in a terrible state,” said Cllr Harvey.

The councillor also hit out against those who drop their litter on the canal bank and asked them not to leave their coffee cups on the greenway and in the vicinity of the dog foul bins.

“We had a clean-up there and will filled nine bags of rubbish. I'm calling for more dog pooh bins on both sides of the canal like the ones that are at the entrance to Fiona's Way.”