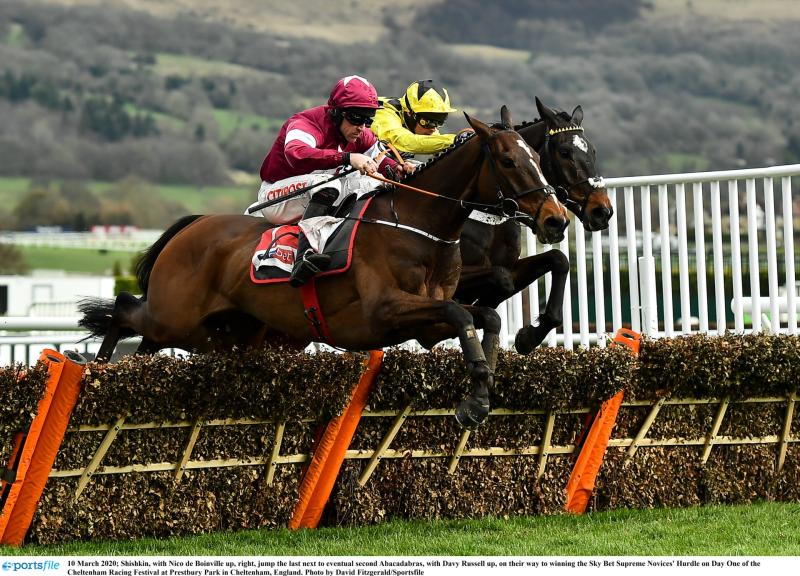 Abacadabras in action at the 2020 Cheltenham Festival

I'm not quite sure why ELDORADO ALLEN (7/1) seems to be the forgotten horse in the market here. Hitman, Fusil Raffles and The Shunter are all priced up ahead of him in the market despite him chasing home the best horse on show at last month's Cheltenham Festival, that being Nicky Henderson's Shishkin. He was 12 lengths behind Shishkin that day but finished ahead of the likes of Captain Guinness and Allmankind. He was eight and a half lengths behind Shishkin at Doncaster before that but had claimed two wins over fences prior to that, including a 19-length success of Quel Destin at Cheltenham last November. The ground won't be a problem and he can finally get his head in front again out of the shadow of Shishkin.

Ireland will be cheering on TIGER ROLL (11/2) in this as the Gigginstown star runs at Aintree but not in the showpiece on Saturday. A spat between connections and the English handicapper over the weight allocated to the two-time Grand National winner saw him pulled out and sent to this race instead. He faces classy opposition but he showed he retains all of his old spark when hacking up by 18 lengths in the Cross Country at Cheltenham. This is a different proposition but Tiger Roll is such a complete horse, he'll be hard to beat if he's on song. He jumps efficiently, isn't fazed by the ground and stamina is no issue. This race is run over 3M 2F, a full miles less than the Grand National. Clan Des Obeaux is a serious danger and a worthy favourite but can anything beat an in-form Tiger Roll around Aintree, albeit over different fences to the National.

ABACADABRAS (10/3) wasn't without a chance in last month's Champion Hurdle at Cheltenham. He had been tipped by a few shrewd judges but fell at the third hurdle and has now been dropped in here having come out of that without any issues. His form in finishing second, albeit ten lengths in arrears, to Honeysuckle in the Irish Champion Hurdle looks pretty good now after her performance at Cheltenham, especially given the fact that Sharjah (second in the Cheltenham Champion Hurdle) was nine lengths in arrears to Abacadabras on that occasion in Leopardstown. He isn't facing the same standard on Thursday and has already beaten current favourite Jason The Militant this term. I expect a big run.

DASHING PERK (12/1) will have the benefit of a top amateur on his back in the shape of Sam Waley-Cohen who has excellent experience at Aintree. This horse took well to Foxhunters when finishing third to Caid Du Berlais at Wincanton last month. He has also run well twice at Aintree, finishing fourth behind Modus in November and second behind Clan Legend in December. He is worth a chance in this sphere given that experience and the jockey booking.