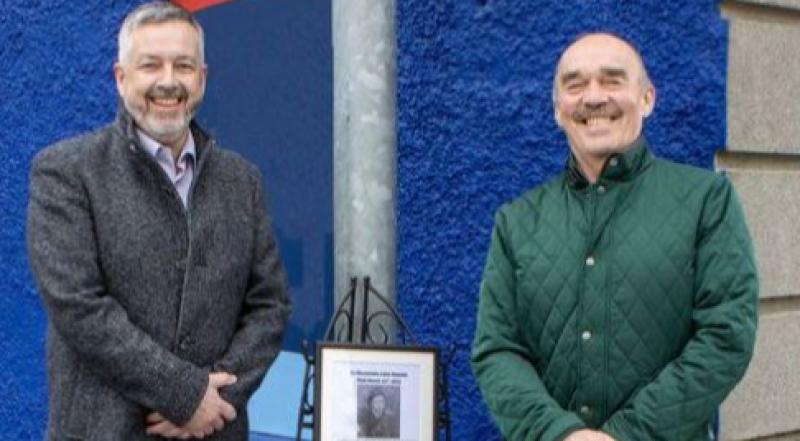 Andrew Dignam and Dominic Fleming, representing his great grand uncle Tom Fleming local IRA Commander who had worked hard treating Liam for his wounds and organised bringing him to safety

On March 21 1921 Commandant Liam Dignam,  Capt. of A Company 1st Battalion Offaly No. 2 Brigade  died in the Mater Hospital, Dublin, from a severe gunshot wound received on October 25  1920 at Main Street, Clara.

Liam and a number of his local IRA colleagues had been in discussion on the street when around 11.30pm a truck carrying Black and Tan Auxiliaries turned the corner and opened fire without warning. As Liam tried to make his escape into the doorway of ‘White's’ house he was shot in the back with the bullet hitting his kidney and grazing his spine.

His friends and colleagues pulled him through the building and made their escape through the warren of small streets and houses which existed behind Main Street at that time.

The attackers however did not follow up and sped swiftly from town. Initially it was believed their actions were an ad-hoc reaction to the killing of an RIC officer in Tullamore in the previous weeks. However local information and subsequent IRA intelligence information surmised that Liam Dignam had been recognised as a senior IRA figure locally and was specifically targeted.

Directly following the shooting Liam was removed to a neighbouring house where he was initially attended by Dr. O’Hara, the local physician, Fr. McCormack and Battalion Commandant Tom Fleming Offaly No.2 Brigade. His wounds were recognised as extremely serious, and he was brought initially incognito to the Hospital in Tullamore.

As RIC and government forces were looking for him, he was dressed up as a woman and brought to the ward with a bonnet on his head.

The Offaly (King's County) area at that time was full of unrest following a number of incidents between local Volunteers and Crown Forces.

On the weekend of October 31  Liam Dignam and a number of others were removed from Tullamore Hospital over fears for their safety as their attendance there had been noted to local authorities.

Although plans were made to look after Liam in hiding, the severity of his wounds meant he needed to be transferred to the Mater Hospital in Dublin.  Again under the cover of secrecy Liam was taken by barge along the Grand Canal to Dublin. Sadly he died on March 21  1921 in the Mater Hospital.

Liam's funeral was held on March 23 1921 with large attendance from far and wide.
In April 1922 Liam’s mother Mary sent a letter and leaflet (his memory card) to his sister Alice who emigrated to New York in 1912 (married William O’Grady 1919).

Here is an extract from Mary’s letter.. “On March 23rd we had an office and high mass and after mass the greatest procession that was ever seen in Clara to his graveside where the Rosary was recited in Irish by Rev. Father Smyth and answered by a vast multitude of people. There were ten priests at the mass and the day was like a day in June. It was kept like a holiday—all shops closed, the factory off and all work in the town suspended until after two o’clock.It was all carried out splendid and there is one thing certain, that as long as Ireland is Ireland your dear brother Willie will never be forgotten. I only wish you were here to see and know what was thought about Poor Willie, it would make you proud to have a Brother to do so much for his country. Even though he lost his life his dying [words] were if I could only creep down to the Boys I would do the same again for Poor Old Ireland. During the procession all the school children stood to attention in both schools and it was splendid . . .”