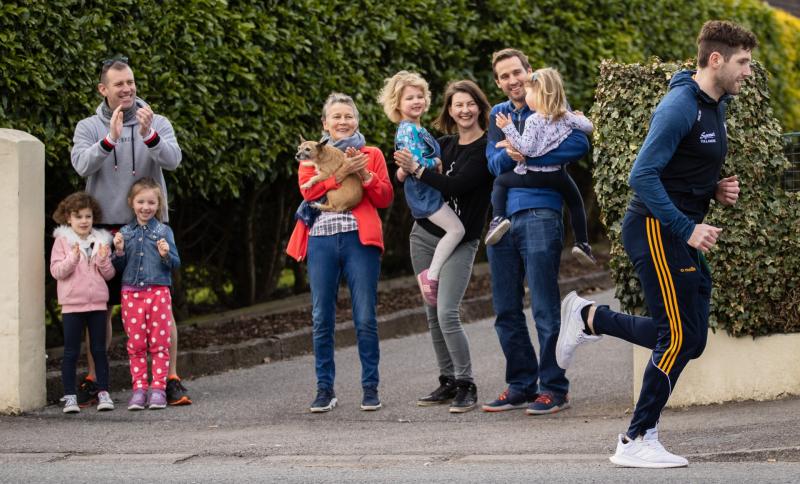 Tullamore GAA, Camogie and Ladies Football Clubs raised in excess of €8,000 for motor neurone disease and homeless causes through a relay marathon which was staged last weekend.

The initiative was the brainchild of Tullamore senior football manager Niall Stack and a number of his players, who wanted to put their weight behind club legend and two-time All-Ireland winner Paddy Fenning’s last fundraising campaign, which he set in motion before his passing from motor neurone disease in May of last year.

With the Tullamore hurling, camogie and ladies football teams subsequently coming on board, momentum swelled behind the relay marathon, which had over 180 participants over the course of last Friday, Saturday and Sunday in tandem with a highly effective social media campaign coordinated by Tullamore GAA PRO Aoife Marron, which helped to drive donations online.

As of Monday afternoon, some €8,250 had been donated through the website, paddyfenningwalk.com, since this particular initiative was launched last month. The website has generated close on €27,000 in all, with the relay marathon breaking the €90,000 mark for the entire Paddy Fenning Walk campaign.

There were 22 teams of eight runners, with club stalwarts as far away as Australia and America taking part, while the Castletown GAA under-13s in Wexford even got involved owing to a link with Tullamore native Mick McGuire, a former teammate of Paddy Fenning’s who now lives in the south-east.

Each individual was required to complete 5.3km each to make up the marathon distance of 42.2km. A number of others also took part in an individual capacity.

Many of the participants passed Paddy Fenning’s family home on the Clara Road while completing their run over the weekend, with recently-crowned Press Photographer of the Year James Crombie capturing long-serving Tullamore senior footballer and former Offaly captain Paul McConway as he was cheered on by Paddy’s wife Kathryn and family during his leg of the marathon.

The Paddy Fenning Walk for IMNDA and Offaly Homeless was launched before a huge gathering at the Tullamore Court Hotel in February of last year with the target of raising €150,000, to be split between motor neurone disease research and support services as well as local homeless causes.

The campaign was due to culminate in a walk along the banks of the Grand Canal in Tullamore last June but had to be postponed due to the Covid-19 crisis. It will be rescheduled for later in the year, once it is safe to do so.

Over 1,000 sponsorship cards have been distributed with a number of top prizes on offer, with the campaign’s website also accepting contributions separately.

Organising committee chairman Joe Stewart was fulsome in his praise of the three clubs for lighting a spark under the project again.

He commented: “Paddy would have been extremely proud of the efforts from the Tullamore mens and ladies footballers, hurlers and camogie players and all of those that they brought with them to participate in last weekend’s event. On behalf of our committee, I wish to sincerely thank the organisers, participants and everyone who donated so generously to this cause in honour of Paddy.

“It’s been a real shot in the arm for the fundraiser at a time when collecting money is extremely difficult for obvious reasons. The €8,250 - and counting - that has been raised drives us well past the €90,000 mark overall. We look forward to rebooting the fundraiser once Government restrictions are lifted and staging the walk later in the year. In the meantime, we will continue to accept donations through our website, paddyfenningwalk.com.”